I greatly enjoyed your 2018 debut romantic fantasy novel, Empire of Sand, so I was eager for Realm of Ash, your recently-published follow up. The two books are interconnected despite being centered on different characters, so I recommend reading Empire of Sand first. Besides filling out the world and clarifying some things, Empire of Sand is worth reading in its own right. 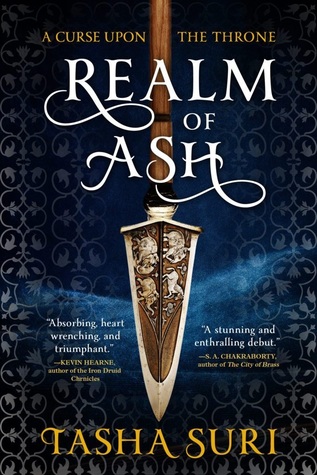 In Realm of Ash, Arwa, sister to the heroine of the previous novel, is stalked by one of the daiva. Daiva are dangerous creatures and children of the gods. Arwa is half-Amrithi, and the Amrithi people, though persecuted, have the power to ward off daiva with their blood. They are descendants of the daiva and the daiva are sworn not to take their lives.

Arwa is also half-Ambhan. Her Ambhan father is a nobleman and once governed the province of Irinah. But when he tried to prevent her sister Mehr’s unwanted marriage, decreed by the Maha (a religious leader with the capacity to live forever), he was disgraced and Arwa’s family lost its high standing. Now the long-lived Maha is dead. Since his death, a curse has blighted the Ambhan empire. Mehr, Arwa’s older sister, is believed to be dead too.

Arwa doesn’t know why this particular daiva is stalking her, but the last time she saw it was at Darez Fort, during a massacre that killed her husband and his soldiers. Arwa only survived by drawing a circle of her blood around herself. She fears it was her blood that lured the daiva to Darez Fort in the first place and that death follows in her wake.

The book opens when Arwa arrives at a refuge for widows. As a widow, Arwa cannot remarry and she doesn’t want to be a dependent in her parents’ household, so she has chosen the refuge instead. It’s her only alternative and is not uncomfortable, since it houses noblewomen.

Arwa’s Ambhan mother (or rather, her stepmother, whom Arwa thinks of as her mother) raised Arwa to deny her biological mother’s Amrithi heritage so that she would not be persecuted. In order to attract a powerful Ambhan husband, Arwa sublimated her needs and desires and became the perfect demure and gentle bride.

Arwa and her husband were not compatible but she mourns his death and the deaths of his men. The widows in the refuge are gossipy and Arwa’s future depends on their acceptance, so Arwa hides the role she and her Amrithi blood played in the massacre.

In the refuge Arwa meets Gulshera, an older widow, and Gulshera discerns that Arwa is hiding something. It’s evident to Arwa that Gulshera sends information to someone in the capital city of Jah Ambha, and that this someone is in a position of power. Arwa is determined not to open up to Gulshera.

Her plan is shattered when the daiva who dogs her appears at the refuge and Arwa’s uses her blood to ward it off. There is no hiding Arwa’s heritage after that, so Arwa shares the truth with Gulshera and offers her service to Gulshera’s correspondent. That person turns out be the emperor’s daughter, Princess Jihan.

Jihan has use for a woman with Amrithi blood, and she requires Arwa and Gulshera to travel to Jah Ambha and enter the palace of Akhtar, one of the princes. Jihan runs the palace and rules over the women’s part of it. Ambhan noblewomen do not mingle with men; to do so would be a blow to their reputations. Nevertheless, Jihan sends Arwa to a tomb within the women’s part of the palace, a tomb that hides a man.

Zahir is Jihan’s illegitimate half-brother. Usually an emperor’s illegitimate children are considered blessed and given property and position. But Zahir does not have either. For reasons that eventually become clear, he is something of an outcast, and Jihan shelters him from discovery while he pursues spiritual knowledge, knowledge that is considered heresy.

Zahir is attractive to Arwa. He has a penetrating gaze and a considerate, thoughtful demeanor. He asks Arwa to join him in a ritual that will allow them both to travel into the realm of ash, a place where the memories of the dead can be acquired. Arwa’s Amrithi blood and her presence enable them to get further in this endeavor than Zahir has managed on his own. But the realm of ash is a dangerous place. To go too far into the memories of the dead may mean losing one’s sense of self and identity.

Arwa throws herself into Zahir’s service willingly, with the goal of ending the blight on the empire. If they can reach and obtain the Maha’s ash, his memories, it’s possible they can learn how the Maha sustained the empire’s strength and prosperity. This knowledge they may be the key to the empire’s salvation.

Pursuing this goal brings Arwa and Zahir closer, despite the proscription against a widow’s remarriage. To safeguard her honor Arwa has to battle not only her own incipient feelings for Zahir but also Jihan’s wounding suggestion that she “make him happy.”

Soon enough, Zahir and Arwa, are caught in a net of palace intrigue. Jihan schemes on Akhtar’s behalf and Akhtar is not the kindest person. Nevertheless he is preferable to Parviz, another of the emperor’s sons. Parviz persecutes anyone he deems a heretic and as he and Akhatar compete for the throne, his ruthlessness threatens Zahir and Arwa’s lives. Can they find a way to save the empire? And what will they do when what they learn in the realm of ash threatens their mission?

Like Empire of Sand, Realm of Ash is a high-stakes novel. My heart was in my throat more than once.

While Arwa is not as indomitable as Mehr, her journey, one of breaking free from the yoke of selflessness and self-abnegation, also feels vital.

Arwa once knew how to erase her needs in favor of her husband’s, how speak with softness and diplomacy if at all (this was more told than shown; I would have loved more flashbacks to her backstory so that I could connect the past soft, diplomatic Arwa with the present day Arwa, who had a rebellious streak). But now the trick has escaped her. Having spent so many years repressing who she is for the sake of others— her father, her stepmother, her husband—here she learns how to set herself free.

At the same time, Arwa cares about the survival of the empire’s citizens and, as time goes on, about Zahir’s well-being. And when she encounters the ashen memories of her lost Amrithi ancestors, a new vista of knowledge opens to her.

Zahir is also a standout character and he makes a terrific love-interest for Arwa. He is a seeker of knowledge, a student of poetry written by others who have entered the realm of ash and of the clues contained within it. And as he gets to know Arwa, he learns her too. He studies her needs and emotions. His perceptiveness is one of his most appealing qualities. Another is his willingness to give Arwa his love and his loyalty despite the risk to himself.

The secondary characters are etched sharply in limited strokes. In just a few paragraphs, we learn so much about them—from their flaws and blind spots to their strengths and desires, and to their loyalties, whether fixed or shifting.

Then there is the mythology of the world. The setting feels so real, even when the characters occupy an amorphous place like the realm of ash in their dreams. Wakeful reality is at least as multidimensional, just as dangerous, and it too can be deceptive. The novel kept this reader on the edge of her seat.

In Empire of Sand Mehr was a memorable character. Arwa is at least as complex in Realm of Ash but somewhat less memorable, I felt. Arwa’s motivations are stronger, though; there was more than one point in Empire of Sand where Mehr made an unwise choice that seemed contrived to further the novel’s plot. Realm of Ash has no such mistakes. Everything Arwa and Zahir do makes perfect sense.

Realm of Ash takes the reader on a dark journey fraught with danger. But while in Empire of Sand things looked bleak for a while there and the middle was excruciatingly painful, Realm of Ash is still dark and emotional but not as gut-wrenching.

My most major caveat about this novel is that for most of the book Arwa and Zahir didn’t have as much agency as I wanted for them. This was necessary to a story about finding and claiming agency. Nevertheless, that aspect didn’t make for easy reading. It was hard to read about them being at the mercy of people who did not have their best interests in mind. Still, I am happy to recommend the book to lovers of romantic fantasy. B/B+.