“Children have a place and it’s anywhere I’m not!”

It was one off-the-cuff remark. But when it goes viral, Alec McAvoy is labeled the playboy CEO of Best for Baby–who hates kids!

Enter Julia Stillwell, image consultant extraordinaire. The widowed mom of two has a knack for changing public opinion, and she’ll teach Alec all he needs to know. But once they start this makeover, they don’t want to stop…and that’s when one little kiss leads to many, many others!

So now Julia’s worked her magic, but is Alec’s transformation only skin-deep? Or can this hunky executive convince her that he is ready to become a family man–so long as it’s with Julia?

First I just have to get this off my chest. What is with the goofballs on this cover? Honestly, I’m glad I read this as an ebook and didn’t have to see these two each time I picked the book up. Which makes me kind of sad since an ice cream cone is featured in the story. I’m fascinated by “spin doctors” and how they spring into action whenever a public figure does or says something stupid. Given the power of the media and blogs, it’s not too much of a stretch to believe how much damage could result from this sort of careless remark from a CEO. 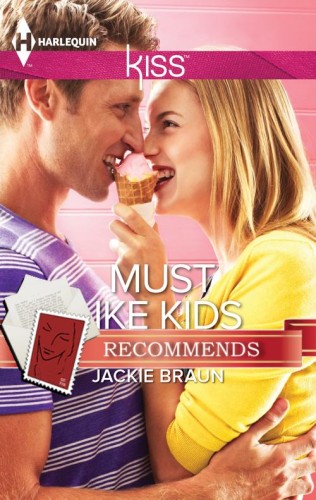 The story starts out well with a realistic rather than “meet cute” meeting. Alec’s made major faux pas, with resultant effects to his job and company stock which in this media age is something we’ve all seen. Julia’s professional, even though she thinks he’s handsome, and keeps from staring with her tongue hanging out or rubbing herself against him like a cat in heat. Julia is also very good at what she does and proceeds to put a blitz job out to rehab Alec’s ratings among the “families with children” set. But it’s not an easy job, no “1,2,3, snap!” it’s done. Julia has a forceful enough personality to haul Alec in a few times and that plus the results she gets finally win him over. Smart, capable woman – score 1.

Alec knows he isn’t comfortable with children. He’s an only child who was basically raised in boarding schools while being ignored by his jet set parents and who hasn’t “done” relationships with long term goals. Yet he doesn’t hate children. He, okay – a little reluctantly, goes along with his board of directors when they lay down the law about him getting his public image spiffed and the company stock back up. He is smart enough to see the need and doesn’t fight Julia just to be an asshole. He genuinely tries and slowly begins to change as a person, not just as someone who wants to get into Julia’s panties and make his board happy. Hero who isn’t an asshat – score 2.

The relationship builds slowly but steadily. There isn’t a quick leap for the bed and the bedroom door is firmly closed. I don’t happen to mind that at all as I enjoy seeing a couple grow closer emotionally as well as sexually and I get a lot of the emotional here. Everything isn’t smooth sailing and when the occasion calls for it, I don’t mind seeing each of them get frustrated and yes a little mad at times. They are well grounded, fleshed out and their character arcs are believable. I never felt either one was rushing or forcing anything and they both had the maturity to pull back when it was needed, especially Alec when he knew that right then there was no going forward anymore until Julia had worked out where she wanted them to go. Julia’s final realization of what she wanted in her life and how not having Alec in it was depriving not only herself but also her children of a component that would make them whole was a great way to bring the story to almost a close. The 8 months before the epilogue clinched it. Time allowed for everyone to feel the relationship is solid – score 3.

I enjoyed the gentle humor inherent in the story and chuckled a few times at the events. They exchange confidences as well as body fluid which even Alec realizes is a major step further in their relationship as is the fact that she helps him to find a house that feels like a home instead of merely a McMansion photo spread. Danielle and Colin aren’t plot moppits. Julia is first and foremost a single mom who openly tells Alec that the need to take care of her children after her husband’s death pulled her through that devastating time. They are her number one priority and define how Alec first gets to know her. Her relationship with her children shows him what he missed from his own jet-set, financially profligate, absent parents and makes him admire her more. Julia keeps her childrens’ opinions in mind about her time with Alec but factors those in with her own wants and needs. Background characterization that remains consistent throughout the story – score 4 and a solid B+ from me