REVIEW: Mnevermind 1: The Persistence of Memory by Jordan Castillo Price 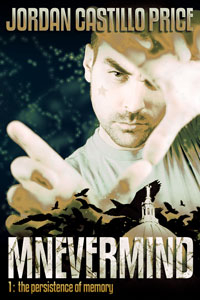 While forgetting your problems won’t solve them, it does seem like it would make life a heck of a lot easier. Daniel thought so once. Now he knows better. He and Big Dan have always been close, which makes it all the more difficult to break the daily news: the last five years were nothing like his father remembers.

They’re both professionals in the memory field—they even run their own memory palace. So shouldn’t they be able to figure out a way to overwrite the persistent false memory that’s wreaking havoc on both of their lives? Daniel thought he was holding it together, but the situation seems to be sliding out of control. Now even his own equipment has turned against him, reminding him he hasn’t had a date in ages by taunting him with flashes of an elusive man in black that only he can see.

Is it some quirk of the circuitry, or is Daniel headed down the same path to fantasy-land as his old man?

The sequel to this book was just released, but because I have not reviewed the first book I decided to reread it and start writing my reviews in the proper order.

I think one of the many reasons I enjoy your books is because they are so unpredictable. I never know what to expect when I start a new story. As the blurb states, this book is at least partially about memories or more specifically about mnems.

Apparently, in this world anybody can pay for the service of experiencing certain mnems for a few hours, and while the specific experience of being in the mnem will fade in a day or two (because so many problems would arise if they won’t), the client will remember the feeling of being happy. Daniel is a mnemographer, he is making sure his clients (in a memory palace that he runs with his father) will be safe when they enter and exit a mnem. Usually it is safe, but something went wrong when they were experimenting and creating a new mnem package in the store, and when Daniel’s dad tested it, he ended up with a permanent false memory in which his wife (Daniel’s mother) never leaves him. That incident happened a year before story starts and she left five years earlier than that. So now Daniel has to have a conversation with his father every day to tell him that mom is not on vacation but has left them. As you can guess, this is not a conversation Daniel likes to have with his Dad, because he does not like breaking his father’s heart on a regular basis.

I really liked Daniel. I liked that he is 45 years old when the story starts – I still feel that vast majority of the guys which live in m/m romances are in their mid-twenties (there is some improvement but in my opinion not nearly enough) and I am always happy when the hero is older than that age. I was very touched by his relationship with his father, I saw how much he loved Big Dan and while I did not see him spending pages wallowing in angst about being responsible for his father’s predicament (he was trying to design /improve new mnem package which went wrong in only one test – when his dad did it), I had no doubts about just how responsible he felt.

I was even more interested in Daniel when his (I hope) love interest appeared and he had to figure out whether the guy was real or a product of his brain while being in the mnem. I thought that the second man was presented to me very effectively, because as a reader I was also racking my brain with Daniel and hoping for this mystery man to be real and already was annoyed that he may not be.

“Or I meant to, anyway. A flap of wings and a loud caw startled me so badly that I dropped it. It disappeared before it hit the remembered linoleum.
I found a crow perched on the shelf beside me, where it had pecked open a box of animal crackers. It stood over the box, hovering possessively, and cocked its head. Its black feathers had an iridescent sheen, and its black talons were sharp enough to do some serious damage.

It gave an agitated flap of its wings, and a feather drifted down toward the spot where I’d meant to drive the exit peg. The blue-black feather swayed on the air, shimmered and disappeared”

I thought the book set up the beginning of the romance wonderfully, but this story was mostly about Daniel, about his relationship with his father and about his everyday work with giving people happy memories (no matter how short the sequences are, the feelings last for quite a while). This is not the first story that I read which plays with the theme of false memories in one way or another, but I definitely thought that it brought its own twist to it. I liked it and I cannot wait to start the second part of this trilogy.

This story’s length is 50250 words, so it is a short novel or a long novella, I guess. It is supposed to be the first part of a trilogy (according to JCP at least) and while it does not end with a cliffhanger, it does not provide any closure on the romance or on Daniel’s dad storyline. It completely made sense to me, but some readers might want to wait and read it when the trilogy is complete.