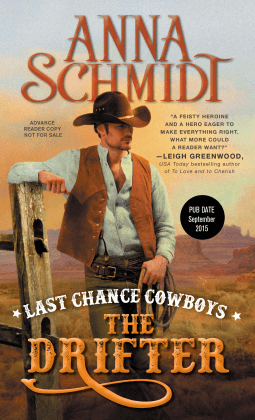 Caught between a greedy corporation and a desperate love of the land, Maria Porterfield barely has time to mourn her father’s death. If her family is to survive, it’ll be up to her to take charge-but she can’t do it alone. When a mysterious drifter rides into town, the handsome cowboy seems like an answer to her prayers. But Chet isn’t interested in settling down, no matter how tempting the offer…

Chet made his way West looking for a fresh start-the last thing he wants is to get involved in someone else’s fight. But something about Maria awakens a powerful need to protect the fierce beauty at all costs. He never thought he’d find love, but as danger presses in, he may find there’s more beyond the next horizon than just another long and dusty trail.

I’ve enjoyed the inspies of yours I’ve read and I’ve been hankering for some more historical Westerns in my reading lately so when I saw this at netgalley, I requested it double quick. While the plot is not new, the characters are well drawn and interesting and I was hanging on every page flip to see who ended up being the villain and how the ranch would be saved.

Since it wasn’t listed as an inspie, I wasn’t sure how hot the romance would be. There are kisses, an illegitimate baby (not the main characters’) and a lovely, meaningful consummation scene between Maria and Chet. By the time this arrives, these two are sure of their feelings and it feels like an affirmation rather than just scratching an itch.

Can I just say that I love the name choice for the hero? “Chester” sounds old fashioned but then these are people from the 1880s so the fact that you avoided trendy names sits just fine with me. Chet is an honorable man – something we can tell from the start. Yes, he has something, or someone, from his past who will show up but it’s not of his doing. And when he’s faced with the situation, he does the best he can and far more than most people would expect of him. He works hard, treats animals with kindness and doesn’t ignore or belittle anyone due to their social status. Chet does more than just tell Maria how he feels about her, he shows it by wanting to fight her battles and take on her burdens. Folks notice these things, in their quiet ways.

Maria Porterfield has the world on her shoulders but somehow she manages to keep her back straight and head high. With her father dead, her oldest brother gone, two younger siblings and a mother bowed with grief, she’s still determined to keep the greedy Big Cattle Company from taking over the family ranch. Maria has grit and determination though thankfully she doesn’t charge headlong into danger just to show she’s fiery. She uses her head and the knowledge her father taught her. She treats her ranch hands with respect and deals honorably with others though she’s not averse to putting a certain snooty woman in her place when the need arises. Maria also shows her feelings for Chet in a powerful way – she trusts what he tells her.

The novel is packed with realistic conflict. The Porterfield family has some internal struggles, Maria and the “is he or is he not the villain” foreman clash, Chet has to deal with the Evil Other Woman, the Big Cattle Co keeps up the sabotage and Maria has to be twice as good for the other (older male) ranchers to treat her as the Little Lady instead of as an equal. I was kept guessing about some characters and was surprised about others though seeds had been sown showing that no one could be trusted.

I take it that this is to be the start of a series. This events of this book stay focused but certain characters are introduced and a bit of possible plot is revealed. One of the involved characters jumped off the page from the minute she was introduced and frankly I can’t wait to see her take center stage. I also hope to see more of the other strong female characters. Readers wanting a good old fashioned Western romance need look no further than this one. B+