REVIEW: Ghost in the Machine by Barbara J. Hancock

Your 88 page post-apocalyptic romance novella, Ghost in the Machine, published by Samhain, was unlike any other romance I’ve read before. As I was reading it, I kept thinking of movies like the original “Terminator” and “28 Days Later” – dark yet ultimately uplifting stories about human beings struggling to survive in a world gone grim and terrifying. 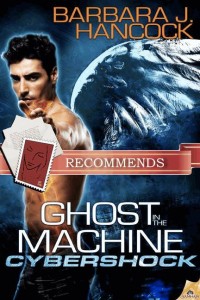 Ghost in the Machine is narrated largely in the first person POV of Bet, a young woman who was left orphaned in the wake of the invasion of New York City by a biological computer known as the SoulEater.

The SoulEater consumes humans and mutates them into the Shadows, who seek out more humans for its consumption when they aren’t glitching by haunting their own pasts. After being located by Shadows, the humans (known as Warmbloods) are collected by the SoulEater’s other creations, the human/machine hybrids called Sweepers, who bring the Warmbloods to the SoulEater and enable it to make more Sweepers and Shadows.

Since the SoulEater’s invasion, New York has been covered in ashes and inhabited by growing numbers of Shadows. The number of Warmbloods has dwindled. Bet is a survivor but a tired one. Ever since her parents died years before, she has raised and sheltered her younger brother Douglas, foraging in the Shadows’ dangerous terrain to feed him.

Bet is on one such trip, having just found a precious can of peaches with which to feed her brother, when the warren in which she lives with Douglas is invaded by Sweepers. She abandons caution and with it, her pretense of being a Shadow, to race back to the warren. In doing so she draws the Shadows’ attention, but even so, she still arrives at the warren too late: Douglas has been taken by the Sweepers.

The realization is devastating because for years, protecting Douglas was the sole thing that had given Bet’s life purpose. When she makes her decision to pursue the Sweepers who took Douglas, it’s not merely because she is devoted to her brother but also because her own survival isn’t enough to sustain her.

I rise and center my pack between my shoulder blades. The precious can of peaches is my promise. One day Douglas will eat them. One day he’ll enjoy every juicy bite. I won’t give in to my hunger. Not for one single slice.

I don’t look back at the warren as I walk away. Beneath my feet are Sweeper tracks in ash. Shadows are coming. I feel their threat closing in. Logic says I should run in the opposite direction and avoid them at all cost. My heart and soul say otherwise. And until those things are lost or eaten, I’ll follow them.

The Shadows do indeed attempt to track Bet and one, shaped like a spider with a human head, attacks her. It’s at this point that she is rescued by a beautiful man in a soldier’s body armor. But the man has shimmering wings, and eyes hazy with static. He is not really a man, but another Shadow.

Except that unlike other Shadows, he has eyes that indicate he may be capable of independent thought. A different kind of Shadow, and one who has just saved Bet’s life. But Bet, taking no chances, uses her disruptor on him and sends him back to his maker, the SoulEater.

The Shadow, once a soldier named Gabriel Sanchez, is a ghost in the SoulEater’s machine. And he returns, resurrected, an hour later. He tells Bet that each time that happens, it is harder to pull himself free.

Bet finds herself talking to him. It is beyond dangerous to do so, since Gabriel is not just the ghost of a soldier who died years before, but the SoulEater’s creation. Is the SoulEater filing away whatever she tells Gabriel? Is it toying with her? Will it use Gabriel to attack her? Bet isn’t sure if she has a death wish, now that Douglas is gone, but when Gabriel offers to help her save Douglas, she gives in to her weakness and allows him to come along.

She knows he can’t be trusted. She knows that even if he wants to help her, he is still the SoulEater’s creature. And yet she also knows that she can’t save Douglas without Gabriel’s help. Worst of all, she recognizes that she feels desire for this Shadow, and wanting to find the sense of connection that has been missing from her life with him, with a Shadow, is the most frightening thing of all.

All that I have just summarized happens in the first ten percent of the novella. Because the story unfolded in compelling and unexpected ways, I don’t want to spoil more of it for readers.

There are a few flaws to this novella – I didn’t understand how the Shadows worked, technology wise, or always get what was happening on the SoulEater’s end of things. A question rose in my mind about where the food Bet foraged was produced (rice was mentioned to be a staple). And I also questioned whether Bet really would have been able to shelter Douglas to the degree she had in such a world.

But for the most part, I didn’t care. I didn’t care because the atmosphere of the world you created was so haunting, the spare language a perfect match for it, and the characters’ situation wholeheartedly absorbing.

Bet was such a focused survivor, though nearing the end of her emotional and physical rope. Gabriel literally pulled himself together from bits of memory – memory of the humanity of the solider he had once been. Both of them kept going, kept putting one foot in front of the other in a world where bleakness threatened, where little was left but the need to survive.

They took tremendous risks in the attempt to save Douglas, and in the attempt to allow themselves to feel something for one another. More than just a romance, this was also a story about the struggle to hold on to one’s humanity, and about the qualities which make the human race worth saving. It left me filled with hope as only stories that go into the dark places and come out on the other side can do. High B+.