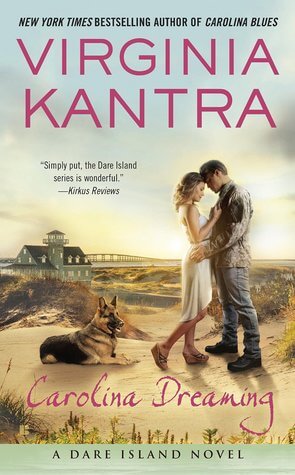 I’ve enjoyed all your Dare Island books, but I think this one might just be my favourite of the lot (so far at least).

Gabe Murphy is a former Marine, who met Luke Fletcher in boot camp. Gabe’s home life was troubled and he enlisted at age 17 after being kicked out of home by his mother. His father was abusive but his mother would not leave. When Gabe was finally able to fight back, his mother chose his dad over him. He has forgiven his mother long since and he knows her situation was complicated.  But it’s something that has deeply scarred him.

Luke brought Gabe home with him sometimes and from the Fletcher family, Gabe learned what a large and loving family could be like. Now, after feeling like a complete failure at life for so long, he makes his way back to Dare Island in the hope of making a new start and maybe finding a home of his own.

After getting out of the Marines, Gabe worked in the oil industry for a while. In a fight outside a bar while he was defending a woman who was being assaulted, a man died and Gabe was arrested for murder. He served nine months in jail waiting for trial and was eventually acquitted, but the entire experience has only led him to feel more like a failure. He knows that just being in jail for that length of time raises eyebrows, notwithstanding he was found not guilty.

His re-entry onto Dare Island isn’t auspicious. Hank Clark, an officer of the Dare Island police, rousts him when he’s crossing the bridge. It’s clear Officer Clark sizes Gabe up as a homeless drifter and someone likely to cause trouble. He’d be happy if Gabe turned around and kept going. Luke, however, is far more welcoming.

“Isn’t that what the jury decided in your case? You were acquitted. I saw the verdict. Not guilty on all counts.”

“That doesn’t change what happened. A man died. I killed him.”

“Is that what you told the arresting officers?”

Gabe’s jaw set. “I screw up, I take responsibility.”

“Jesus, Gabe,” Luke said with exasperated affection. “I swear, if somebody wanted to beat you, you’d hand them the stick.”

Luke takes Gabe for a coffee and a catch up to Jane’s Sweet Tea House and there, Gabe first sees Jane Clark, the owner/proprietor (and also the daughter of Officer Hank Clark). Jane represents all the things Gabe wants but thinks he cannot have. She’s pretty, soft and warm. She’s friendly and nurturing and, even though she’s clearly wary, she is nonetheless kind to him.

Jane, for her part, looks at Gabe and, initially, sees exactly the kind of man she is drawn to but also, very likely, exactly the kind of man who, like her ex-husband, could leave bruises. She resolves to keep her distance. She’s smarter now and learned her lesson with Travis (her ex). Besides, she has a seven year old son, Aidan, and she needs to be responsible for his sake.

Gabe starts working construction for Sam Grady and helping out on an addition/renovation to Jane’s Sweet Tea House so she and Gabe cross paths often. She finds out that Gabe actually bears only a superficial resemblance to Travis. He is, in all the ways that matter, a far better man. Still, Jane is distrustful of her own judgement. She made a big mistake with Travis and she can’t afford for Aidan to pay the price for her making another mistake.  She also feels the burden of being a failure in the eyes of her father. Well, she thinks that’s how he sees her. Readers are privy to Hank’s POV occasionally through the book and we know that his perspective is very different. I liked how you showed how the same actions could be interpreted through different lenses to lead to vastly different conclusions. I also liked that you didn’t feel it necessary to resolve everything about these differences.

Before long, Gabe begins to feel at home on Dare Island. He is welcomed by the Fletchers and he makes a connection with Jane and her son. He even finds himself unexpectedly adopted by a stray dog. Gabe’s attraction to Jane only gets stronger the more he gets to know her.

Jane, for her part, weakens in her resolve to stay away from Gabe. She thinks maybe a fling couldn’t hurt anyone. (Ha! Jane. Ha!) After an embarrassed and flustered proposition results in some creative kitchen sex, Jane discovers that one night with Gabe is most definitely not enough.

Perhaps the imagery in the book could be seen as a little overdone. Both Jane and Gabe are beaten down by life; although Jane has things mostly together. She runs a successful business and supports her son relatively comfortably. Gabe’s dog has obviously been beaten before; he shies away from anyone trying to touch his head (I know that actually most dogs would have this kind of reaction regardless of whether they’d been beaten, but I believed the dog had been previously mistreated here.) And the way the dog reacts in those circumstances – shying away – is a metaphor for Gabe. It’s not at all hidden. However, I didn’t find it too much. I didn’t think you laboured the point and I didn’t feel Gabe was so gone into self-pity/self-disgust he became whiny and annoying.

He beats himself up a little at the beginning and allows himself to react rashly on occasion, but he soon resolves to be a better man; to take a breath before he speaks and to “not be an asshole”. His history has led to genuine scars and I found your rendering of him very deft. He pushed so many of my “excellent hero” buttons – he’s a (spiritually) wounded warrior, a protector and care-giver, a strong silent type and a hard worker. He has low expectations for himself because that’s how he’s been treated by so many people in his life. It’s easy to see that someone who genuinely loves him for himself, who sees the best in him (and there is a lot to be seen) will have his wholehearted loyalty and devotion forever and ever.  There’s also this:

Gabe flushed. He wanted Jane. Imagined having her in just about every way a man could have a woman.

But she wasn’t a fucking hill to be taken. He respected her, the way she raised her son, ran her business, fed strays and the elderly. She had made something of herself, something solid and fine and permanent.

My oh my I did love Gabe.

I also loved Jane. She’s a woman who likes to nurture people with her food but she’s been reluctant to accept help from others, interpreting that as weakness and/or failure. Gabe sees her strength and resilience but wants to be her soft place to land. He wants her to be able to lean on him occasionally. Funnily enough, Jane sees pretty much the same thing in him.

My only real quibble with the book was that I thought Gabe was being a little unreasonable (okay, quite a bit actually) in expecting Jane to commit to him after only five weeks of knowing each other. While I totally believed in them as a couple and bought their HEA lock, stock and barrel, the kind of commitment Gabe asked for after such a short time was still way premature for me. However, I was glad that the couple didn’t stay at odds for very long at all and Gabe realised he was being a bit silly to want everything so quickly.

I was also glad you didn’t take the obvious road in the ending.

It was all gloriously satisfying and delightful. I was totally charmed by Carolina Dreaming. A definite recommend from me. Grade: B+/A-