REVIEW x 2: Ten Things I Hate About the Duke by Loretta Chase

In Ten Things to I Hate About the Duke, your new historical romance, Lucius, the Duke of Ashmont meets Cassandra Pomfret when he fires a gun into the air to disperse a crowd. Cassandra’s horses to startle and her carriage crashes. Injured in the accident is her groom, Keefe, a former jockey as well as her friend and mentor. 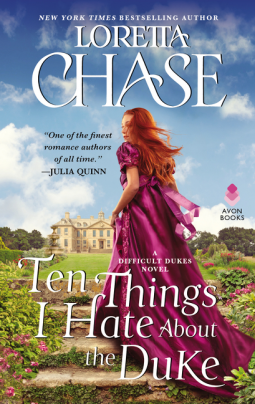 Cassandra is angry and upset. Since they are in the countryside, she, her maid, Ashmont, his friend Morris and Keefe all repair to a nearby inn. But then Cassandra’s maid takes off (it’s not entirely clear why) and Cassandra’s reputation is almost ruined. Ashmont proposes and, after she refuses him, pays off all the witnesses and goes back to London on his uncle’s advice.

(It seemed far-fetched to me that Ashmont successfully ensured every witness’s silence; there was a small crowd at the scene of the accident and more people at the inn.)

Ashmont, a feckless, devil-may-care rogue until then, is smitten by Cassandra and sets out to win her heart. In the process he learns to grow up and become a steadier and sweeter man. He has never had to work hard for anything in his life before, and now he has to learn the ways of the smart, opinionated and feminist Cassandra. And she keeps him on his toes, causing him to think more than he ever has in the past.

Cassandra is afraid to trust Ashmont. Not only has he injured Keefe, he also broke her heart though he has no idea that he ever did. They first met as child and a youth, on a magical night of looking at the stars, Ashmont pointing out the constellations. But Ashmont doesn’t remember it, much less the night of Cassandra’s debut in society, when he paid far more attention to a prank he executed than to the girl who’d loved him from afar.

Ashmont’s friend Morris is infatuated with Hyacinth, Cassandra’s gorgeous and sweet-natured sister. Morris’s mother, Lady Bartham, hates Lady deGriffith, Cassandra and Hyacinth’s mother, due to something from the distant past. Lady Bartham seethes with rivalry and bad intentions, and neither the duke’s interest in Cassandra nor her son’s devotion to Hyacinth is something she intends to let stand.

We also learn about the Andromeda Society, a ladies’ charitable club Cassandra founded and leads. It is a feminist endeavor—members learn self-defense and other useful skills, and Cassandra tries to help any who are in distress. Ashmont offers to help.

Still, Cassandra circles Lucius warily whenever he appears in her vicinity as happens more and more often. It gets harder for both to stifle their attraction. Can Ashmont win Cassandra over without implicating her in a scandal after all?

The biggest issue I had with this book was that it was sedate, especially so in the first 40%. I waited for something significant to happen and not much did. The near-scandal of the carriage accident went nowhere. Based on the blurb I expected the accident would cause Cassandra and Ashmont to marry in haste and that the book would hinge on a marriage of convenience. But even after it became evident that the book centered on a courtship the pacing was uneven. The book made for ideal bedtime reading because for roughly 80% it was easy to put down.

I did like some things. Cassandra was a different kind of heroine, sharp in mind and in demeanor both. I liked her resolve. I liked that she cared about working-class women and that rather than mere lip service on the author’s part, this was a strong and genuine commitment. But I wanted her to thaw a little sooner; she was a little chilly and somewhat humorless. I felt held at arm’s length from her.

Lucius was clueless in an often-endearing way, and reminded me a bit of Rupert from Mr. Impossible, a character I remember as among the author’s best. I loved the way Lucius forced himself to be patient so as to win Cassandra over even though it wasn’t in his nature.

There were a few times, though, when I felt he should have known or noticed something on his own years earlier. In these instances his cluelessness caused him to seem not just ignorant due to his privilege but also puddle deep. That made me respect him less.

Here are some examples:

When he discovers that Britain still supports the slave trade:

“It was deuced interesting. I’d no idea. Might have to dust off my seat in the House of Lords. Heard from Morris that Mr. Stanley brought in a bill late last night—this morning, rather—for abolishing slavery in the colonies. Didn’t realize we still had that sort of thing going on. I was so astounded, I forgot I was being shaved.”

After Cassandra and Hyacinth spontaneously playact in a public place:

“I’m amazed my aunt let it go as far as she did. Young ladies are not supposed to make spectacles of themselves. We’re not to be observed having fun in public.”

He’d never thought about that, until very recently. He’d always thought of respectable young women as boring. He was only beginning to realize they weren’t given much choice.

And after he visits a rough part of London and sees a family mistreated by their landlord:

One small part of London, he said, half to himself. “So many lives inside. Places like this everywhere. Somebody overzealous. Somebody cheating people who can’t protect themselves.”

Not something he’d ever considered. This wasn’t a world he paid attention to.

Lucius isn’t heartless, but he seems to have been a bit callous before meeting Cassandra.

There is one scene where Ashmont does something to ameliorate a bad situation and Cassandra is blown away. That felt like an overreaction. His action was good, thoughtful, valuable, but it seemed like an obvious one to take. I didn’t understand why Cassandra gave him so much credit for clearing a low bar.

I liked every one of Cassandra’s family members. Hyacinth was my favorite, and not merely for her beauty and softheartedness. In terms of emotional acuity, she was quicker and more perceptive than Cassandra. I would love to read a whole book about someone like her.

Cassandra’s mother was lovely and had a core of steel.

When a conflict arises with Lady Bartham, she dismantles it neatly and without fanfare.

The women in Cassandra’s family (with her quick-to-catch-on Aunt Elizabeth aka Lady Charles Ancaster, counted among them) were the most heroic figures in the book.

Cassandra’s father was a fun character, a man torn between being a strict parent and a soft one. Early in the book he lays down a law: that not just Cassandra but also Hyacinth will not be allowed to attend society events (“dinners, dejeuners, fête champêtres, balls, routs, picnics, water parties, plays, ballet, opera”) until Cassandra marries. Later he regrets that edict but won’t back down.

I got hung up on a smattering of anachronistic language: “smear campaign” (the first OED citation is from 1938), “do it blindfolded with my hands tied behind my back” (the earliest citation I found in Google Books is from 1997), “mentally off-balance” (1899 per the same source), “get out while you can” (ditto, 1890s), and “arsehole,” in its meaning of (quoting from the OED), “A stupid, irritating, or despicable person; a person who behaves contemptibly” (the earliest citation in the OED is from 1928).

Five anachronisms is not bad at all; a lot of historicals have more. But this kind of awareness on my part is less likely to happen when I’m fully absorbed, so it points to that greater issue.

Balancing that out were enjoyable, amusing turns of phrase like this one:

At that moment she discovered that Hyacinth stood alone, with no Aunt Elizabeth in sight, and the gentlemen had begun to wash up about her, like the detritus that washed up on the riverside.

Cassandra thrust her way through the crowd and hurried round the back into the stall. As deGriffith’s Gorgon hove into view, the masculine flotsam and jetsam oozed back into the throng.

Ten Things I Hate About the Duke had some great elements but these didn’t come together into an engaging whole. I could take or leave swathes of this book. A lot of reviewers I follow love it, though, so I encourage readers to try it. C+/B-.

→ Janine
Previous article: REVIEW: Hanukkah Cookies with Sprinkles by David A. Adler, Illustrated by Jeffrey Ebbeler
Next Post: REVIEW: The Beast and the Bethany by Jack Meggitt-Phillips