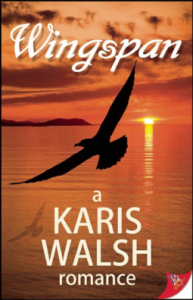 When architect Kendall Pearson finds an injured osprey on her property, she expects to simply drop it off at a local wild bird rehabilitation center and be done with it. Quick and painless, like every other relationship she has. But wildlife biologist Bailey Chase has other plans for Ken. First, as surgical assistant, and second, as the designer for her new raptor sanctuary.

Bailey protects her privacy with the vigilance of a hawk, hiding in her rescue center where she has complete control over her life and her work. Isolated on Washington’s Olympic Peninsula, she’s surrounded by natural beauty and plenty of solitude. Until sexy Ken Pearson walks in with a wounded bird and Bailey finds her life has been invaded by more than just an extra beak to feed.

Sometimes pain is invisible, and only love can soar over protective barriers and heal a wounded heart.

I’ve mentioned in several of my past book reviews that I enjoy reading about characters with different hobbies, jobs, or careers. Since I turn into a big, old softie when I read about wild animal rehab efforts, I immediately requested a copy of your book when I saw it on Netgalley.

Kendall – known throughout the book as Ken – and Bailey are each wounded souls who have closed themselves off from the world. They are so separated from others it’s almost as if they’re surrounded by a force field, a brick wall and a moat.

Ken has submerged herself into looking like everyone else, acting like everyone else and seeking out girlfriends and lovers who fit the profile of whom an upwardly mobile, young professional lesbian should be seen with. Never mind if she feels stifled – the order of the day is Thou Shalt Not Stand Out. Yet every once in a while her actual personality insists on rearing its head as when she can’t resist the vintage Vette or the lovely piece of undeveloped property way out in the country.

Bailey has known since childhood that the world views her as an oddball. Her parents volatile marriage drove her into the woods around their home where she discovered a kinship with birds that she finally turned into her life’s vocation after graduation from Vet School. The world is welcome to bring her injured birds but after that she prefers that it go the hell away and leave her to do what she loves and does better than most.

The way these two are brought together is both realistic as well as an organic utilization of their professions. Ken finds an injured osprey on her property and Bailey is the closest as well as best rehabber around. Bailey has reluctantly accepted funding from the WSU Vet School but that also entails a new annex being built on her land to allow for students as well as interns being sent to work with her. When architect Ken gets assigned to design the new flight cages and building, the two are thrown together.

Ken’s and Bailey’s solo and joint journeys back from their strict isolation is fairly obviously laid out and followed through. Though it felt real and was handled well, there were almost no surprises along the way. Point B followed point A which lead to point C even as I guessed what would happen when the story reached section D. But that’s not to say the story is boring or badly written as I enjoyed reading about the struggles behind successfully helping injured birds – but I’ll pass on feeding an owlet mouse bits no matter how cute he might look – and the bursts of genius behind inspired buildings which are more than a box.

Bailey and Ken are central to the self change of the other – and I do like that each woman reached her own decision to begin to alter her life and accept love into it rather than being driven to it. Bailey is a bit more open to it but there were times when I wanted to shake Ken out of her martyrdom. It was also a bit too easy that one or two major confrontation was all that stood between these two finally coming to grips with their years long issues. I did enjoy the book but I just wish the storyline wasn’t quite so easy to see coming. C+/B-