It is exciting to me that m/m romance is (just) beginning (I believe) to become mainstream and that publishers such as Penguin, through their digital arm, Intermix, are embracing diversity.  It is early days, but I have high hopes that we’ll be seeing more m/m or GLBTQ romance from the Big 6.

Immediately before reading My Cowboy Heart, I read a gripping romantic suspense.  That may have been a mistake – there are no stalkers, serial killers or terrorists in this book. On the other hand, a change of pace is nice too.   My Cowboy Heart  is a very gentle romance, and sweet, notwithstanding the spicy sex scenes (on par with your average contemporary m/f).  There is an innocence and  charm to the tale but it is not high on action.

Malloy is the fo 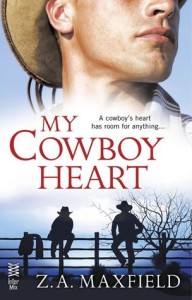 reman of the J-Bar ranch in New Mexico.  He was the foster child of ranch owners, Crandall and Emma Jenkins, having arrived at the ranch as a surly, frightened boy at the age of 14.  Now, at 32, the ranch and the Jenkins family are his life.  He is a solitary type of person and he reads as quite a bit older than his stated age.  In fact, shortly after we meet the other hero of the story, Crispin Carrasco, Crispin expresses surprise at Malloy’s relative youth.  So, it seems Malloy looks older as well.  In my head, I pegged him as about 45 and it kind of jarred when his real age came up. Perhaps Malloy is just an old soul.

The story begins when the Jenkins’ are off for an extended holiday with their daughters and their daughters’ families, to Orlando, Florida and the joys of DisneyWorld.  Just before leaving, Crandall Jenkins lets Malloy know that he’s offered a job to the nephew of a family friend, 25 year old Crispin who is out and proud and who talks a blue streak.   Crandall asks Malloy to keep an eye out for Crispin and ensure there is no trouble with the other two hands (the ranch having only a few staff over winter).

Malloy has never had any serious romantic relationships – he has had the occasional “arrangement” with local women from town but he has never before considered that he might be attracted to men.  However, soon after he meets Crispin, he’s changing his view about his heterosexual status.  It is actually a fairly gentle coming out and it doesn’t take all that long for Malloy to accept his homosexuality, even though he is forced to re-think just about everything he believed about himself.

I’d only known Crispin Carrasco for a few days, and I was already all tangled up in him. Like Crispin was light and I was a june bug, but everything I’d ever believed about myself was a window between us and thinking about him was just another way to smash myself against it.

Crispin (his Native American/Latino parents were actors and named him after the actor Crispin Glover from Back to the Future) is very open, very in touch with his emotions and, even though he has significant trauma in his own past, he has an air of innocence about him.  He is sweet and affectionate and kind of a like a big sleek puppy dog, even though he’s 25.  As for the trauma in Crispin’s past, it was really only touched upon.  It comes to light after a triggering event and he lets his temper show.  After that, events of the book kind of took over and what, if anything, Crispin was going to do about it was never really mentioned again.  I’m not sure really whether I liked it or not.  On the one hand, it was implicit acknowledgement that some things mess you up and you never really get over them, just learn (mostly) to deal.  On the other, it was kind of… left. But maybe that was a good thing.

For all that Crispin seems an open book, baring his painful past to Malloy wasn’t easy for him.  This doesn’t stop him from pushing and prying into Malloy’s childhood and asking questions about Malloy’s remaining biological family – questions Malloy is not keen on entertaining.

“Christ, Crispin. Could I just deal with being gay today? Do we have to pry open the rest of my life and fuck with that too?”

Even though it is Crispin who is the more experienced partner, Malloy is no passive participant.  When Crispin blows hot and cold (and not in the good way either – at least, not then), Malloy makes it plain he’s not about to be used:

“I ain’t your shrink. I ain’t your teddy bear. I sure as hell ain’t gonna be your yo-yo. And if you come on to me like this, if you curl up all over me and make eyes and shit, you’d better be prepared to fuck me like the fleet’s in, or I will knock you down.”

When tragedy strikes, Malloy’s and Crispin’s new relationship is tested.  They are “safe” at the J-Bar.  The society is fairly close and relatively non-judgemental.  Apart from some surliness from one of the hands, Jim (who has his own issues), Malloy is basically accepted for who he is by those on the ranch – including the Jenkins family.  There is a fairytale quality to the story in that respect I think.  Malloy makes decisions to be with Crispin, to be out and proud (even though he’ll never be as naturally demonstrative as Crispin is) but he doesn’t really come up against all that much opposition or homophobic judgement.  The book does acknowledge that gay cowboys aren’t really well accepted elsewhere but it’s not like that at the J-Bar.

The intimate first person POV reveals Malloy’s deep emotions even though he doesn’t like to put them on display.  He is particularly close to Crandall Jenkins and his feelings about the man and his place on the J-Bar brought me to tears more than once.

Even though the romance is fast – most of the book takes place in a very few weeks, there was a gentle pace to the novel – kind of like a languid trail ride on a lazy horse.  That’s not to say it was boring.  It was not. But it wasn’t action-packed by any stretch.

I did feel that Malloy and Crispin had found, in each other, their soul mates, even though there was no Big Moment when it was put to the test.  It was a sweet and enjoyable character-driven romance.  I give it a B-.