REVIEW: Iris After The Incident by Mina V. Esguerra 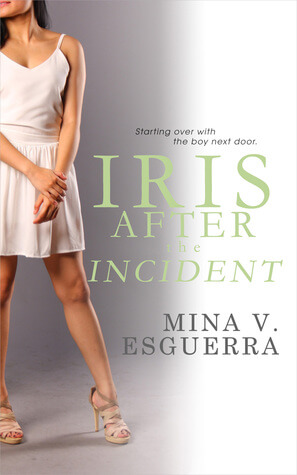 My friend Kat from Book Thingo recommended this book to me. It has a somewhat unusual premise that got my attention: Both the heroine and hero are hiding/recovering from a sex scandal. In Iris’s case, a sex tape she made with her now-ex-boyfriend got out by accident and now everyone with an internet connection and the interest to look (not even very hard) knows what she looks like naked and having sex. She’s a young woman in the Philippines and her family are horrified. It put her job at a not-for-profit foundation which funds scholarships for women in STEM fields at risk. She had to move out of home. She barely has a relationship with her parents anymore and what there is is stilted and awkward. Her brother, Liam, and she still get along but as he lives at home with their parents it is difficult to connect.

Iris moved into a small apartment in NV Park in Manila. She has been keeping herself to herself for nearly two years. She’s had counselling (she still has counselling) and is starting to feel like she could tackle life in the “new normal”. Her employer has stuck by her and she’s even starting to make friends in the complex.

Then she gets stuck in a lift with a handsome young man one night and other parts of her awaken again. They don’t introduce themselves by name initially. It is made clear that this man also has a scandal in his past. They are “9M” and “9J” for a little while. There is clear attraction and after a little while they decide to confess to each other their names, knowing full well that it’s only a Google search away for all their secrets to be known.

The young man is Gio Mello. I won’t go into what his scandal is because it takes some time for the details to be revealed and I don’t want to spoil it. But suffice to say that it is a sex scandal of a different flavour. It happened but there were some extenuating circumstances which mean he’s still in the “good guy” category.

Gio is only a year out from his scandal. He still doesn’t have a cell phone. His strategy for dealing with things is to ignore it and hide away from any notifications or mentions. Iris, on the other hand, searches all of her mentions out. For her knowledge is power and for him ignorance is bliss.

Because of their unique circumstances, Iris and Gio understand what the other has been through and is going through and, is perhaps more forgiving than someone without a sex scandal blowing up on the internet in their past. There is more to them than that however. It is a thing they have in common but also, they enjoy each other’s company and have a strong physical chemistry.

I found the book very easy to read and I liked both Iris and Gio very much. Although, as the story is told entirely from Iris’s POV, Gio was at times a little opaque. There were times when I didn’t quite understand the subtext of conversations. There wasn’t quite enough on page for me to understand what the characters meant by certain things they said, even while it was obvious there was something I was missing. That might say more about the way I read and process information I guess.

In Iris’s job she reviews applications for scholarships from young women who have to answer questions in 500 words or less. The book uses this device to reveal some things about Iris and her history as she imagines herself being asked to write her answer to such questions as Why are you still in town then, making it difficult for them who are ashamed of you now, Iris Len-Larioca? Please state your answer in 500 words or less.”

There was a part of the story regarding Liam and Gio that felt unresolved to me; I’d have liked that tied off.

I liked the “BISHes”  (Beautiful. Independent. Survivors of Humiliation) very much. They’re a group of women who take Iris under their collective wings and there she finds friends who don’t judge her for her choices and give her a safe space to be herself.

Iris unashamedly enjoys sex and that was good to see, even after sex cost her so much. By the end of the book in particular, she’s comfortable in her own skin again in a way that I felt would mean she was protected from future wounding about “The Incident”. I think there will always be things which will sting for Iris but it’s not the devastation it once was.

Both Gio and Iris read very realistically to me, in terms of their reactions to what had happened and their approach to dealing with it. Both had to adjust their approaches a little to get to their HEA.

I also liked the setting of contemporary Manila and that both characters were Filipino. While not explicitly being a book about the Philippines, the culture both Gio and Iris come from informs their personalities and their choices as much as anything else and the setting was a major part of the story. In a weird way however, the story could have been set almost anywhere (in the Western world at least) – the same tale could be told in small town America or suburban Australia.

I found myself a little lost at times as I struggled to understand some of the nuance I was clearly missing and Gio lost a few points with the conflict which arose between them at the inevitable black moment. I loved how Iris refused to be ashamed and advocated for herself and I believed Gio was more than angry words said when he was under a lot of pressure from his family and anxious about stepping out of his protective bubble. And, I believed he was genuinely sorry. His apology came with meaningful action which gave me confidence in their future.