Please note: If you think this series might be of interest to you may wish to avoid this review—it’s full of spoilers for books one through three. Start with my review of Pretty Pretty Boys, book one in the series, instead.

I got hooked on your Hazard and Somerset series this past summer. Book one, Pretty Pretty Boys, had a mystery that didn’t work that well for me but the incipient romance between Hazard, a brusque, hard-boiled, gay police detective and Somerset, his charming, friendly, bisexual partner, worked and then some. 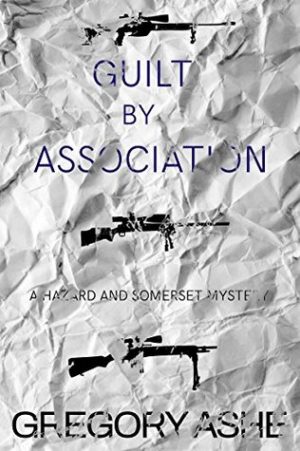 Even though I gave that book a C+/B- grade and the second book, Transposition, a C-, I stuck with the series because I loved the relationship, liked Hazard a lot, and saw plenty of potential in the writing. My persistence was rewarded with the enthralling book three, Paternity Case, an A- for me. I was so glad I had kept reading. When I finished that book, in which Somers finally faces up to his love for Hazard, I was “on tenterhooks,” as Georgette Heyer might say, to see what would happen in this, book four.

Guilt by Association begins with Emery Hazard stuck at the Pretty Pretty, a gay dance club, because his much younger (twenty-five to Emery’s thirty-four) boyfriend, Nico, insisted they go there. Hazard is not enjoying the dancing, so he goes to sit at the bar. A dapper stranger hits on him there. All that is forgotten, though, when Hazard sees another man kissing Nico on the dance floor.

Hazard has been contemplating breaking up with Nico, but that doesn’t prevent him from jumping down from his barstool and attacking the kisser. Hazard’s last boyfriend cheated on him, so the kiss pushes a button.

Hazard succeeds in pounding the offending man to a pulp and that alienates Nico. Marcus, a friend of Nico’s who has been waiting for an opportunity to make a pass at Nico himself, intervenes, and Nico decides to take a few days away from Hazard and stay with Marcus. Hazard doesn’t understand what he did wrong.

Somerset, his partner, is thrilled at first (he too has been waiting for Hazard and Nico to split), but when he sees how down Hazard is about the whole thing, he puts Hazard’s happiness ahead of his own and assures his partner that he’ll help him get Nico back.

A case intrudes on all this; Sheriff Bingham has been killed. The sheriff, under a cloud of scandal, had been trying to combat protests calling for his resignation. He invited a number of friends and acquaintances to help him figure out how to do that and was out practicing skeet shooting with some of them when he was shot to death from a distant hill.

Hazard and Somers interview witnesses and potential suspects but everyone’s story matches and no one saw the shooter well enough to make an ID. Somers and Hazard assume they’ll get the case; after all, they are Wahredua, Missouri’s best detectives and have proven themselves by solving a string of murders. But the mayor assigns the investigation to a special prosecutor from out of town, Sal Castella, and Castella demotes them to background checks allowing detectives from other law enforcement agencies take over the actual investigation.

Hazard recognizes Castella: he’s the slick, handsome stranger who hit on him as the Pretty Pretty on Friday night. Now he is all business with Hazard, perhaps because he knows that Hazard is aware that his claim that he only arrived in Wahredua on Saturday is false. He does try to flirt with Somers, though.

Just as Somers and Hazard decide to find a way of investigating in secret, Castella shoots the case back to them—the list of suspects has been narrowed down to three and Castella wants Somers and Hazard to identify which of the three is the killer. Castella also makes a move on Nico, much to Hazard’s anger and chagrin.

Hazard smells something off about Castella—after all, he’s lying about when he arrived in Wahredua—but Somers puts that down to Hazard’s general dislike of Castella and possessiveness of Nico. Meanwhile, Somers struggles to patch up his marriage (he and his wife, Cora, have been estranged for eight months) and with how to deal with the love he feels for Hazard.

Will Hazard and Nico get back together? What about Somers and Cora? Is Castella involved in the murder? And is the killer one of the three suspects or someone else altogether?

Guilt by Association has a lot of good qualities that the first two books lacked but it’s not as strong as the third. The stakes in this mystery are lower than they were in Paternity Case (it’s hard to top the near-killing of Somers’s father in that one). The mystery is convoluted, one of the most annoying characters in the series makes an appearance here, and part of the resolution is over the top. In the end, though wobbly, it mostly holds together.

On the relationship front, in the middle of the book there’s a holding pattern in Somers’s thoughts and actions. For a little while it feels like having figured out he loves his partner in the last book, he should get around to acting on it. But I couldn’t mind it too much because he was being selfless for the sake of Hazard’s happiness. It was generous as well as sweet for him to try to help Hazard get Nico back despite his own love for Hazard.

There’s a scene along these lines that tugged at my heart:

“We’ll start with the text,” Somers said. “Then flowers. A card. Maybe chocolates. Dinner at the Moulin Vert. Just like I told you.”

“That’s cheesy. He’s never going to fall for it.”

“It feels like a trick. Why can’t I just tell him that stuff, and he can move back in?”

“We had a fight. I apologize. He comes back. I don’t see why that’s so crazy.”

“You’re not joking. You know what you are? You’re hopeless.”

“Quit looking so happy with yourself,” Hazard grumbled, dragging his phone out of his pocket, “and tell me what I’m supposed to say.”

“Hey,” Somers started. “I’m really sorry about last night. And about today.” He paused. “I’m going to give you some options, and then you put in what you want, ok?”

“I love you. You’re the most important person in my life. I’ve never been happier than when we’re together. You’re a part of me that I didn’t even know I was missing. Even when we’re fighting, even when you’re giving me shit, I know you care about me more than anyone else in the whole world. I know you put up with a lot from me. I love you for that. I love you for the amazing man that you are.” Somers’s throat was thick. His eyes misted, and he blinked rapidly.

Still texting, Hazard nodded. “Damn, Somers. That’s amazing. Where’d you come up with that?” And he looked up then, the long, dark hair wavy across his forehead, those scarecrow eyes full of gold fire, a pink glow along his cheekbones. So beautiful. And so goddamn oblivious.

“Just rolls off the tongue. You’ve got what you want?”

I love Hazard as much as ever, and after book three, I love Somers too. I love the contrasts between them—in their manner of dealing with people, Somers with diplomacy and smiles, Hazard with scowls and brusqueness. In their manner of dealing with the blows the world deals them, too—Somers by crashing into the bottom of a bottle, Hazard by closing up.

Their painful history as teens (Somerset was one of three boys who bullied Hazard horribly) crops up, as it has in every book. Not as much here as in books one and three, but it still has a presence, and one that makes their friendship an act of trust, especially for Hazard, but also for Somers, who is sharply aware that no matter how he behaves now, it is impossible for him to change the past.

The series is developed around their difficulty in communicating. It works because it’s believable at least 90% of the time in these books. As frustrated as I got with Somers (Tell him already, I kept thinking), I understood his fears. How can you trust someone you hurt so much not to reject you? And when I keep in mind it’s only been four months since the series began and they met again as adults, it makes even more sense.

Nico is fleshed out in this book, although in his case we see his less attractive, less mature side. On the other hand, it’s easy to understand his bitterness over Hazard’s professional partnership and friendship with Somers because it’s as clear to us as it is to him that there’s more there than just platonic feelings. I think most people would feel jealous and possessive in Nico’s shoes.

And then there is Cora, Somers’s estranged wife. She’s developed further here, too. I loved that she was a good person and an interesting one. She plays an important role in the book and one that I appreciated.

This is the book where Hazard and Somers finally, finally have sex for the first time. Based on past books I was expecting something sexier and more edgy than what we got. It was sweet and tender but I wanted more heat.

Despite the weaknesses in the first couple of books and even in this one, I feel that this series is worth sticking with. Beyond what happens in each book, there is an overarching plot that each book fits into, and a long arc for Hazard and Somers’s relationship. So the whole here is greater than the sum of its parts. B-.