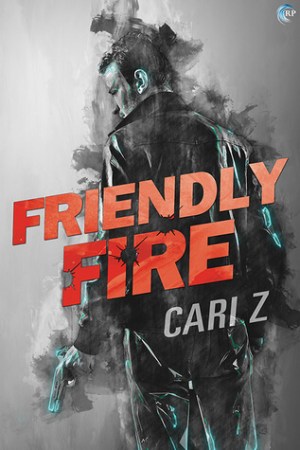 In a battle of wills, stubbornness could cost you your life.

Elliot McKenzie is the king of reinvention. Five years after losing his job and his lover and almost going to prison, his self-help program, Charmed Life, is more successful than he’d ever dreamed. He thinks he’s put his sordid past firmly behind him, until he starts receiving cryptic threats . . . and realizes it might not be as over as he’d hoped.

Security expert Lennox West has been lost since a deadly skirmish in Afghanistan led to his forced retirement from the Army. His PTSD makes helping his ex raise their daughter a challenge. When his ex’s sister asks him to set her boss up with a security system, Lennox isn’t expecting anyone like Elliot McKenzie — a man who captures his attention and makes him feel relaxed for the first time since leaving the service.

But Elliot is dangerously stubborn. Even as the threats against him escalate, he refuses to involve the police, and Lennox fears that stubbornness could kill him. A battle of wills ensues that brings them closer to each other than either man expected. But if the threats turn real, they might not live long enough to get their future together.

I have read several SFF m/m works from you and really liked them, so when I saw that you had written a story which looked like a contemporary romantic suspense m/m, I could not wait to start reading it.

Unfortunately it ended up being a mixed bag for me. I thought it was well written and I liked the characters better than in many other m/m books I have read, so I can easily see this book rated much higher by a different reader. But I had several issues with plot and characterization.

First and foremost I was eager to read a redemption story, and Elliott worked his ass off to redeem himself for his past in the eyes of society and in his own eyes. I liked the guy a whole lot, and I liked that he took full responsibility for what he did, even if most of happened was a result of his inaction. Not all of it, though and I thought that if the punishment for his past had been prison, it would have been a deserving one. As I said, if ever there has been a flawed character I’ve really liked, Elliott was certainly one of them.

But you know what? It would have been really nice to understand what the heck Elliott was doing with his company. He built a multi-million (or billion) dollar empire based on his “Charmed Life” and all I could gather is that he was making motivational videos for his clients (who were what? Celebrities who went or could have gone to prison in their past? I was not sure). But clearly motivational videos were only part of his business. At some point it was mentioned that the clients offered something people signed up for (similar to Facebook) and they had forums, but I still had no idea what these people were paying money for.

Initially I was worried that what Elliott was doing was scamming people – but clearly he was not, clearly he was offering some kind of service for them to turn their life around even more? What was that?

Eventually I was so frustrated that I decided to call Elliott a glorified motivational speaker and leave it at that. I guess his videos were worth that much money? I have no idea. Please writers, I want to read about multidimensional human beings in romances and clearly his job was very important to Elliott for so many reasons. It would have been nice to have a clear picture of what it was in my head after I was done with the book.

Lennox’s work as a security specialist was not hard to describe – I got a complete understanding of what it was that he was doing. So maybe Elliott’s job was left vague on purpose, but I failed to understand that purpose.

I really liked the romance – their first hookup happens pretty fast after they first meet as client and contractor. Elliott’s secretary Selena was Lennox’s ex sister-in-law, and Lennox is still on good terms with her and with his ex-wife Gaby as well. When Elliott acquires a stalker, Selena arranges for Lennox to pitch his security system to Elliott. Having the two start as client and contractor did not bother me at all – it was a one-time deal and their family connections introduced them, and somehow it just did not feel weird to me – maybe power deferential just was not there for me?

For both of them first hook up was mostly because of physical attraction; the rest developed more slowly throughout the book and I thought it was nicely done.

With Lennox I had a different issue, albeit not as frustrating as the one with Elliott’s work. Lennox has PTSD from his army years and he is going to a therapist and trying to treat it, etc. On the one hand I really appreciated that his variety of this illness was caused by a very specific event (one event, very traumatic) – I don’t know if my impression was correct, but I felt as if it could have been somewhat easier to treat, to help Lennox improve faster, maybe? I know I am probably totally off base with this – apologies if it is so. It is just so often PTSD in m/m romances is so severe that it makes me doubt the happy ending with a person who probably needs years of treatment before he can maintain a healthy relationship.

So I appreciated it, but it still felt that his drastic improvement happened so fast. In the beginning of the story he won’t let his 13-year-old daughter sleep over because of the time she tried to wake him from a nightmare and he hit her (reflexively, while he was still half asleep). But by the end she is going to be living with Elliott and Lennox two days a week. Yay?

The stalker threatening Elliott was the main external conflict in the story. I was extremely pissed off with Elliott’s refusal to go to the police, although I understood why he would have wanted to wait – basically the reasoning was explained well and was in line with Elliott’s character arc I thought.

The story was less a mystery for me than it was a suspense plot. Elliott correctly guessed one villain almost from very beginning – but even if he had no clue about other/s, I thought the other one was very much in the reader’s face too.

I really liked the female characters in this book. Selena was competent and displayed a no-nonsense, take no prisoners attitude in her job and in taking care of her boss’s needs, but she was also very likeable. I adored Lennox’s daughter Lee/Lea/Ophelia, who was your standard thirteen year old rebellious teenager but who also loved her father very much and wanted to spend time with him. I think Lennox’s ex-wife Gaby was the most interesting secondary character – she was by no means an evil wife or bitchy ex. Lennox remarks that they became way better friends after their divorce, when they both tried to do best by their daughter, and he was absolutely right.

Unfortunately, though, Gaby is bitchy (I believe the word is used in the book although I’m not a hundred percent sure) to everybody when she communicates with them. Again, she seemed to be a good person, but as Lee says at some point – “when mom gets worked up, she says a lot of dumb stuff. “ (paraphrase). That’s how she communicates I guess and we learn that she actually went to a therapist to work and change that part of herself – but it is still work in progress. She likes to lecture her sister (and Selena gives as good as she gets) and Lennox says at some point she should give him a benefit of the doubt before she starts lecturing (paraphrase).

I appreciated reading about an ex-wife who is a genuinely good person, but who also has a real character flaw she is trying to change.

→ Sirius
Previous article: REVIEW: The Story of Christmas by Pamela Dalton
Next Post: Open Thread for Readers for January 2017