“Jade Moon is a Fire Horse — the worst sign in the Chinese zodiac for girls, said to make them stubborn, reckless, and far too headstrong. While her family despairs of marrying her off, she dreams of traveling far beyond her tiny village, living out a story as big as her imagination.

Then a young man named Sterling Promise offers Jade Moon and her father an incredible opportunity: the chance to go to America. As they travel, Sterling Promise’s smooth manners and Jade Moon’s impulsive nature strike sparks again and again. But America in 1923 doesn’t welcome Chinese immigrants, and when they are detained at Angel Island — the so-called “Ellis Island of the West” — Jade Moon uncovers a betrayal that destroys all her dreams. To get into America, much less survive there, she will have to use every bit of her stubbornness and strength to break a new path . . . one so brave and dangerous that only a Fire Horse girl could imagine it.”

Dear Ms. Honeyman,
“Fire Horse Girl” has a truly great intro section – I loved the details about China, the world of Jade Moon and the house servant Nushi. And of snide, 10 toothed Auntie Wu. It sets the stage and shows exactly what Jade Moon needed to escape plus how limited and bound she was by tradition (as a female) and her character (as seen by the Chinese). Life would never have gotten any better for her there. The sea voyage part is also interesting – seeing Jade Moon and Sterling Promise work out their strategy and get to misunderstand each other better (evil grin). I thought it was telling that Jade Moon sees America not only as an escape from China but also a place where she can write her own story and find the freedom to be who she is. She doesn’t merely want to passively transfer her existence to a new place, she wants to actively take charge of it and change it. 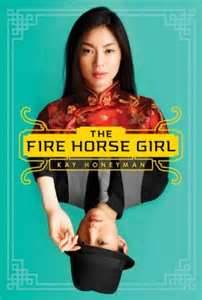 The Angel Island part bogged down a little but does present the mind numbing wait that the immigrants went through. By this time the laws were much more restrictive than earlier and certainly more so than better known Ellis Island. I was amazed to learn that days, weeks and months dragged by as the administrative wheels ground. The other “Cowherd and Weaver Girl” fairy story – different from sentimental one Nushi told Jade Moon – is one I’d love to see as the springboard for a novel. In this one Weaver Girl makes her own way to Heaven – and serves as a model for Jade Moon in real life.

I like that Jade Moon makes her own luck – even if she doesn’t see it that way. She grabs at the chances she sees and doesn’t let sentimentality stand in her way. She makes her way, fights her battles and never gives up. Though it’s intriguing to see Chinatown in the early 1920s, with things rapidly changing and the tongs fighting to regain their lost power and prominence, I felt this section dragged just a little as well. It’s a bit hard to believe that she could pull off her deceit for as long as she does, especially since she wasn’t a tomboy. Her relationship with Neil is an interesting comparison and contrast of 2 people fighting against barriers set up due to their nationalities.

Things picked up as Jade Moon shows her Fire Horse bravery by giving another girl a chance at escape from the brothels the tongs are running, and then agreeing to help the cause of locating and then freeing the other poor Chinese women forced into prostitution. That’s gutsy. I love how she still thinks and strategizes through the danger then tries to help those who have helped her. The way she’s eventually saved (and for good) is a clever use of how the Chinese see her.

The road to romance is long with twists and turns, feints and dodges. I was not truly sure about the relationship until the end. But at least her HEA knows what he’s getting into as does she. Jade Moon is a good heroine for young girls to read about. She is strong mentally as well as physically and doesn’t rely on others to save her. Plus this is a dynamite view of a chapter of immigration that probably few know well. B-