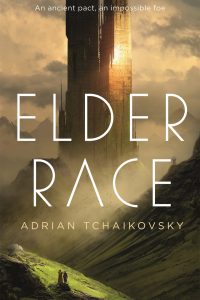 In Adrian Tchaikovsky’s Elder Race, a junior anthropologist on a distant planet must help the locals he has sworn to study to save a planet from an unbeatable foe.

Lynesse is the lowly Fourth Daughter of the queen, and always getting in the way.

But a demon is terrorizing the land, and now she’s an adult (albeit barely) and although she still gets in the way, she understands that the only way to save her people is to invoke the pact between her family and the Elder sorcerer who has inhabited the local tower for as long as her people have lived here (though none in living memory has approached it).

But Elder Nyr isn’t a sorcerer, and he is forbidden to help, for his knowledge of science tells him the threat cannot possibly be a demon…

I requested this long novella on the basis of how much I enjoyed “One Day All This Will Be Yours.” One thing I frequently hear about your stories is that they’re often different from each other and that is certainly the case here. At first I thought this would be an action adventure, “we’re gonna save the world” type of story. What I soon realized though is that that is merely a framework on which to hang the actual tale.

Lynesse Fourth Daughter ventures a second time to the tower where the sorcerer lives. Once before he aided her ancestors when danger threatened them. Now she’s arriving as a young adult (the first time she came here was as a child, more out of stubbornness and curiosity and because she wasn’t supposed to) to invoke the pact that the sorcerer had made of promised aid. If called on, he would assist those of the ancestress’s bloodline. Word has reached her mother’s kingdom that a terrible demon is loose in neighboring lands. The Queen and her councilors appear ready to dismiss it as nonsense or (maybe worse) as a possible political tool to be used if these countries become destabilized. But Lyn, raised on the fabulous stories of her ancestress and desperate to prove herself more than an embarrassment in the family, is going for broke and calling in the chit.

Nyr is taken aback when the spitting image of the woman he worked with, rode with into danger, and – it would appear – loved shows up on his doorstep. She needs his help but Nyr verbally stumbles as he tries to explain that his tools and knowledge aren’t the magic she expects nor does he think he actually can help. But he’ll go with her and her companion and see what is actually going on. By doing this, he’s once again disobeying his orders to merely observe this world that was colonized millenia ago from Earth. So what is it this rag-tag band is up against and can they defeat it?

Yes, this has (Star Trek) Prime Directive written all over it. Nyr is the last of the anthropologists who were sent out centuries after initial settlers left Earth for (in this case at least, uninhabited) planets. Some emergency recall sent the other three back home and Nyr was supposed to remain and continue observing and taking notes. But as the years have passed, he’s almost sure that whatever the emergency was, it annihilated not only his fellows but all life on Earth. In the meantime, these people have evolved so as to have forgotten that they once traversed the stars. Now those stories are mere myths.

As Nyr and the group venture on, Nyr has to face the fact that he’s probably all alone now and given the lack of any attempt to communicate with him from Earth, that is how he will remain. He has a device that allows him to compartmentalize his feelings thus freeing his mind to make more rational decisions. But he suffers behind the “mask” that it imposes on him and must revert to feeling emotions at times so as not to become overwhelmed. The reader knows what he’s thinking and his readouts show him what he would be feeling but this sort of cut me off from his character and at times made him seem distant.

The languages used on the planet, while originally from Earth, have become extremely complex and thus Nyr, Lyn, and the others speak the same (or similar) words but discover that, about some subjects, they’re all but speaking a different language. Meanings are mangled and much is lost in translation. This allows for some interesting comparisons and contrasts in their mutual understanding including one cool chapter that had Nyr’s explanation side by side with how Lyn understood what he was saying. Nyr’s anthropological observations of what he sees are at times fascinating and allow this world to be explained to us without a lot of info-dumping. Yet ultimately we only see glimpses of the whole.

It’s a good thing that Lyn decided to buck what her mother decided because the “demon” is truly horrific. I will admit to skipping over some of the paragraphs describing how it morphs living beings together into horrific masses. The means that Nyr uses to fight it are already known to the reader so there is no “where did that come from?” moments. Yet I found myself wanting more information about it and was left unsatisfied.

As a character study, both Nyr and Lyn (and to a lesser degree the other two who journey with them) go through self discovery. I found myself enjoying these bits more than the actual “let’s fight the evil threatening to destroy us.” At times that became paragraphs of gobbledygook as Nyr mused on what it could be (never answered) and how it communicated (ditto). It was more interesting to me to watch Lyn evolve into more than the screwup daughter she’s been thought to be. The ending that follows the demise of the “demon” is hopeful but I wanted a few more answers to events in the story than I got. B-