REVIEW: Close to the Wind by Zana Bell 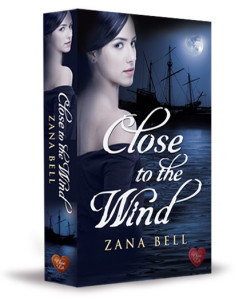 Georgiana da Silva is catapulted out of the Victorian drawing rooms and into a world of danger when she escapes her fiendish fiancé to engage in a mad dash across the world to save her brother before an unknown assassin can find him.
Meanwhile, Captain Harry Trent is setting sail for New Zealand. With a mission to complete and the law on his heels, he’s got enough trouble of his own without further complications.

Thrown together, unable to trust anyone, Georgiana and Harry are intent on fulfilling their missions despite the distractions of the other. But liberty comes at a price and the closer they get, the more they must question the true cost of being free.

I enjoyed the two Harlequin contemporaries of yours I read so I was excited when Choc Lit contacted me about reading one of your historicals. And not just any old historical but a 19th century ship board to New Zealand one. I thought, “Sign me up.”

“Chick-in-pants” novels have an additional layer of believability to be swallowed but George has been masquerading that way for years. She knows how to balance herself at dangerous heights from her circus father so ship work isn’t too difficult and, better still, she’s aware that her disguise will be hard to maintain which makes her more cautious while doing it. She pulls off the masquerade much better than most heroines I’ve read about. She revels at her freedom – much as her rebellious mother did. Georgie stays very consistent in her actions and reactions. I might see her going down the path towards trouble – especially at the end of the book – but based on how her character has been built and described, her actions make sense.

George and Harry share early humble beginnings and later rise in society which forges a bond and understanding between them. Harry is the dark horse in the action. Is he the assassin being sent to New Zealand or not? Since this possible conflict is revealed early on I wasn’t sure and there are red herrings aplenty here. Harry’s reactions to finding out Georgie’s masquerade actually seem period. He’s initially appalled at what she’s been exposed to living below decks with his rough and ready crew and refuses to allow it to continue. He will take care of this young woman who’s been thrust into his care – by her own actions, sure, but he’ll take over from now on – and return her to her rightful sphere. It takes time for him to learn the “real” Georgiana and realize that she is as she is and he loves her for it.

I enjoyed the initial scenes of George learning life at sea and discovering how she could use her circus tumbling/balancing talents up in the shrouds. She holds her own and asks for no favors. This part ended all too soon and the next shipboard section was a bit more tame. Another dark horse is introduced and the plot cleverly manages to continue the question of who is on George’s side and who is the assassin. I did wonder at the remarkable coordination of characters conveniently meeting up just when the plot requires it despite the vast distances by sea being traveled and the still relative lack of easy communication.

When everyone finally ends up in NZ, I was hoping for more descriptions of its breathtaking beauty. George and Harry marvel a bit at it but selfish me wanted more.

The final resolution of all the plot threads comes down to the wire. With few pages left – as shown by my ereader – things were still very much in the air. The true villain had been revealed but how would the rest of it end? With a convenient scene containing almost all the characters wherein lots of exposition, gunshots and arrivals of more characters just in the nick of time solve all. It was kind of a breathless charge down the backstretch. All is settled, wrong is righted, and romance triumphs. Still I’m left with a slightly unsettled feeling. Perhaps since the story is set in the mid 19th century when mores were changing, it will all work out but as one character says “there will be children” and I wonder how their parents’ reckless and adventurous spirit will bedevil them in their possible inheritance? Still I enjoyed watching George come into her own and Harry learn to love her for herself. B-