I can’t recall how this book came to my attention. It may have been Elyssa Papa who sends me links to books that feature football. It may have popped up on Goodreads. I’m not a huge YA reader and thus it isn’t a book that I would come across in my normal book browsing. 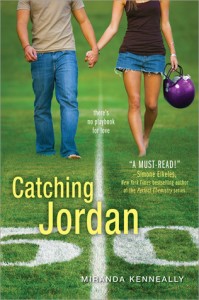 Jordan Woods isn’t just one of the guys. She is the starting quarterback for her very prominent, very successful high school.  This is not a story of a girl earning respect from her male colleagues. She has been a part of this team for years and she leads it, as most quarterbacks do.  She’s also no wimpy sized girl trying to pretend to play with the big boys.  She is over six feet tall and strong and she comes from stellar genes.  Her father is a professional football quarterback for the Tennessee Titans. Her brother is a starting quarterback for University of Tennessee and led them to the Sugar Bowl last year.

But spending a lot of time with football players doesn’t mean that Jordan’s social life is crammed with boys.  She won’t date anyone on her football team; anyone shorter than her; or pansies.  She hasn’t even kissed a boy.  The one time she was in a closet with a boy at a party, they engaged in a thumb war that turned into a shoving match.

What makes this story interesting isn’t the standard uncertain girl falls in love. In fact, the romance part of the story is the weakest and least interesting aspect. For me, the story shines in Jordan’s desire to play football on a collegiate level and her not quite estranged but almost relationship with her father. Jordan is the narrator and initially we are led to believe that Jordan’s dad just doesn’t love his daughter as much as his son. He would always go over game tape with his son. He would go to practices with his son. He would brag about his son’s accomplishments. But with Jordan, all her father ever has to say about her football playing is that he desires for her to quit.

It isn’t until later that we discover, before Jordan processes it, that her father’s resistance toward Jordan’s football choices relate more to his desire to protect her than any actual disapproval of her behavior. It is sexist, still, but it comes from a place of love and not disdain.

The romance consists of a love triangle between her wide receiver Harry and the new boy that moves to town who vies for her QB position. Unfortunately, the triangle isn’t readily believable given all of the time that Jordan spends with one character versus the other, including sleeping with the one male teammate (but platonically which is a thing I’ve encountered in more than one YA book).  The nonchalance in which Jordan treats the developing relationship and her sexual interaction with that other male seemed off to me, particularly since she was a virgin.

However, the sports aspect, the recruiting aspect, Jordan’s struggle to be accepted as an athlete based on her ability and not her sex, was engaging. In fact, I felt it was one of the most accurate portrayals of football and high school sports I had read in a long time. I’ve spent many a Friday night watching high school football players and gossiping with their parents about who has an offer to go where and which scouts are in the stands or have been at practice. I felt like the author had been in those same stands. B-