Finding your boyfriend in the shower with another woman isn’t high on Deborah Kemerton’s “best birthday presents ever” list. Her life in London shattered, she retreats to her sleepy hometown to heal her broken heart. There, she’s quickly swept up in planning a pageant to celebrate the 700th anniversary of the village church. Tasked with casting the perfect Samson, Deborah may have found her man in Josh Lancaster—onstage and off…

Fellow committee member Anne Lindsay is convinced a 12th-century crusader is buried under St. John’s. As the story goes, Hugo left for the Holy Land after his true love Maude was given in marriage to his brother. Professor Toby Duggan is equally convinced Anne is wrong, and is determined to prove it. Neither of them counts on their mutual passion for history turning into a passion for each other…

When romantic entanglements and small-town dramatics come to a head, local legend proves to be more than just a story…

A few years ago I read, and enjoyed, one of your Regency novels. At the time, I made a note that I needed to look at what else you had published. Best intentions and all that but it took until now when I saw this blurb and thought, “let’s check out a contemporary of hers.” 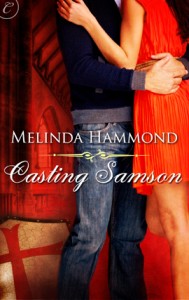 Debs starts out really needing some self confidence. But I can understand her as a person in a new environment who is dazzled by this gorgeous man who said he loved her. When she contemplates going back to London – though thankfully never back to Bernard – I did want to shake her a bit. She does become a little more confident as shown when she tells Bernard off at the end and gets mad at Josh when she imagines that he’s making fun of their village or leading her on. Debs approaches her growing relationship with Josh cautiously, as I would expect from anyone so publicly hurt in the recent past. I like this as she’s neither hurling herself at new person – which would have been out of character due to the way she’s been described – nor is she hiding in a shell and totally unwilling to venture into something new. The relationship she has with her father, who obviously loves her, is sweet and the backup she gets from her fellow villagers, who’ve known her all her life, shows the best of small town life. But I’m left with the question of why did Bernard want her back? The office management alone? Can they not find someone else to do this in all of London? I needed a better and personal reason to believe how badly he wants her to come back besides it being needed for the plot as a last minute wrench between Debs and Josh.

Josh is a sweetie who is affronted by Debs’ initial suggestion that he’s only kissing her on their outing because he’s a male and she’s available. Very little of the book is told from Josh’s POV – necessary, I know, to keep his intentions hidden til near the end – but what his friends say about him and his own actions show that he’s a good guy. Plus he’s a cat lover which scores big points from me. I could see Josh’s ultimate placement in the village coming from a mile away but it’s a nice tie up of the issue of what to do with the restaurant, a resolution of Kemmerton’s health issues and Deb’s future.

The second romance didn’t work quite as well for me. More background is shown for Anne than for Toby and thus I was more emotionally invested in her happiness. Toby I didn’t know so much beyond his fixation on the church issue. I can see why Anne wants to investigate and get proof but Toby starts off strident with no reason ever given beyond an academic’s interest in the outcome. Unfortunately it makes him come off as an old fart who is just a stick about it. Then, the morning after of their date is a scene straight out of romance plotting central: hot sex, the Big Mis and flouncing off in a huff followed by a quick make up. Toby just shows up and says “I’m sorry” and Anne apologizes and that’s fixed? I needed a bit more resolution here. As for the Templar Church issue, I figured that “something” would happen in order to finish off this plot thread. Yes, I could see these things coming but still it’s nicely and believably done.

The medieval part of the story is interesting and bittersweet. I’m glad that you let it play out as you did. Any other resolution would have cheapened what Hugo did and how Maude and Andrew reacted. I found it strange that since Hugo was the one who escaped and told the world what happened at the battle it wasn’t known he survived but perhaps that sort of info wasn’t recorded or got lost. As Toby said, voices dim over the centuries.

Lots of romance readers have been indicating that they’re bored with the current worship of small town life. Here it isn’t a problem for me for two reasons: London isn’t denigrated and as an American reader, getting a glimpse of the English countryside is still fun. Gammon steak and Cumberland sausage? I must investigate more about pub food. Everything about the village and its people is important to them. Bernard might think it’s all bucolic nattering about trivial things but to them, it’s central. I kind of hope this small town life isn’t lost as someone needs to care about the St John’s Churches of the world. The pageant, which is a nice coming together of the village, is hilarious and sure to go down in village lore. It also shows that, like everywhere, there are issues and simmering tensions going on as would be expected of a small place where people have grown up being in each others business.

This is more of a sweet type of romance. There is sex but it’s pretty much behind closed doors and it would fit into the genre of “Small town romance.” I found the resolution of one relationship a bit rushed but that of Josh and Deborah is not and get the feeling that they are suited and will do fine. Plus I discovered that a humbug isn’t just a saying for Christmas haters! Love it when I learn something new in a book. B-