Union Army physician Evan Mackay runs his ward of the Baltimore military hospital with tremendous skill but no warmth. He will do his duty by the Confederate soldiers in his care, but sympathy and tenderness left him after the death of his brother, a Federal soldier. So why can’t he stop himself from warming to his beautiful, compassionate, unapologetically Southern nurse?

Two years of war have shown Emily Davis that the men on both sides of the war need all the comfort and care they can get. And that includes a stubborn, prickly Scottish doctor. As Evan opens his heart to Emily, she can only hope he’ll let her fill it with forgiveness…and love..

Ever since reading the first book in this series “Her Rebel Heart” last year, I had kept you and the series in the back of my mind, hoping that it would be revisited. Several secondary characters were introduced and given unfinished backstories – something that tends to gnaw at me when I’ve enjoyed a world that an author has created. I was happy to see the next installment offered at Harlequin and hoped questions would be answered as their lives were explored. 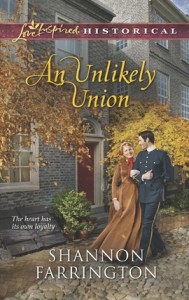 It’s two years after the first book and the horrific battle of Gettysburg has flooded the city of Baltimore with the injured soldiers from both sides of the conflict. Emily Davis and her friends have worked at the military hospital for over a year, slowly earning the trust of the medical staff for their dedication to caring for whoever needs their help and for their growing skill as nurses. Only one doctor refuses to overlook the issue that none of the women signed the Oath of Allegiance without altering it. But then they’re Baltimore rebels as far as Evan Mackay is concerned and he doesn’t care that anyone knows it.

Evan lost his younger, soldier, brother to the conflict when the townspeople rioted against the Federal troops who were in the city in 1861 and then lost his wife to childbirth after he had volunteered to join the Army Medical Corps. He views his time in the city as being in prison with rebels, resents caring for the very men who have raised arms against their country – though his dedication to his profession ensures the care is the best he can offer – and loathes Baltimore and all its Belles.

Emily feels drawn to nurse those in need regardless of their allegiance though she’s honest in refusing to sign an Oath that would require her to potentially deny aid and succor to her childhood friends who fight for the South. Dr. Mackay might be the best surgeon at the hospital but his prickly bedside manner and coldness towards Southerners holds him back, in her opinion, from delivering the best care she knows he’s capable of. But she’s going to “soldier on” – forgive the pun – in killing him with kindness just to prove she can.

So we have another excellent conflict set-up that goes beyond any little misunderstandings. Evan views this city, its citizens and Southerners as the people who took his brother from him and are probably only a hair’s breath away from rebellion against their government. He’ll treat ’em but he doesn’t have to be nice while doing it. Emily supports the US Constitution, abhors slavery but still resents the fact that Baltimore and Maryland are occupied and her people treated with suspicion.

I felt the issues were well laid out, pertinent, and compelling. But after a while, I got tired of being beaten over the head with Evan’s issues. He’d take a step forward and then a step back in resolving things. At the end of every scene, he’d still seethe with anger. At the slightest hint that his suspicions were correct, rage would continue to boil up inside him. Emily meanwhile made slow but steady forward progress. By increments she realized that she was viewing Evan unfairly, that God loves everyone even if we don’t, that her faith urged her to change in how she interacted with Evan – namely that she couldn’t just do lip service to praying for him, she needed to really mean it. I could see her gradual change while it took a “Saul on the road to Damascus” suddenness for Evan to change. I can understand and accept both speeds of change but having to watch Evan get mad, get (slightly) over it, get mad, rinse and repeat got repetitious.

The romance seemed to me to flow directly out of the change in the characters’ faith. As Emily tried to pray for Evan to be at peace, she began to see him as the man he was unencumbered by bitterness and grief. Her change in heart seemed a gradual shift over the course of the book while it took Evan a while to get beyond his viewpoint of her as a society Belle his grudging admiration for Emily’s nursing skills. Again, once he had, his change, acceptance and growing romantic feelings quickly blossomed.

I did enjoy seeing Sam and Julia again and the evidence of their happy life so far. Their inclusion here felt necessary to the main story at hand. A few other characters appeared and I hope that one couple in particular will feature in a future novel. The tension in occupied Baltimore still remains as well as the divided loyalties of this “neutral” state. I wish more of the story focused on the awful fact that the Emancipation Proclamation hadn’t freed the slaves of Maryland yet but perhaps that is for a future story. I’ll keep checking the offerings at Harlequin to find out. B-