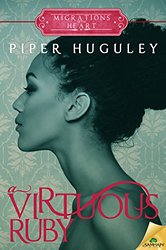 An unexpected love in a small, Southern town.

Migrations of the Heart, Book 1

After fifteen months of hiding from the shame of bearing an illegitimate child, two words drive Ruby Bledsoe to face the good citizens of Winslow, Georgia. Never again. She vows to speak out against injustice. For her sisters. For her parents. For her infant son, Solomon.

When she comes to help an injured mill worker, she bristles when a tall, handsome man claiming to be a doctor brushes her aside. Despite his arrogance, Ruby senses he’s someone like her, whose light skin doesn’t quite hide who he is.

Up north, Dr. Adam Morson easily kept his mixed race a secret. Now that he’s in Georgia, summoned by his white father, he can feel restrictions closing in around him.

Something powerful draws him to the beauty whose activist spirit is as fiery as her name. And soon, Adam wants nothing more than to take Ruby and her child far from Georgia’s toxic prejudice. But Ruby must choose between seeking her own happiness and staying to fight for the soul of her hometown.

Warning: Contains a doctor learning there’s more to healing his patients than stitching a wound, and more to a woman than knowing her place—and it’s not in the shadows with her head down. Sorry, Buckeye fans, this hero’s a Wolverine—but we won’t hold that against him.

There is mention of and a flashback to the heroine’s rape.

When I saw this offered by Samhain, I asked to review it as I’d wanted to try another of your books. Having just read the novella “A Sweet Way to Freedom” that introduces Ruby and her Uncle Arlo, I dove right in. While the novella ended on a happy note, I realized this book would be much darker in tone. The trials Ruby and Adam face put them, and me as a reader, through the wringer. I did wonder why Ruby’s Aunt Missy and Uncle Arlo’s children never even mentioned. And there’s the fate of her Uncle Arlo. It’s what can be expected for a historically correct book but still depressing – especially given the recent novella.

From the very beginning, the story addresses skin color and the differences it makes to how you act and what you can (safely) do and say. Even though Adam can pass, Ruby is still astonished to meet a black doctor. She’s slightly less astonished when she learns that in order to attend his medical school, he did pass. Ruby’s has been “punished” for her social agitation and she doesn’t want Adam to risk punishment for attempting to stay in the hotel that won’t accept blacks.

Adam has experienced life with people looking first at his medical skills instead of his skin color. But he’s grown up in TN and knows the stakes and dangers for a black man in the South. He respects Ruby for saving him from what could have been a tricky situation. The casual racism from his father is almost more afronting then the rudeness from Mrs. Winslow at him being in her house. I was curious as to why didn’t Adam get upset at what Ruby told him in regards to David attacking her?

The conflict between the main characters will be in Ruby trying for a better future for her son by stopping the lynchings and oppression vs Adam wanting her to be cautious so she won’t be hurt and leave her son motherless, agitated and prone to asthmatic attacks. But what about his feelings regarding race now that he’s back in the South and as subject to them as others? Will he step forward or play along?

The two also clash over birthing methods with Ruby taking the lead. Adam might have book learning and science but Ruby’s got experience and the wisdom taught to her by generations of midwives. I was glad to see him finally acknowledge she’s right about some things.

Winslow is a small town with all the small town issues. Ruby has been judged for what happened to her and must deal with the feelings of Church members. Ruby also has to endure talk about how she’s thrown herself at David for years and now she claims he attacked her. Typical blame the woman. That hasn’t changed either. The added horror is that she has to keep quiet to protect her younger sisters from the same thing. David’s unthinking comments to Adam about the issue are nauseating.

I had issues with the way Ruby and Adam kept changing in their thinking about each other. One minute they bristle and silently declare the other would never do because of “X, Y, or Z” then I turn a page and he’s offering to help her schooling and wondering if she could like him while she’s miffed that he isn’t talking about a future with her as his nurse and thinking she could come to like him. Then after they appear to be getting more used to and liking each other, the whole repeats again, and again.

Ruby is faced with a dilemma – marry to “cover her shame” in the community and face a lifetime of belittling and abuse from a man of God or refuse him and endure her mother’s anguish at what the townspeople think. It’s a choice made worse when Ruby learns something that devastates her. It’s easy now to decry Ruby having to be faced with that choice at all but the story is set in 1915 and times were different with different social pressures.

Even though he’s not a man who believes in God, Adam certainly testifies in Church and gives the parishioners something to think about in how they accept Ruby and Solomon and the duplicity of the Reverend Dodge. “Amen.”

As the situation with the Winslows worsens, and David all but spells out the fact that if Ruby and the baby stay, there will be trouble, I’m shaking my head at why Adam doesn’t tell her about it. Adam knows what Ruby’s been through, he saw a man die after being beaten, he knows what happened to Ruby’s Uncle. But then Ruby seems to blow off all the indignities, injuries and death that she’s seen. Now that I think of it, Adam tends to dismiss potential problems – at least to himself. He’s gone too long without having to think of race and it’s implications

Veiled threats to her and her child – after what she learns about her mother and father – that she seems determined to ignore have me incredulous. I know she’s stubborn, I know she wants to stay with family but she *knows* the lengths to which the Winslows will go to silence her. The plot is carried by this but it does make me question Ruby’s common sense. She’s brave, yes but she’s got a child who is being threatened.

I’m in love with Brother Carver and Sister Jane. They are the truly righteous with God.

The ILYs are very sudden, and I felt I was just being told it and didn’t truly feel it after too much circling around over the course of the story.

The intensity of scene after revival is chilling and heartrending. At this point, I have to admire Ruby for heading out to save Adam despite her fears and very real knowledge of what could happen to her. Ruby very intelligently plays the only card she has that would truly make a difference in the town of Winslow. I’m still pondering my feelings about David and his mother. Like Adam and Ruby, I feel sorry for her but still want to smash him to a pulp. Paul Winslow only changes due to the death of his other son and his realization that Adam is all he has left.

David’s “deathbed” confession and prayer for forgiveness is a touch melodramatic even if it does finally give Ruby the freedom to let her burden of guilt go. The wrap up parts are tying the ends of the plot threads and giving closure. It’s nice but it felt a bit of a let down after the major denouement had occurred. Since religion is such major part of the Bledsoes’ lives, it naturally follows that much of the story refers to it. Still I didn’t feel that the story was preaching at me. It’s frustrating to see Ruby and Adam coming closer and closer to being hurt because of their race and the prejudice of the era. I had to keep reminding myself that neither had the full picture of the threats and dark clouds looming over them and until the very end, little reason to confide in each other. As well, Adam had been in Michigan for years, passing, and the full impact of being black in the South still hadn’t hit home. The story is dark as befits the times and hurdles the MC face. The horrible things that have happened to several of them are all too true. Anyone delving into this world best prepare themselves. B-