REVIEW: The Hanged Man (The Tarot Sequence, #2) by K.D. Edwards 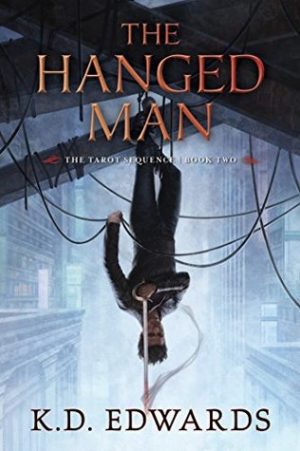 The last member of a murdered House tries to protect his ward from forced marriage to a monster while uncovering clues to his own past.
The Tarot Sequence imagines a modern-day Atlantis off the coast of Massachusetts, governed by powerful Courts based on the traditional Tarot deck.
Rune Saint John, last child of the fallen Sun Throne, is backed into a fight of high court magic and political appetites in a desperate bid to protect his ward, Max, from a forced marital alliance with the Hanged Man.

Rune’s resistance will take him to the island’s dankest corners, including a red light district made of moored ghost ships; a surreal skyscraper farm; and the floor of the ruling Convocation, where a gathering of Arcana will change Rune’s life forever.

SPOILER ABOUT RUNE’S ROMANTIC RELATIONSHIP FROM THE FIRST BOOK INSIDE. BEWARE IF YOU HAVE NOT READ IT.

I enjoyed the first book of this series, but this one definitely took my enjoyment up a notch and maintained it throughout the story. The blurb gives you the perfect description of the set up. Rune and his companion Brand are trying to protect their ward Max from the attentions of The Hanged Man. The Hanged Man wants to marry Max. Max doesn’t want that at all and who wants to be married to the monster? This is the main conflict in this book, but let us step back for a minute.

I loved how this book added so much detail to the world building. I have not reread the first book before reading this one, but I remember well that as much as I enjoyed it, at times the idea that the beings who live in the New Atlantis are based on the *Taro cards deck* seemed a little artificial and weird. I did not feel that way at all while reading book two. Starting with the introduction which reminded us about some things and if I remember correctly added others, I was able to imagine New Atlantis more clearly.

I also appreciated that while the author introduced many interesting spells and magical systems and ideas that work in New Atlantis and the residents use, the reader also always aware that magic has limits, magic takes tolls on the users, even on most powerful ones. The idea of the limits is reintroduced, but we also learn about more sophisticated magic which takes even heavier toll on the users ( I won’t tell you about this magic because spoilers, but it was very fun to read about ).

“There were always consequences with magic. Always. Did you want super-speed? Or super-strength? Fine. But in the absence of ancillary spells, you’d end up ripping muscles away from your bone with the first punch; or blister and shred your skin with the friction caused by breaking the sound barrier. So you needed spells to supplement spells. Spells to toughen your skin, fortify your bones, protect your tendons and ligaments—a spiral of cause and effect that required a lot of practice.”

Detail matters to me! To me it means that the author crafted the magic in his world carefully before sharing it with the readers. For example this sentence:

“Translocation magic and teleportation magic are fraternal twins: closely related, but not identical.”

Of course any reader or watcher of the fantasy movies/shows knows common meaning of the teleportation magic. I know too, but the fact that author decided to introduce something similar but different to add some magical flavor ( or for whatever reason, obviously I am not in the author’s head) made me very happy.

I can sing praises to the world building in this book for a long time, but of course what made the story for me was plot and characters. The story moves just as fast as the first book did, but while in the first book I occasionally thought that I needed a breather, because I at times felt as if I was in the video game, the pacing in this book for me was almost perfect. Yes there was lots and lots of action, lots of magical fights, but I did not feel as if the characters were sacrificed on the altar of action. I thought the characters drove the plot and we also got to know them more, got a deeper insight into who Rune and Brand were and I am sure we still do not know a lot about these guys.

I have to admit, as much as I like Addam and quite okay with him and Rune together, I am really not sure why they are actually together. I am only saying this because *in comparison* to the bond Rune and Brand share, Rune’s interactions with Addam pale to me . I actually think that in this book we got rather heavy foreshadowing of what Addam’s role would be eventually (it is just a speculation, not a spoiler) and I am not sure what I think about it .

If you are in doubt, this quote is about Rune and Brand, not Rune and Addam .

“It was like he was in shock. Nothing I said would matter. So I used the one tool left between us—the one that always cut both ways. I pulled our Companion bond open and let my emotion sing through it. It was not something I could do often, but when it worked, it was an emotion so complicated and layered it was nearly a soliloquy. It expressed the concept of Companion. It said brother. It said ally. It was nearly the type of connection that existed between tallas.”

This reservation notwithstanding the story had everything – Rune had to make some really hard decisions, to grow up in several ways. He had to ask for help from those he was not sure would help him and deal with the deck fate gave him. He and Brand fought for their loved ones and several secondary characters experienced character growth too. I always love “the family we choose” theme and their family is growing now and I loved it .

There were several new secondary characters. I saw several powerful women in the first book, but I did not feel like they were utilized all that much. Man, did the situation change in this one. I cannot wait to see what Anna will do in the future. And Lady Death rocked. So much.

I loved the humor in this story. The dialogue between Brand and Rune often made me if not laugh then at least giggle, but even observations that Rune makes to himself about erm the things that were happening around him were often amusing.

“I turned and saw . . . not a unicorn. Grazing at the bottom of the slope was a creature not unlike a fur-covered castle siege engine with a massive, sharp tusk jutting from its head. The tusk alone was the size of a small automobile. “What is it?” Addam breathed. “I’m fairly sure it’s a dinosaur,” I said. I decided, since it was a uniquely new sentence in the history of all my sentences, to repeat, “It’s a dinosaur.””

→ Sirius
Previous article: REVIEW: Out of Practice by Carsen Taite
Next Post: REVIEW: Will My Cat Eat My Eyeballs?: Big Questions from Tiny Mortals About Death by Caitlin Doughty