REVIEW: The Passions of Emma by Penelope Williamson 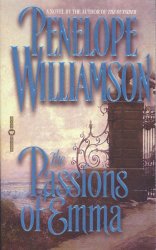 A long time ago (almost seven years!), my first review for Dear Author was of your romance Once in a Blue Moon. Today, stuck in the middle of an endless historical romance malaise, I decided to turn to another one of your books that has long been a favorite of mine, The Passions of Emma. I am not much of a re-reader these days, but when TPoE showed up on sale, I snapped it up.

The story is set in 1890 in Bristol, Rhode Island (an unusual setting in both time and place that was used quite effectively, I thought). Emma Tremayne is young, beautiful and rich. She’s also painfully shy and desperately unhappy. The expectations of her overbearing mother and the complicated dynamics of her dysfunctional family make her yearn to escape her stifled life, but she has no idea how to.

One day at a fox hunt Emma encounters an insolent groom, a scarred Irishman whose intensity and apparent disdain unnerve her. At the same event, her beau, Geoffrey Alcott, proposes to her, and Emma accepts. On the way back from the hunt, the hunters encounter a woman bearing a mangled, dead child. The woman confronts Geoffrey, the owner of the mill where the child worked and died. She excoriates him and the whole group for their heartlessness. They – the “Great Folk” of Rhode Island – are indifferent to the unsafe work conditions and the exploitation of the poverty-stricken workers, the woman charges. Emma is shaken and ashamed, but unsure of what to do or say; her ordered world is usually exempt from such ugliness, and though it affects her deeply she can only maintain the facade she has become so used to.

Shortly after, Emma encounters the woman from the mill again on the streets of Bristol, terribly ill. Impulsively, she takes her home and soon learns that the woman, Bria McKenna, is the wife of the scarred Irish groom, Seamus. A visit from Emma to the mill where Bria works, the mill where the poor mangled child died, opens the door to a friendship between the two women. Seamus is wary and suspicious of Emma at first; their relationship is awkward as well because Emma is attracted to him. In fact, she soon realizes she’s in love with Shay, a circumstance that is painful not just because he loves Bria, but because Emma quickly comes to love Bria, as well.

Bria McKenna is dying. She is heavily pregnant when she and Emma first meet, and in the end stages of tuberculosis. The circumstances of Shay and Bria’s lives are already pretty tragic – they fled tragedy and loss in Ireland, they are barely subsisting with their two daughters, and now Bria is going to die. While The Passions of Emma is definitely a sort of romance – a romance between Shay and Emma – it’s also a story about the love between Shay and Bria, and between Emma and Bria. In that sense it’s very unique – a love triangle (sort of) where none of the three are lesser or less loved or the bad guy in any way. The romance between Emma and Shay doesn’t really start properly until the last quarter of the book, but a lot of intensity is packed in a few pages.

Emma is a creature of contradictions – shy and reserved, but in her own way, a rebel. Her mother muses about how Emma is her cross to bear, and about how she had tried to break Emma of her willfulness:

“She’d locked the girl up in the cellar with the rats and spiders; once she’d even had her tied down to the bed so she could beat her back with a cane. Yet none of those punishments had done any good. In many ways Emma had always been as malleable and obedient a daughter as she ought to be. But in other ways she was every bit a Tremayne. There was a wildness in her, something untameable that frightened Bethel.”

One of the chief strengths of The Passions of Emma is the depth of characterization in the secondary characters. Emma’s mother is a villain – self-centered, vain and occasionally vicious. But she’s a pitiable villain, as we see that her actions are rooted deeply in fear and self-loathing. Emma’s father is almost by default the “good” parent, the one beloved by his children, but after a family tragedy he checked out and ran away to sail the world on his yacht. Emma’s sister Maddy is confined to a wheelchair after a tragic sledding accident, and has become a recluse (partly because her mother is ashamed of her and discourages her from participating in society). Maddy loves Emma, but she’s also jealous of her, and bitter and angry; she longs for Geoffrey Alcott’s self-destructive, alcoholic brother Stuart.

If there were one thing I would criticize upon this re-read, it would be a lack of subtlety in the writing. The differences between the gilded world of the Tremaynes and the lives of the poor Irish factory workers are made clear, and then hammered in with a mallet. And then the various characters talk about them, not quite ad nauseaum but certainly more than was necessary to get the point. It could have been taken down several notches, I think. But Williamson’s books tend toward the melodramatic and at one time that was one of the things I loved about them (I have a weakness for well-done melodrama).

Even as my tastes have changed in some ways, The Passions of Emma retains the power that a number of this author’s books have over me – I spent the last quarter of the book on the verge of tears, moved by travails Emma and Shay face on their way to their HEA. My grade is an A-.