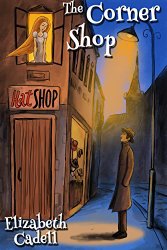 Lucille Abbey runs her London secretarial agency with utmost efficiency. When, therefore, a certain Professor Hallam rejects three girls sent by her to apply for the post of his secretary and they each pronounce him “impossible”, Lucille herself sets out to interview the Professor at his home in Hampshire. He is, she finds, eccentric—even impossible; but he represents a challenge and, what is more, an excuse to delay what promises to be a trying holiday in Paris.

She stays on to tame and to organize him—a less formidable task than she had imagined; in fact, she grows fond of him. But the atmosphere is somewhat disturbed first by the arrival of a debonair French art expert in search of paintings left to the Professor by his mother, and the next by a hysterical girl on the track of her runaway fiancé. The paintings have unaccountably disappeared; the mystery is still unsolved by the time Lucille’s work for the Professor comes to an end and she has to set off for Paris. At her aunt’s shop in the Rue des Dames, the arrival there of the indomitable art expert, the hysterical girl, the Professor, and a persistent suitor to boot, throw Lucille’s normally orderly life into complete upheaval.

When I began reviewing some D.E. Stevenson books, several readers suggested I try Elizabeth Cadell next. Nearly five years later, I finally followed their advice. This book seemed to be a favorite so with no other compass to point me, I picked it.

Oh my, what a delightful book. The descriptions take me straight to the world this book arose from. Originally published in 1966, it’s right on the edge of the staid early 60s before that decade turned. Women still wore hats and gloves, the heroine is (rightly) proud of turning her life around with her small secretarial business, transportation outside of London was hit or miss, not everyone had phones in their homes (and a phone call all the way from Paris is a Big Deal)and there was a certain degree of formality expected of people and situations. Later on, Paris had areas the tourists hadn’t got to, people still went to church, Lucille’s aunt lived and worked on a small street with shops whose owners lived above them and which had been in the family for generations. And yet, Lucille was – gasp – divorced.

The descriptions of the characters enable me to see them exactly. Preoccupied Professor Hallam, infuriated but controlled Lucille, the suave but increasingly impatient French art dealer, the weepy, clinging and overset former fiancée, the brash Englishwoman who is fearless with French waiters and drives like a maniac (relax, there’s six yards of engine between you and them), the dainty Frenchwoman who makes bespoke hats (hats that could, that would, only be worn by true Parisiennes: frothy, fantastic, challengingly feminine), Lucille’s hard-eyed aunt behind her fluttering façade and of course Lucille’s almost-but-not-quite fiancé better at home on a horse at the hunt or behind a brace of pheasants and whose public dignity is so very important to him.

Watching Lucille beard the hill top home of the “impossible” professor (her first impression of him? Merely repulsive yet she has to give him his due when she realizes she also didn’t show to good advance the first time.) then take on reforming him and the motley band of young local children – and one horse – is efficiency at its best. With the proper effort, this unhousebroken man might be set straight. Lucille is an expert at living with the “Greatest living authorities” having grown up the neglected daughter of one. She knows how the professor will act and how to manage him. Staying on to deal with his business also gives her the chance to put off making a decision about her possible marriage – talk herself into it more like. Still Lucille relishes a challenge.

When Lucille begins to whip Hallam into shape, he gets a touch annoyed – especially with her grocery bill as she’s a woman who likes to eat well – but it’s when she inadvertently reveals to him that she (painfully) knows about absent minded professor types that he begins to show some interest. Their steely tit for tat conversations are genteel but no holds barred for all that. Hallam also shows some teeth as he explains his disdain for the so-called social conventions that in his opinion waste time and would fill his life with idiots. Still when she quickly realizes that she doesn’t truly want to leave Hill House and go to Paris and deal with her almost fiancé Malcolm, it is a bit fast for a woman who loves her London amenities. Ah, but the plot is just about to take its next turn and move to Paris where things get truly interesting. Pay attention to all the little details along the way because before the book is done, they’ll come neatly into play. I can’t and won’t begin to try and describe the twists and turns, the ins and outs, the gathering up of all the intricate plot threads and how Cadell keeps it all untangled. The descriptions of Paris are wonderful and Lucille, unlike her aunt who lives and works there, has made herself friends of the shop owners and at home in this world.

In solving the many mysteries which all tie back into one, Lucille learns some things. That one man might be caustic but could also be kind; he sees far more about people and is willing to believe better of them and try to work out solutions while other men don’t transplant out of their milieu. Yes, Lucille and Hallam are soon back to their usual acerbic (sarcastically hilarious) exchanges.

“Good morning,” she said. “I hope you slept well.”
“My feet stuck out at the end of the bed and got rather cold. You must have rather a head this morning, after your last night’s orgy.”
“Did you make coffee for one, or coffee for two?”
“Coffee for one. I looked into your room; you were full fathoms five.”
“How can you sit there with all this mess round you?” she asked. The room made her shudder.
“You can’t expect me to clear up after a party I didn’t attend, can you?” the Professor asked.
“I never expect you to do anything—except for yourself.”
“You mean I should have made coffee for you, and left it to get cold?”
“Some men would have brought me in a tray with a teapot, milk and sugar, slices of lemon, toast, little curls of butter and a tiny pot of honey.”
“And a pale pink rose in a glass; don’t forget that. I thought you’d rather be left to sleep it off. It was interesting, when I arrived, to see you with your usual cool head heated by wine.”

Then there’s the superb conversation at a French restaurant between the said brash Englishwoman whose driving scares Parisians and the weepy former fiancee as they watch and listen to Hallam and Lucille finally work out the details of the plot. Sorry, too long to quote. It must be read in situ for full enjoyment.

I did wonder at Lucille’s belief that Hallam hadn’t shown his feelings yet. He gives one lovely speech which shows how much he’s “seen” her and knows her, truly how much she means to him. My guess is that Lucille just wants to not only be sure but to, as she shows, get him to reveal that he knows what the verb “to love” means and is willing to say it. Her last line just goes to show that Hallam has got a lifetime of her expert “care” ahead of him. A-

→ Jayne
Previous article: DAILY DEALS: Popular titles and old faves
Next Post: REVIEW: Back to You by Chris Scully