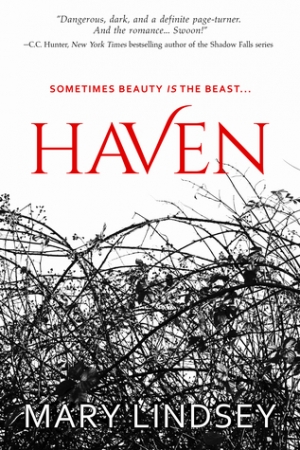 “We all hold a beast inside. The only difference is what form it takes when freed.”

Rain Ryland has never belonged anywhere, He’s used to people judging him for his rough background, his intimidating size, and now, his orphan status. He’s always been on the outside, looking in, and he’s fine with that. Until he moves to New Wurzburg and meets Friederike Burkhart.

Freddie isn’t like normal teen girls, though. And someone wants her dead for it. Freddie warns he’d better stay far away if he wants to stay alive, but Rain’s never been good at running from trouble. For the first time, Rain has something worth fighting for, worth living for. Worth dying for.

One of my friends was tweeting about picking this one up at NetGalley and I was intrigued enough to go take a look myself. The blurb doesn’t really say much but Goodreads told me it was PNR/UF and I decided to give it a whirl. Great decision past me!

For those DA readers who, like me, don’t read much YA but are dyed-in-the-wool romance readers, I can confirm that Haven is very romantic, complete with HEA. Both main characters read older than their years (just about to turn 18), so far as their level of maturity goes, for reasons which made sense to me so I didn’t balk at their relationship at all or at their commitment to one another.

Haven is intelligently written and sets a cracking pace. As a hero-centric reader, I was delighted to find it is told entirely from the (third person) perspective of Rain. Rain has lived on the streets or in shelters for his whole life. His mother moved them around a lot and he’s very used to fending for himself. He’s a big guy and is a protector by nature. The first scene has him beating up a gang member who was trying to kidnap and do awful things to a teen girl.

Rain has never really had the opportunity to settle into a community or a home and have close friends. When his mother dies suddenly, he is sent to New Wurzburg in the Texas Hill Country to live with his heretofore unknown Aunt Ruby. Much to his surprise, he finds a warm welcome from her and he starts to think he might have found his place in the world.

The first third of the story is quite dark and spooky, as  it becomes obvious that New Wurzburg is hiding many secrets. Because the blurb gave so little away, I wasn’t really sure what to expect and I must say, going in with so little knowledge of the story only enhanced the feeling of danger and tension. There was a Holly Black kind of vibe to the book – somewhat reminiscent of The Darkest Part of the Forest, even though the stories are very different.

The writing is smart and the characters had believable dialogue which fit their ages.

Grant punched his shoulder in that conspiratorial, macho guy kind of way.

Rain wanted to punch him back in a knock-his-teeth-out kind of way.

The story kept that balance between showing me the maturity of the main characters and never letting me forget they’re actually quite young.

Whoa. Mrs. Ericksen was Chief Richter’s sister. On closer look, Rain could see the resemblance. Their mom must have given them look-regal-while-being-creepy-as-shit lessons.

When Rain starts school, he meets Friederike “Freddie” Burkhart and feels instantly drawn to her. There is a titch of the ‘fated mate’ trope to them in some respects but I thought it was a clever take on things. Freddie believes her father was murdered and is intent on revealing the cover-up and discovering who did it. Rain’s protective instincts are aroused and he finds himself offering to help. Freddie isn’t what she seems – just like the entire town (or almost all of it anyway) and warns Rain away but he doesn’t listen. He senses Freddie is in danger and he can’t just stand by and do nothing.

Like yesterday on the track, a warm buzz traveled up his arm and a strange appreciation for the guy washed through him. Not right. Nothing about this was right. This whole town was off somehow, and he planned to get to the bottom of it, starting with the mystery of Freddie’s dad’s murder and who might be out to harm Freddie.

Rain is a good guy. He’s had a difficult life but he has a nobility about him and a desire to protect those who are more vulnerable than he which shines through in most of what he does. He’s content to stand at Freddie’s side or even a step or two behind and to the right and let her take the lead. He doesn’t feel a need to be in charge. But he is driven by a powerful urge to care and protect. He’s my favourite kind of hero actually. In places he was perhaps a little too perfect, a little too self-sacrificing but I gave him a pass.

About a third of the way in, New Wurzburg begins to give up some of it’s secrets but it is such an engrossing read I don’t want to give away too much more about Watchers and Weavers and their mythology. It’s best discovered by reading the book.

The world building is solid and detailed. While Haven is a stand alone, you could make a series of it. I’d happily read more about Petra for example. She was a fascinating character. I also loved how Rain’s inherent kindness shone through not just when he was romantically inclined. He is something of a catalyst in many ways; shaking things up, inciting change.

The risk rises as Rain and Freddie get closer to finding out the truth and as her 18th birthday approaches. There are some fairly dark and graphic sections (no sexual violence) which edge the book toward horror in places. Freddie and Rain go through so much it was kind of weird to end the book and realise they still go to high school.

The heat level is mild but entirely appropriate to the story and I didn’t feel the least bit short-changed. It is clear that Rain and Freddie have an intimate and meaningful connection.

I also liked how you showed Rain making connections with others, in particular Aunt Ruby and I really liked how you highlighted that things both of them had believed about his parents were more nuanced than previously appreciated.

Haven took me by surprise, it was clever, exciting and so different to what I’ve read before. I loved it.

She hugged her backpack to her chest. “I’m trying to save your life.”

“I’m trying to make my life mean something.”

→ Kaetrin
Previous article: REVIEW: The Wind Off the Small Isles and The Lost One by Mary Stewart
Next Post: REVIEW: Ambulance Girl by Jane Stern