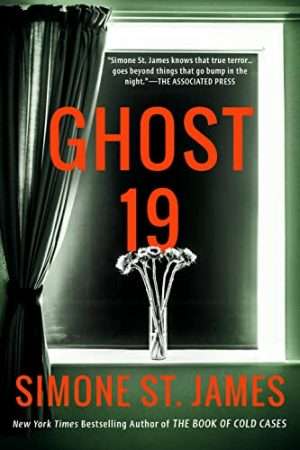 A woman moves to a town where she becomes obsessed with watching the lives of her neighbors while stuck in a house that refuses to let her leave in this first ever short story from the New York Times bestselling author of The Book of Cold Cases.

Is there something wrong with Ginette Cox? It’s what everyone seems to think. When a doctor suggests that what she might need is less excitement, she packs up and moves from New York City to a house in suburban NY: 19 Howard Ave.

The town offers Ginette little in the way of entertainment in 1959, but at least she has interesting neighbors. Whether it’s the little girl with her doll or the couple and their mother-in-law, Ginette watches them from her window and makes up names and stories for them.

But it’s not all peaceful in suburbia. Ginette finds it hard to sleep in her new house. There are strange and scary noises coming from the basement, and she is trapped, either by a ghost or her own madness.

But when Ginette starts to think a murder has taken place and a mysterious man starts making terrifying appearances outside her window, it’s clear she must deal with whatever isn’t allowing her to escape this house…

Oh my God, oh my God, oh my God that was so good! Part “Rear Window,” part horror, and part romance. The slow building tension, the explanations that might explain away what Ginette is seeing or feeling – or thinking she is seeing or feeling, the deft details that set this in the late 1950s when women didn’t live alone – or they didn’t unless they were that sort of woman, a mother’s frustration that her daughter did live alone and was an (gasp) actress. The doctors who didn’t mind sharing medical details with the police, or who did house calls for $5 and left unlabeled bottles of god-knows-what pills. And a woman, an actress sent away from NYC by her doctors there to a calm place who was to have no excitement who finds herself trapped in a house that no one ever rents for long, by something that won’t let her go.

This one does take its time getting started – and doesn’t hesitate to make Gin a bit unlikeable and give her some affectations – but then I was literally holding my breath and my fingers were flying as I raced through the last part of the story. What had happened?! Who was wailing from the basement? What did sweetheart Andrew see when he scoped out the house across the lane that he and Ginette were watching? Where did Mother-in-Law go? Who was the man in black who stood in front of Ginette’s window? Was Detective Ian Challis married or not? And how was Ginette going to finally get away. That is if she got away.

Write faster Ms. St. Simone. Write so much faster because I want another story as good as this one, right now. A-