Janine: Megan Whalen Turner completed her Queen’s Thief series two years ago, and the essays, stories and vignettes in Moira’s Pen, a new collection of set in the same world and featuring some of the same characters, are a bit like the big crumbs and smears of ganache left on your plate when you’ve finished an amazing slice of chocolate cake. The cake was so good that even the crumbs are tantalizing and you can’t let them go uneaten. 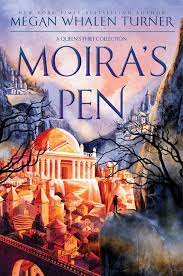 This is my perspective as a huge fan of the series. With that said, the book feels padded and it is short to begin with, just 180 pages if you don’t count the glossary (I don’t).

Jennie: The book did feel surprisingly slight to me.

Janine: I expected some slightness but I do wish there was more.

Of the works of fiction, I recognized a number of reprints. Here is a rundown of those. “Eddis Goes Camping,” “Knife Dance” and “Alyta’s Missing Earrings” are bonus short stories from previous print editions. “Breia’s Earrings” could be considered either a short story or a vignette and appeared in a publication many years ago. “The Destruction of Hamiathes’s Gift,” and “Wineshop,” are paperback edition bonuses that I would characterize as vignettes. “A Trip to Mycenae” is a travelogue that and a rather boring one for me (it was also an extra in one of the paperbacks). “Envoy” is the last chapter / epilogue in Thick as Thieves and “The River Knows,” a poem, was part of Thick as Thieves as well.

(The poem makes its appearance during a private conversation in palace gardens of Attolia, when Irene asked Kamet to recite it to. Its themes run along Ecclesiastes 3’s (“To every thing there is a season, and a time to every purpose under the heaven / A time to be born, and a time to die; a time to plant, and a time to pluck up that which is planted […]). Turner’s version is just as lovely IMO and it broke my heart all over again, because that scene in Thick as Thieves takes place after Irene’s miscarriage and the poem is written as a dialogue between mother and child. Rereading it moved me so much that I opened my copy of Thick as Thieves and reread these lines: “The queen looked down at her hands, stroking the soft velvet of a cushion, and said, ‘It was not her time. We will welcome her when she comes again. […]’”)

Of the reprints my favorite is probably “Alyta’s Missing Earring” and after that “Eddis Goes Camping” and “The River Knows.” “Alyta’s Missing Earring” is the first is a magical half timeless myth, half-story that takes place in Gen’s time, and a meditation on the nature of fate. The ending circles back in a resonant and romantic way. I loved this one the first time I read it too.

Jennie: I love “Alyta’s Missing Earring” precisely because of the resonant and circular nature of the story and characters.

Janine: I also thought it was delightful that there four pieces about earrings—it was fitting since they were Gen’s favorite item to steal.

I’ve read “Eddis Goes Camping” more than once in the past. We see Helen’s first encounter with the gods as a child of nine. I’ve always loved stories where a child forgets something magical and important that they once knew and the memory is lost to them for a long time or even forever.

I am glad to have the reprints collected in one place with nice illustrations but I was disappointed that there wasn’t more new material. Did you feel that way too?

Jennie: A bit, yes. The illustrations were nice, and it’s not like I was expecting substantial new material, necessarily. But these pieces mostly had an ephemeral quality that went beyond their short length and the fact that they are mostly reprints. I guess I would have liked a story that was “behind the scenes”, or something like that – a new look at a part of the saga seen from a different perspective, perhaps.

Janine: Among the new (I think) stuff are nine short (often less than a page long) essays about ancient objects that inspired things in the novels. The one I liked best is “The Royal Game of Ur” which is about an ancient Mesopotamian game and how its rules were deciphered through translation of a clay tablet. It caught my attention enough that I looked it up online and discovered that it bears some similarities to backgammon, was played as early as the beginning of the third millennium BC, and that the man who translated the tablet later discovered that it was played in the Jewish community of India up until the 1950s. All that was fascinating but most of it was on Wikipedia and in The Hindu, not in the book.

Jennie: That piece compelled me to do a little research too!

Janine: It was fascinating. Some of the other essays were interesting as well but as with the reprints, I was disappointed that they weren’t new works of fiction about the characters I love, which is what I come to Megan Whalen Turner’s books for.

Jennie: I think everything being *so short* affected my enjoyment – just as I was getting into a piece, even in the case of the essays, it was over.

Janine: Good point. Here’s what was new to me:

“In the Queen’s Prison” is a poem (it includes Gen’s desperate invocation of the great goddess for help, which has made notable–and powerful–appearances in The Queen of Attolia and The King of Attolia). “The Game of Kings,” “Music to Delight the Ear, and “Melheret’s Earrings,” might be vignettes or deleted scenes, it’s hard to say. “The Princess and the Pastry Chef,” “Burning Down the House of Kallicertes,” “The Watch Takes the Thief,” “The Cook and the King of Attolia,” “The Arrival,” and “News from the Palace” are all vignettes IMO. “Eddis’s Earrings” and “Ina and Eurydice Borrow a Beehive” are excerpts from scenes in a play, the first only four lines long and the second perhaps a page. “Immakuk and Ennikar at the Gates of Heaven” is Gilgamesh-style epic poem in a similar vein to the ones in Thick as Thieves (Kamet references its storyline in Thick as Thieves but does not recite it) and “Brinna’s Almond Cakes” is a recipe.

Jennie: As for the poems, “In the Queen’s Prison” confused me a bit (it has an odd structure) and “Immakuk and Ennikar at the Gates of Heaven”, I hate to say, kind of bored me. But I don’t really have the patience for epic poems; that’s part of the reason I’ve never tackled The Iliad.

Janine: I have the same patience issue, LOL. I was not a fan of either, but especially “In the Queen’s Prison.” It didn’t live up to the power of the scenes it alluded to.

And re. brevity, how did you feel about the tiny little dialogue only excerpts? The absence of description there really bothered me.

Jennie: Again, the word that comes to me is “ephemeral” – they felt like bits and pieces, fleeting and insubstantial. I guess that was the intent.

Maybe this relates to why I don’t consider myself much of a short story reader – I like to sink into a story. That was really impossible here – blink and the story was over. It made for an easy read but not one that will stay with me, I don’t think.

Janine: It can be argued that there is not a single bona fide short story among the new material. It’s hard to know how to classify the penultimate piece, “The End of Eddis.” Is a short story when there is no real plot involving a beginning, middle and end, and when it doesn’t stand on its own? Is it a vignette, since it packs a bigger punch than vignettes almost ever do? In my view it reads like an epilogue to the series, and “Gitta,” the last work of fiction here, reads like the prologue to a much longer new work.

Jennie: “The End of Eddis” was poignant, but I don’t think someone who hadn’t read the series would get much out of it (though it’s fair to say that this collection is definitely not for those who haven’t read the series).

Janine: Agreed. I recommend that readers who haven’t read the earlier books yet start with The Thief or (if you’re looking for something more adult) The Queen of Attolia.

The material in the book is organized in chronological order, beginning when Gen is four (he doesn’t appear in that story) and ending most likely generations after his death. I read parts of “Gitta” twice. There’s a lot of new information to glean from it, some spelled out and much only alluded to. It took rereading it and discussing it with other readers as well as pondering “The End of Eddis,” for me to construct an almost complete theory for what events might have taken place on the Little Peninsula after the ending of Return of the Thief as well one for what is going on under the surface in the palace in (I think) Brael, where Gitta, a thirteen-year-old descendant of Gen and Irene’s, lives.

If the theory I arrived at is correct, then “Gitta” is a far more complete story than it seems at first, but it still leaves the door wide open for more books set on the Little Peninsula and I really hope we get them. A lot of loose ends are dangled for the reader to theorize or wait for more about, only it’s not clear if the author plans to write more about the characters she introduces here.

“Gitta” also left me a bit in turmoil.

If you’re a stickler for happy endings and really want to imagine a long, peaceful, and happy life for Gen and Irene, you might want to skip it. Then again, some other readers didn’t agree with that interpretation.

Jennie: It felt bittersweet, but I think the fact that they were long dead and that Gitta herself felt removed from them, lessened the sting of it a bit.

Janine: These things aside, I loved the complexity of “Gitta” and all the little Easter eggs in it (for example we learn the Magus’s name at last!). “The End of Eddis” and “Gitta” are my favorites among the new material. The first is powerful and poignant and the second moves the story of forward considerably, which is not something I was expecting at this point. There’s something undeniably satisfying about that even with all that is left unresolved.

(DA readers, I’d love to hear your theories on “The End of Eddis” and “Gitta” in the comments. Put a spoiler warning in all caps above your thoughts.)

I’m curious, Jennie, did you have any favorites besides “Alyta’s Missing Earring” and (I think) “The End of Eddis”?

Janine: My final thought for readers is that if you have read the series and enjoyed it but aren’t a major fan, you might want to wait for the book to go on sale. Major-fan and series completist me gives it a B.

Jennie: I gave it a B as well. I am a big fan of the series but don’t have nearly Janine’s capacity to remember characters and events from all of the books, which I think makes a difference in appreciating how intricately Turner plots these stories.