Witchmark is an m/m fantasy romance or romantic fantasy (take your pick; I think it belongs in both genres) set in an Edwardian postwar fantasy setting, in a country named Aeland. Recently, Aeland has been at war with Laneer, and our hero, who goes by Miles Singer, is a veteran of the war and a doctor now working at a hospital where other veterans are being treated for a PTSD-like illness. Miles suspects the illness may have a sinister and magical cause, and those who suffer from it eventually go on to kill their loved ones. 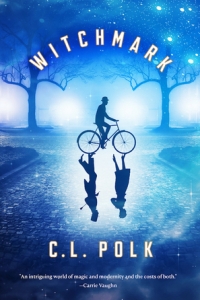 Miles comes from a wealthy, powerful family with storm mages, the most important mages in Aeland. Miles himself has healing magic which means he’s expected to become subordinate to his sister in a partnership.

Miles doesn’t want this and has changed his name/identity to escape this fate. And among most of society, someone like him would be viewed as a “witch” and persecuted if the truth were to come out. But when a dying man arrives at his hospital claiming to have been poisoned, along with Tristan, a mysterious, handsome and magic-capable stranger, will Miles put his safety on the line to discover the murderer’s identity?

My opinion of Witchmark depends on how it’s classified, whether as a fantasy romance or a romantic fantasy. For a fantasy romance, the worldbuilding is quite good—I especially liked touches like streetlamps powered by magic and the riding of bicycles. The world is certainly vividly rendered, but not as intricate and expanded as what one finds in fantasy novels, so for a fantasy novel, I’d say it’s just average.

My biggest issue, though, was the frequency with which Miles put himself in danger of discovery. It was hard to believe, given how much exposure he had, that he had been able to acquire his medical training without being recognized. His risk-taking also made him seem foolhardy at times.

Tristan was a more appealing character, though maybe a little too perfect. His powers were such that he had the capacity to abuse them quite easily, but he never did.

The romance was sweet and touching, and I also ended up enjoying a subplot involving Miles’s sister, Grace, which kept me guessing until the end as to whether Grace would come down on the side of good or of evil. I was able to put the book down easily, though, especially during the first half. B-.

Devil in Winter by Lisa Kleypas

West Ravenel is, for me, the most engaging Kleypas hero in quite some time, and ever since I read this excerpt, I’ve been salivating for his book. Since he’s going to be paired with the daughter of Evie and Sebastian from Devil in Winter, I decided to reread Devil in Winter before Devil’s Daughter comes out. 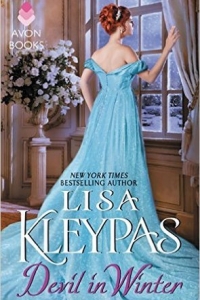 For those few in romancelandia who have not read the book, Devil in Winter begins when Evie Jenner approaches Sebastian, Lord St. Vincent, a disreputable rake, about eloping with her to Scotland. After making their arduous trip to Gretna Green, Sebastian and Evie marry, despite the fact that he once tried to kidnap and threatened to rape her close friend.

Sebastian is soon obsessed with his wife, and he even takes over her dying father’s gaming club and learns how to work for a living. Not only that, he turns out to have a knack for running a business. But when Evie refuses to admit him to her bed out of fear of losing her heart to a man who is incapable of monogamy, and Sebastian vows to prove that he can be faithful by abstaining for two months, which of them will win out?

I had remembered Devil in Winter as being among Kleypas’s best books, and the beginning was charming, with Evie parrying Sebastian’s ironic repartee, but by 60% in, my interest petered out. Sebastian’s transformation from unrepentant and morally ambiguous rake to a man whose life revolves around loving and protecting Evie was too big and happened too quickly for me to buy. It is also hard to understand what it is about Evie that makes her the one woman who is able to get him to commit.

The other wallflowers (inducing Daisy, Lillian’s sister) instantaneously forgave Evie for choosing to marry a man who had kidnapped and nearly raped Lillian. I didn’t find this believable either. If someone had done all that to my sister or close friend, and then another friend married him… well, suffice to say that I thought Evie should have gotten more side-eye for that.

Daisy’s kiss with Cam, an employee at the gaming hell, was sexy but knowing that they each end up partnered with different people in future books lowered the stakes. I also felt that Sebastian turned the failing club around awfully fast, and the villain was over the top.

Still and all, I remember adoring the book the first time I read it, and that may be because it hinges on two powerful fantasies – that of the ordinary, even stammering girl capturing the heart of the gorgeous, indifferent rake, as well as the fantasy (more common to Kleypas’s novels) of being initiated into the wonders of sex. For this reason, I’m reluctant to grade the book. If either of those premises sounds like at all your cup of tea, you should definitely give it a chance, given the book’s popularity.

I recently finished Star Dust, the first book in the Fly Me to the Moon series by Emma Barry and Genevieve Turner. It’s set in 1962 (not sure if that counts as historical or contemporary!) and is the story of a somewhat famous astronaut and the divorcée next door. 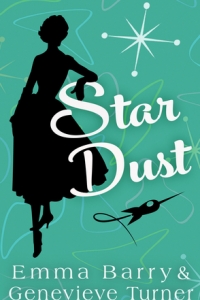 The novel is billed as a book in which the heroine is looking for a new normal and the hero is anything but, which is true, but what I thought was more interesting about the book was the way Anne-Marie had to navigate her post-divorce life in the 1960s, with other women disapproving of her choices and men thinking that because she was divorced, she must be fair game.

All of this makes Anne-Marie prickly, and it also makes her independence all the more important to her. And since she left her husband over cheating, the partying of her astronaut neighbor doesn’t sit well with her.

Kit isn’t (to me anyway) as interesting as Anne-Marie, but his gradual evolution from a bachelor who occasionally likes to party to a man who gets over his fear of the way kids look up to him for his job, to something of a father-figure to Anne-Marie’s two kids was nice too.

After Anne-Marie rebuffs an initial shallow pass from Kit, both of them try to ignore their attraction, but it blooms nonetheless, and when Anne-Marie is drawn into the neighborhood’s astronauts’ wives circle, they see more of each other than ever. Gradually they begin to like and respect each other.

Star Dust is a touching romance, though the sex scenes were ones I could take or leave (once or twice things were described vaguely enough that I wasn’t sure what act I was reading about, but most of the time they were more explicit than that).

Most of all, I liked the attention to time, place and milieu. It’s a slightly alternate timeline, with NASA replaced by an organization called ASD and the astronauts (obviously) fictional characters, but the social attitudes, speech patterns and descriptions like those of a gold bathroom and a turquoise refrigerator were all very 1960s. I also loved the details about the space program and about Anne-Marie’s job at a travel agency.

Kit gives up flying any further missions at the end of the book, probably to allay Anne-Marie’s—and the readers’—fears for his safety, but I didn’t really buy that he would. There was nothing in the text leading up to his decision to support that choice.

All in all, a nice romance and a B+ for me, thanks to all the period detail.

→ Janine
Previous article: REVIEW: When You Read This by Mary Adkins
Next Post: REVIEW: Every Other Weekend by TA Moore