REVIEW: Waking Up with the Duke by Lorraine Heath

Note to readers: This review contains SPOILERS. If you would like to read this book and prefer to remain spoiler-free, it may be best not to read this review.

I got this book from the library after a good friend of mine mentioned that it was one of her favorite books of the year. Waking Up with the Duke makes use of the conceiving an heir trope which has sometimes resulted in books I’ve loved and other times in books I didn’t care for. I was hoping that this book would be one of the former, but instead, it seems to be one of the latter, and on p.317 (of 375 pages) I have decided that reading further will only make me more frustrated. More on the reasons why in a moment, but first, a brief plot summary. 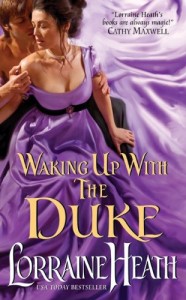 Waking Up with the Duke begins with Ransom Seymour, Duke of Ainsley (referred to throughout the book as “Ainsley”) drinking with his cousin the Marquess of Walfort. Three years ago a carriage accident that occurred while a drunken Ainsley was holding the reins resulted in Walfort’s being paralyzed from the waist down. The emotional trauma led Walfort’s marchioness, Lady Jayne Seymour, to lose the child she was carrying.

Now Walfort wants Ainsley to atone for his actions by giving Jayne a child and Walfort an heir. Ainsley is stunned and horrified. Although he sleeps around quite a bit, he considers married women off limits. Not only that, he can’t imagine allowing someone else to claim and keep his child. What he can’t deny, however, are his feelings for Jayne, whom Ainsley has loved from afar since the day he met her at Walfort’s betrothal dinner. Unfortunately for Ainsley, Jayne blames him for all she and Walfort suffered as a result of the accident, and thinks very little of him.

When Walfort tells Jayne that he wants her to conceive a baby with Ainsley, she is sickened and hurt. But eventually, for reasons having to do with wanting a child and wanting to give Walfort his heart’s desire, Jayne agrees to Walfort’s suggestion. Of course, there’s an attraction between Ainsley and Jayne, and once they go to Ainsley’s retreat in order to get down to business, romantic feelings develop. Both know that these feelings can’t lead to happiness, and yet, they cannot repress them.

A number of things bothered me while reading Waking Up with the Duke. I’ll begin with Walfort’s behavior in the first hundred or so pages of the book, which felt inconsistent to me. On the one hand he kept talking as if Jayne’s happiness was the most important thing to him, but on the other hand he was not at all possessive of her nor romantic toward her. He seemed at first to be all over the place and it was very hard to get a fix on his character. I would have liked more clues as to his motives.

Later in the book, when his secret was revealed, his motives made more sense, but even then I wasn’t certain how much his request that Ainsely and Jayne conceive a child was driven by selflessness and how much by selfishness. He kept saying that Jayne should not be deprived of children, but the later revelations made his motives more questionable and I was uncertain as to whether my interpretation of his character was that which you intended to convey.

In the beginning, that was true for me of Ainsley as well. Ainsley fit the “fake rake” archetype in that he was said to constantly sleep with women and never spend more than a few nights with each one, but his actual behavior didn’t match these actions. He did not seem casual about his relationships, and was affectionate and sweet a good portion of the time.

I was further confused by his behavior with Jayne in the first eighty or so pages. Perhaps it was simply that the romance was rushed, but Ainsley kept thinking about how he could never be a party to adultery yet at the same time he flirted with Jayne and kissed her after learning that Walfort had not done so since the accident that crippled him.

I think I was meant to believe that Ainsley was sweet, selfless, generous and honorable, but it took a long time for the book to convince me of that because Ainsley kept finding ways to spend time with Jayne while protesting that she was a married woman and therefore off-limits.

For a duke, Ainsley also seemed too humble, and other characters did not behave as if he were a duke either. Jayne thought that his hunting retreat was a one room cottage, and was surprised to discover that it was larger. Ainsley’s mother kept wanting Ainsley to marry and have children but her concern seemed to be almost entirely with his personal happiness and not with the succession of the title. There are times when I feel that a character is a duke merely so that the word “duke” can be on the cover and sell books, and that was the case here. Ainsley’s dukedom didn’t figure in the plot very much, at least in the 317 pages that I read.

Other aspects of his character were inconsistent as well. Ainsley was said to be very discreet, yet to conceive Walfort’s heir, he invited Jayne to his hunting retreat for an entire month. Although Jayne doesn’t use the Walfort title or the Seymour name, Ainsely presents her as “Lady Jayne” which seemed risky to me, revealing both her first name and the fact that she is a lady to his dozen or so servants. Ainsely also takes Jayne also visit a local fair and they regularly go walking in the village, patronizing merchants along the way. In England of 1860, this doesn’t seem discreet to me.

At Ainsley’s hunting retreat, some things happened that bothered me. First, despite Jayne’s wishes to the contrary, Ainsley was determined to bring her pleasure, and he brought her to climax their initial sexual encounter. On the one hand, Jayne’s resulting emotional distress made the scene powerful, but on the other, I had a difficult time reconciling this with Ainsley’s supposed love and selflessness. Physically Jayne may have felt pleasure, but emotionally it made her betrayal of her marriage vows more complete. Had Ainsley been portrayed as morally ambiguous I would have had no problem with his violation of her boundaries, but since he was supposed to be such a good guy, it didn’t entirely fit with the rest of his portrayal.

The pacing of the book felt off to me, with much of it rushed or underdeveloped. For example it took Jayne less than two days alone with Ainsley to change her mind about him completely. Where before she had thought he was hateful, she now saw so much goodness in him. I thought it would have been more believable had it taken her longer to come around.

I also noticed an occasional slipping into contemporary speech patterns in the characters’ dialogue, for example “It hurts so bad” and exchanges like “You deserve so much better than I’ve given you. “Walfort, please, let’s not go there.” And “Is that a threat?” “It’s a promise.”

It may sound like I felt there was nothing good about this book but in fact there were things I liked about it. I loved the setup that Ainsley felt obligated and guilt ridden toward Walfort. I thought Walfort’s character was thought-provoking, in light of the revelations about him. Much of Jayne’s stay at the cottage was both poignant and romantic. For a while, I believed that these two people were falling in love and wanted them to be able to be together.

Unfortunately, my positive feelings evaporated when Jayne returned home. I wanted so badly to know what Jayne and Walfort’s marriage was like in the wake of Ainsley and Jayne’s affair. Was Walfort jealous? Did he regret pushing them together? Did Jayne view Walfort differently after being with Ainsley? Did she feel lonelier in her marriage than she had before? More confused? And how did she feel when she learned she was pregnant? All of this was glossed over in favor of more trivial things.

At this point I am on p.317 and the improbabilities keep coming. The recently widowed Jayne has just received Ainsley in her bedchamber, in her nightdress, without even trying to hide this from her servants. I don’t feel motivated to keep reading.

I really did love the premise of the cousin/friend whom the hero felt responsible for rendering unable to sire an heir asking the hero to sleep with his wife. It is the unrealized potential for a gripping, romantic, complex story that has engendered my frustration and made me finally decide to put the book down unfinished. I know that other readers, like my friend, have enjoyed Waking Up with the Duke a lot more than I have, and I wish that I had as well.