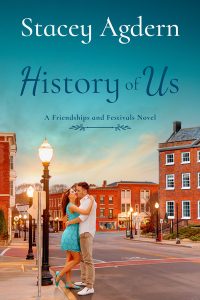 History of Us by Stacey Agdern

Do they have a future together, or is their relationship ancient history?

Anna Cohen, perpetual assistant at the Manhattan Museum of Jewish History, lands a golden chance to curate her own exhibit when her boss sends her to Rockliffe Manor, New York. She’s to assist an influential Jewish family as they organize an exhibit of their own in time for the town’s Summer Days Festival. While she’s there, Anna just needs to convince them to part with some of their archival history for an upcoming exhibition—something they’ve always refused—and not get involved with her ex, the family’s heir. Again.

Jacob Horowitz-Margareten wants to help save the world. Despite having no time to spend organizing his family’s archives, he’s always had a soft spot for Anna. The chance to spend more time with her intrigues him, but he doesn’t trust her boss or the museum she works for with the tangible bits of his family’s rich history.

As they work together, Anna and Jacob need to decide what’s more important: their history or the story their hearts are telling them.

Last Autumn, I liked the first book in this series but unfortunately, this one had a number of issues for me.

The writing is flat and the storyline is hard to understand, the interactions between Anna and Jacob are stiff and awkward with no chemistry between them while the actions of some characters are bizarre. Anna meets a bakery owner, suddenly seems to be best friends with her and then two days later is spilling her personal history with Jacob to this woman? The first day that Anna is in Charlotte’s bakery, suddenly Jacob emerges from the kitchen covered with flour and sugar after an afternoon folding dough. He’s an extremely busy executive and we’re (repeatedly) told how much is on his plate of things to do but he’s … spending hours folding dough?

It tries very hard. Too hard. I understand why the exhibits that Anna and Jacob’s mother talk about and work on are important. Jews are more than the Holocaust while Jewish history and voices telling their story need to be known and heard. But didactically explaining this over and over isn’t why I want to read a romance novel. The stolid “As you know, Bob” conversation that Jacob and his mother have about their own family history was clunky, too.  The pace is painfully slow and the writing is repetitive.

And then there is a thing I noticed in the first book that I thought was strange that is repeated here. Characters are often described by their skin color in really weird ways: “her skin as pale as the tips of her French manicure.”, ” [he] had waxy hair, the clear red undertones in his skin that smelled of alcohol even if his breath didn’t,” “the olive undertones in her skin were bright,” “His friend’s brown eyes were bright; he was having way too much fun with this. And he could see the pink undertones in his friend’s skin,” “her topaz eyes brightening the warm dark brown tones of her skin.”

It didn’t take long before all this stuff put me off reading any more of the book. DNF 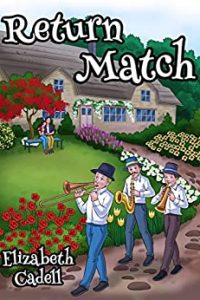 Celia Pressley’s cottage in the suburban town of Longbrook was not quite what Nigel, just back from Brazil, considered the ideal home for his mother. But incurable optimist that she was, she overlooked the draughts, the tangled garden, the rickety staircase, even the brass band that used the barn next door for practice, and found contentment in the cosily crowded rooms, unexpected flowers and blossoms, and the glimpse of a slowly-moving river from the gate. She had never given up on her hope that one day her son would marry her goddaughter, Rona, even though when he had seen her last, she was an awkward teenager and had a crush on Nigel.

Nigel was the playboy growing up. He dated many beautiful ladies and wasn’t ready to settle down. When he returned home from Brazil, he was surprised to see how much Rona had changed. Rona was determined not to let Nigel break her heart again…

This is the only Cadell book that hasn’t worked for me. As it began, I started to feel uneasy about some of the characters. There are a ton of them and some aren’t very nice at all. Even the ones who I feel as supposed to be “the good guys” often frustrated me at best and pissed me off at worst. I kept going though – through the excessively convoluted plot (and I’ve managed to stick with many convoluted Cadell plots) and the characters who made me twitch with irritation.

The female romantic lead seemed as if she could tame the male romantic lead who was one of the characters in the “dislike” column. I perked up as she repeatedly took him down a peg and served up some home truths about how life for women (the book was written in the late 70s) had changed. Then came the initial, followed by the rephrased descriptions of another character who is overweight. They would have made me cringe in years past but now I was horrified when I read them. I ended up skipping ahead by ten pages at a time to get the gist of how the plot was unfolding but that was all I could manage. D 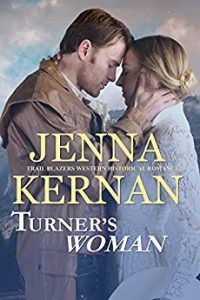 With him, she found the courage to break free. Jake Turner could have left the sole survivor of a Crow massacre to die at the hands of her captors. Instead, he bargained for her life. He can’t explain what he feels when he looks at her but knows it jeopardizes his secret mission. Now, he’s saddled with unwanted baggage, or so he thinks! But Emma Lancing is full of surprises. As bold and quick-witted as she is beautiful, she soon rouses his admiration and ardor as, day-by-day, she turns from a liability to the ideal partner. At first, Emma wants only to escape a bleak future under her abusive father’s boot-heel. She’ll risk everything to evade his tyranny and vows to never again be ruled by a man. But journeying with Jake makes her long to join him on his adventures and taste passion in his arms! For a woman determined to keep men out of her life, Emma may just have met her match.

It started off well. 1830s western frontier and the hero saves the heroine from the massacre that kills the white men she had been travelling with. The men had stolen something from a Crow chieftain burial site, been seen, caught, and were killed by Crow warriors. The hero, who knows some of the Crows, doesn’t attempt to stop this as he feels the men deserved it (grim but realistic) but he does intervene and save the heroine – though he really doesn’t want to as he’s got places to be, things to do.

The heroine is the daughter of a man who has built a huge trading fort. Dad is a bully who drove his wife insane before she decamped back east. The daughter doesn’t want to go but feels she has no choice as no one says “no” to dad.

The hero makes it clear to her that if she slows him down, he’ll leave her behind. Given how her father has treated her all her life, she’s terrified as she knows she’ll die (though she’s a great shot with both rifle and shotgun). Hero also vaguely tells the  heroine that Something Happened in his past that now makes him think all women are Evil Bitch Whores (although of course he thinks the heroine is gorgeous but he Won’t Be Tempted! since she’s a woman and thus also an EBW).

So on they go, struggling through the beauty of the Rockies. Then they reach the Great Salt Lake and things get even (WARNING!) grimmer. Like a horse dies of thirst a few days after they run out of water and they must drink its blood to survive.

Hero sets off to find water (it must be out here somewhere) and more descriptions follow of how awful the heroine’s situation is along with the other two poor animals left with her. Gah!

Hero finally returns with water, everyone/thing drinks and, delighted to be alive, the heroine hugs the hero who kisses her (remember she’s gorgeous) but then he remembers that she’s an EBW and thus must be tempting him!

At this point I skipped to the end (SPOILERS FROM HERE ON OUT) to see if the hero would ever pull his head out of his ass. He does but only after he gets the heroine pregnant and apparently gets mad at her for getting pregnant (since she obviously truly is the EBW he thought she was) and leaves or sends her away. She struggles back east to mom (who turns out not to be insane). Hero realizes he’s a shithead, truly loves that woman of his, and starts looking for her. He finally finds her but first is confronted by her mother who has more sense than anyone in the book. Mom calls the hero on his shittiness and questions whether or not he’s truly changed. Heroine rushes in and is all “Oh, you finally love me! I lurve you, too.”

Me, I would have made him sweat it for a long, long time. D