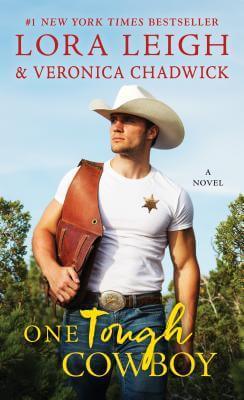 LAW AND ORDER.
For as long as Samantha can remember, Hunter—a man as strong as steel, with a heart of gold—has been her hero. It came as no surprise to Samantha when she found out that the ranch-hardened cowboy who always protected her from bullies went on to become the town’s sheriff. What does surprise her is how incredibly hot he still is. And how much she still wants him…

And, lo and behold, Hunter still has feelings for Samantha. The long-smoldering heat of their innocent flirtation has grown into a full-raging fire. But when tragedy strikes, and their small-town community is shattered, Hunter vows to do everything he can to keep his childhood sweetheart safe. But can Samantha trust that Hunter has her best interests at heart…and that, after all these years, his love is true?

I haven’t read any Lora Leigh books for a long time but I remember the sex was always pretty darn hot and the blurb of One Tough Cowboy appealed to me so I requested it from NetGalley. Well, most of the sex was pretty hot so I didn’t misremember but not much else about the book worked for me unfortunately.

The story takes place over a ridiculously short amount of time. When Samantha’s aunt is murdered (even though the Coroner has ruled it suicide, both she and the sheriff know it was not) she returns to Deerhaven, the small town in California where she lived the first 11 years of her life, to see to her aunt’s estate and to find the person responsible.

Sheriff Hunter Steele is eight years older than Samantha and when she was a child, he protected her from bullies and became her hero. She was a girl who was always getting into scrapes and took great delight in playing pranks on his girlfriends (like putting frogs on their heads) and Hunter called her his “Pixie Pest”. They ran into each other once when she was 17 and Hunter realised that Samantha was growing up to be a knockout.

However, it is not until the death of Aunt Dottie that they spend any time together after she’s an adult.

Hunter was appointed to the position of sheriff by the governor (his aunt) after his uncle (her brother), the former sheriff died in a mysterious “hunting accident” which Hunter and his aunt both know was no accident. The mayor’s wife also died in suspicious circumstances and Hunter is investigating what he is sure is the mayor’s corruption – something which has infected his own office and various other state officials. He doesn’t know their motives and he can’t trust many people in the community so he’s found it tough going.

As it happens, Samantha is a Detroit cop so she is well placed to help him in his investigation.

Once Samantha and Hunter are in the same location, their unspoken attraction flares to life and it isn’t long at all before they’re scorching up the sheets.

It all sounds good but the execution just didn’t work for me. There’s a lot going on but far more of the page count was spent on sex scenes which didn’t really grow the relationship  than unraveling the suspense plot. As a result, things happened which didn’t make sense, characters were introduced for no apparent reason (maybe they’re sequel bait?) and things which were important but which had been (it seemed) left out earlier in the story were shoe-horned in later in a kind of “oh yeah, I found that out and I forgot to mention” kind of way which felt stupid given that Hunter and Samantha were supposed to be working as a team.

Despite Samantha repeatedly saying she intended to return to Detroit after the case was solved, and despite turning down Hunter’s job offer to work for him in Deerhaven – inexplicably, the mayor is keen for this to occur as well – she quickly does take a job with him. And then it got uncomfortable in a new way because Hunter was her boss and the sex was not confined to out of hours. I get it was supposed to be hot but I’m far more sensitive to workplace issues than I used to be and it often just felt skeevy to me when Hunter would leer and make a sexual remark when they were supposed to be working.  Samantha does want Hunter (often and always) but she says (repeatedly) that they should not embark upon a relationship. Even though Hunter explicitly says that Samantha’s consent is imperative and her no is an absolute, he doesn’t have any issue with “trying to change her mind” and that felt uncomfortable too.

Non-local characters were also introduced fairly late in the book and it becomes apparent the corruption is far bigger than just Deerhaven. However, the motivations of the various characters often felt unclear to me and some of the things they did made no sense at all.

Content Warning: sexual assault.  Some may consider this is too big of a spoiler to include in a review, even behind a tag, but I privilege reader comfort over such things.

There was also a shocking and unnecessary sexual assault right near the end of the book (which didn’t stop Hunter and Samantha banging again almost immediately after which… just, no) and I felt it was wrong in all the ways it could be wrong. For instance, the bad guy, had he been remotely sensible would have killed Samantha and Hunter straight up instead of raping her and forcing him to watch – and if the bad guy was that stupid (and I could be persuaded there I suppose) the people he was with who were way worse and had far more to lose wouldn’t put up with that given what was at stake. And then there was the assault itself which was gratuitous and very uncomfortable for me to read.  There were other issues I had with this scene as well, on a number of levels but I’ll leave it here.

The bones of a good story were there and and outline of interesting characters in Samantha and Hunter but there wasn’t much by way of courtship or getting to know you (and after more than a decade apart it wasn’t unreasonable they’d have some of that to do) unless you count copious amounts of sex. Hunter, at 35, has a minuscule refractory period which can be measured in seconds and some of their timing had me raising my eyebrows – sex on a stakeout? Really?

→ Kaetrin
Previous article: REVIEW: Here and Now and Then by Mike Chen
Next Post: REVIEW: When You Read This by Mary Adkins