Review: A Husband for Hartwell (The Lords of Bucknall #1) by J. A. Rock and Lisa Henry 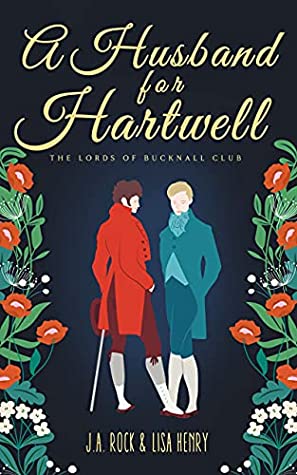 He must marry, or risk his fortune.

The whole of London Society has long assumed Lord William Hartwell will marry his childhood best friend, Lady Rebecca Warrington. After two Seasons, Hartwell remains quite content with bachelorhood–his parents do not. When Hartwell learns they intend to cut his purse strings unless he makes a match this Season, he resigns himself to a marriage of convenience with Becca, and yet he can’t help but be drawn to her younger brother, Warry.

He must marry, or risk his sister’s ruin.

The Viscount “Warry” Warrington is used to being viewed as the tagalong little brother. Now a grown man about to enter his second Season, Warry is desperate to be seen. When Lord Balfour, a handsome older peer, takes Warry under his wing, Warry thinks his dream is finally coming true. Until Balfour reveals his true intent–to make public a letter that will destroy Becca’s reputation, unless Warry agrees to marry him.

Time is running out for both of them.

When an injury forces Warry to recover at Hartwell House, the two succumb to a secret flirtation. But Warry’s sudden announcement of his engagement to Balfour drives Hartwell near mad with jealousy–and right into Becca’s arms. With the clock ticking for Warry to save his sister, will Hartwell discover the truth of Warry’s feelings before it’s too late?

A Husband for Hartwell is the first book in the Lords of Bucknall Club series, where the Regency meets m/m romance.

SOME SPOILERS IN THE REVIEW .

I was trying for couple of hours to think of something coherent to write after I read this book. This is the best I can do. I have read the second book in this series prior to reading this one and quite enjoyed it (I have read many books by this duo before and enjoyed some of their collaborations more, some less, but I certainly often find their books interesting enough to try). The books can be read out of order according to the authors, so I by no means regret reading the second book. I stumbled on the second book by accident. I stayed away from this one because I *vaguely* remembered that a book friend whose tastes I trust wrote the review and mentioned that one character was being an abusive ass to another character. There are few tropes that make me run for the hill faster than this one.

But then I have read the second one and couple from the first one appeared in the second book as supporting characters and they were so cozy and sweet and I thought, hey it cannot be that bad right? Wrong!

I actually did not think that Hartwell was the worst of the verbal abusers I had seen in the romance books – till 41 percent I did not even see it. I had seen the idiotic lack of communication, fear, jealousy, etc., but of course dear Hartwell nicely demonstrated how cruel he can be with his words. Maybe it is because his motivations were so aptly shown (being a jealous coward and an idiot), I did not at least doubt that he loved Warry (small mercies).

But overall his character gave me such whiplash because I think of “Regency meets m/m romance”. I have absolutely no issues with historical fantasy, I *love* well done historical fantasy, but man if one introduced the books with this proposition, shouldn’t the whole mentality of the society change significantly and change not just when it suits the authors’ needs for the plot?

This is how both books start:
“In 1783, the Marriage Act Amendment was introduced in England to allow marriages between same-sex couples. This was done to strengthen the law of primogeniture and to encourage childless unions in younger sons and daughters of the peerage, as an excess of lesser heirs might prove burdensome to a thinly spread inheritance.”

So, the society at this point should be mostly accepting of same sex relationships right? I understand that in this universe younger sons and daughters are encouraged to make same sex marriage to decrease the amount of heirs, but the amount of angst Hartwell goes through if he would go public (or at least share with his parents) his love for Warry rings hollow to me. Discouragement and making him think the relationship itself would ruin him are two very different things and I just could not figure it out, especially since, of course, everything works out to make all his fears for nothing.

Warry? Jesus and Mary (yes, I am using holy names in this review and no, I am not a Christian), to say that I found his IQ to be extremely low would be understatement of the century. And yes, while I understand one losing his head while being blackmailed, NO I don’t understand losing his head to such degree. I was done with this idiot when he decided that the blackmailer would not demand his hand in marriage AFTER SPENDING ONE NIGHT WITH HIM IF SUCH BLACKMAILER ALREADY LIED TO HIM IN THE FIRST PLACE.

And remind me again why would a man in this society would be concerned with his reputation? He is not a woman right?

We shall not mention sharing things with the sister with whom he is supposed to be extremely close, because I am trying to give him the “losing the head from blackmail” slack and trying very hard.

I decided these two very much deserve each other.