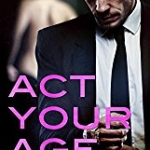 Review: Act Your Age by Eve Dangerfield A Review

Dear Ms. Dangerfield, This is the first book of yours I’ve read and the first book that I’ve picked up that involves “daddy kink.” There were a number of ways the kink was presented that did not involve or have incestuous undertones so that was a huge plus. Also, the ... more >