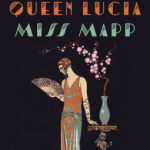 E. F. Benson’s beloved Mapp and Lucia novels are sparkling, classic comedies of manners set against the petty snobberies and competitive maneuverings of English village society in the 1920s and 1930s. Benson’s series revolves around two unforgettable characters, both forceful and irrepressible women who dominate their respective villages in southern ... more >

Other People’s Playlists: Spotify’s secret social network – Although I have the Spotify app on my phone, I never use it. But after reading this piece on the way Spotify “relates” songs and artists based on how people listen to them, I’m curious to get to know the service better. ... more >

I didn’t attend CES but I did read as much as I could about the digital book technology that was displayed there. Not everything that is shown at CES will ever come to market. Some of what is displayed are prototypes, working and sometimes non functioning. Some of the items ... more >

12 of 28 Employees Axed at LiveJournal: Start Backing Up Now

According to Gawker, LiveJournal has fired 20  12* of 28 employees. The company’s product managers and engineers were laid off, leaving only a handful of finance and operations workers ï¿½ which speaks to a website to be left on life support. If you haven’t backed up your LiveJournal articles, it might ... more >

A new study indicates that bloggers and social networks could have a direct impact on album sales. The research indicated that there was a direct correlation between the amount of “chatter” prior to the release of an album and its eventual sales. The more chatter, the better the album sold. ... more >