The 10 best books of 2017 – Although we’re positively besieged with “best of” and “must buy” book lists at this time of year, I appreciate the levels of diversity in this list, and despite the Saunders book (YAWN), there are some entries that may deserve a bit more of ... more >

Penguin pinged $30,000 for publishing the recipe book of fake cancer survivor Belle Gibson – Penguin Australia published a cookbook written by a woman who faked a cancer diagnosis, apparently asking her for fact-checking details, but ultimately publishing the book without getting them. The publisher cooperated with the investigation by ... more >

Friday News: Wattpad Studios, future of e-readers, a first for the US Army, and a career for insomniacs

Wattpad Wades into Hollywood with Wattpad Studios – We’re seeing more and more of these hybrid enterprises, demonstrating in part the way that stories are diversifying across media platforms, well beyond traditional books. Wattpad has been particularly ambitious in this regard, with initiatives like Wattpad Brands, which has Wattpad writers creating ... more > 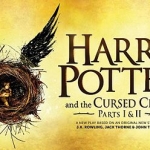 Harry Potter and the Cursed Child play is a sequel set 19 years after the last book – The 8th Harry Potter book will be out in June 2016, and it will be disguised as a play. Written by Rowling, Jack Thorne and John Tiffany, the story will pick up almost 20 ... more >