Never Trust a Sneaky Pony: And Other Things They Didn’t Teach Me in Vet School by Madison Seamans DVM James Herriot meets Jeff Foxworthy in the real-life adventures of a traveling horse doctor. Climb into the truck alongside large animal vet Dr. Madison Seamans and race to the aid of ... more > He cooks for their customers…but he’d rather cater to her heart! One impetuous, slightly drunken kiss has turned up the heat on chef Amar Virani’s feelings for Divya Shah. He’s been in love with the sexy pastry chef—his sister’s best friend!—since they were teenagers, but a painful tragedy in his ... more > 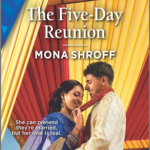 They ended their marriage, but they never fell out of love… Law student Anita Virani hasn’t seen her ex-husband since the ink dried on their divorce papers. Now she’s agreed to pretend she’s still married to Nikhil until his sister’s wedding celebrations are over—because her former mother-in-law neglected to tell ... more >