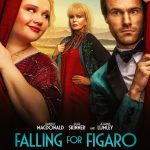 Falling for Figaro (2021) Genre: Romantic Comedy Grade B+ I was on an airplane and everyone knows that you watch movies on airplanes that you don’t normally watch at home (at least that’s true for me!). As I scrolled through the list, an image popped out at me. The cover ... more >

Young Frankenstein (1974) Genre: Comedy Spoof Grade: B+ “Ah, sweet mystery of life, at last I’ve found you!” When Mel Brooks is on, he’s fabulous and this is one of his directorial efforts which holds up for me just as well today as it did then. Over the years, I’ve ... more >

Victor/Victoria (1982) Genre: Romantic Comedy/Musical Grade: B+ Victor/Victoria has long been a favorite of mine for many reasons. It’s got a cast crammed with fantastic actors who inhabit their roles like a second skin, it’s funny, it’s poignant and it’s got Julie Andrews’ voice and Henry Mancini’s music all through ... more >

Bernard and the Genie (1991 BBC TV) Genre: Holiday Grade: Very cute While trying to decide on the next movie of this holiday season, I realized we were getting a bit top heavy with animation films. So a few are just going to have to wait until later. But what ... more >

Friday Film Review: Ziggy’s Gift and A Wish for Wings that Work

Ziggy’s Gift (1982) Genre: Holiday Animation Grade: B “Love is the answer.” Ziggy’s Gift is a 1982 TV special about Tom Wilson’s cartoon character Ziggy and his dog Fuzz trying to do the right thing. Ziggy wakes up one morning and while getting ready for the day, first hears a ... more >

Tokyo Godfathers (2003) Genre: Anime Dramedy Grade: B+ Looking for a Christmas themed movie that’s not gushy or overly sentimental? Or do you like anime? Then check this one out. Three homeless people, an abandoned baby and it’s Christmas in Tokyo. Ho, ho, ho. Gin – a middle aged man ... more >