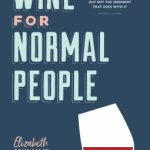 From the creator and host of the award-winning podcast Wine for Normal People, described by Imbibe magazine as “a wine podcast for the people.” Wine for Normal People is an unpretentious guide to everything you ever wanted to know about wine. Learn a not-snobby wine vocabulary, how and where to ... more >

Barnes & Noble Booksellers – Yesterday, Barnes & Noble and Microsoft announced that it finalized the formation of a new company called Nook Media which will focus on the college and digital markets. Microsoft invested $300 million for an approximate 17.6% equity stake and B&N will own the remaining 82.4% ... more >

How good is Harlequin doing? Pretty good. In a dismal economy that sees revenues at its parent company dropping, Harlequin is bringing in the profit. David Holland, the interim CEO at Torstar, said that the decline in newspapers and digital were offset by continued growth at Harlequin. (Actually Holland stated ... more >

California is having a terrible budget crisis.   One of the ways Governor Schwarzenegger is attempting to reduce educational will be to eliminate purchase of print textbooks and require the use of electronic textbooks. The pilot program will be launched next August.   High school students will be provided an ebook reader ... more >