Thursday News: News is bad for you, David Mamet to self publish, not so horrific paper crafts

Panicky stories spur the release of cascades of glucocorticoid (cortisol). This deregulates your immune system and inhibits the release of growth hormones. In other words, your body finds itself in a state of chronic stress. High glucocorticoid levels cause impaired digestion, lack of growth (cell, hair, bone), nervousness and susceptibility to infections. The other potential side-effects include fear, aggression, tunnel-vision and desensitisation. 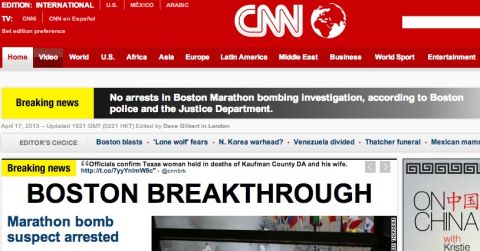 I thought it was particularly ironic given how horrible CNN appears to be botching the news. Look at the headlines that were on its website yesterday regarding the Boston Marathon bombing. The Guardian

The 15 Most Horrific Crafting Abuses Ever Committed Against Books – Buzzfeed put together a list of “horrific crafting abuses” which I thought were going to be a bunch of regretsy artifacts made out of books. But apparently horrific in this case equals any use of books that is destructive. “Accurate, because it feels like you’re carving out my heart when I look at this.” The paper lantern one looks like a fire waiting to happen but other than that, I was highly disappointed at the low level of horror achieved. Buzzfeed

David Mamet and Other Big Authors Choose to Self-Publish – Pulitzer Prize winner David Mamet will self publish his next publication with the help of his literary agency, ICM Partners. Mamet cited marketing as one of the reasons he is going the indie publishing route.

Both Mr. Harris and Mr. Mamet said that the big publishers focused mostly on blockbuster books and fell short on other titles — by publishing too few copies, for instance, or limiting advertising to only a short period after a book was released. NYTimes