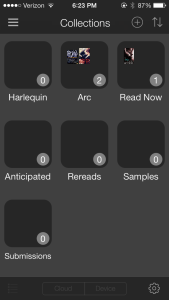 I might have released an audible squeal upon learning that the updated Kindle App for iOS7 has folders. You can easily create as many folders you like and then inside the folder, you add and delete at will.  Plus, your collections are synced with your account so the collections on your Kindle paperwhite appear on your Kindle iPad on your Kindle iPhone. I suspect that the Kindle Fire and the desktop apps are yet to come.  I’ve got some work to do.

The World’s 60 Largest Book Publishers, 2013 – Pearson is on top of the list of book publishers but was is driving the bottom line (other than huge phenoms like 50 Shades) is specialized technical books, education and then trade. Trade books encompass books sold to the general public rather than a special segment of society. Pearson and Reed Elsevier (who owns Thomson/West the legal and financial publishing companies) are the top two and Random House comes in 5th with Hachette close behind them. Interestingly, of the top 10 top publishing groups, almost all of them had more revenue in 2012 than 2011. Big publishing isn’t going away anytime soon. Publishers Weekly

“Under Bolger, speech can be characterized as commercial when it’s admittedly advertising, references a specific product, and is spoken with an economic motive. Commercial speech inextricably intertwined with otherwise fully protected speech becomes fully protected.”

None of the statements Armstrong made about his non use of rugs proposed a commercial transaction nor did the publicity efforts surrounding the book. And that even if they were, the commercial and noncommercial speech were inextricably entwined. Rebecca Tushnet’s 43(B)log