Recommended Read
Dragon Bound by Thea Harrison is recommended by E_. I am one of the Book Pushers from http://www.bookpushers.com I am also on goodreads as e_bookpushers.

I am recommending this book because I am recommending this book because it is the start of a very enjoyable series. I discovered it when I was released last year and have subsequently pushed it on my entire family. It has magic, paranormal creatures, intrigue, paranormal politics which are really messy, an unlikely heroine. It was a lot of fun to read and enjoy with the strong characters, vivid world and a nonstop pace. 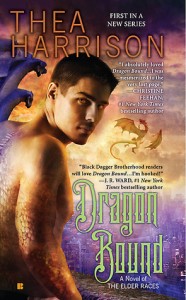 When he discovered the theft, Dragos Cuelebre exploded into the sky with long thrusts from a wingspan approaching that of an eight-seater Cessna jet.

Modern life had gotten complicated. His usual habit was to focus Power on averting aircraft when he flew or, simpler yet, just file a flight plan with the local air traffic control. With his outrageous wealth and position as one of the eldest and most powerful of the Wyr, life scrambled to arrange itself to his liking.

He wasn’t so polite this time. This was more a get-the-fuck-out-of-my-way kind of flight. He was blinded with rage, violent with incredulity. Lava flowed through ancient veins and his lungs worked like bellows. As he approached the zenith of his climb, his long head snapped back and forth, and he roared again. The sound ripped the air as his razor claws mauled an imaginary foe.

All of his claws except for those on one front foot where he held a tiny scrap of something fragile and, to be frank, inconceivable. This tiny scrap was as ludicrous and as nonsensical to him as a hot fudge sundae topping an ostrich’s head. The cherry on the hot fudge sundae was the elusive whiff of scent that clung to the scrap. It teased his senses into frenzy as it reminded him of something so long ago that he couldn’t quite remember what it was—

His mind went white hot and slipped from its mooring in time. Existing in his wrath he flew until he came to himself and began to think again.

Then Rune said in his head, My lord? Are you well?

Dragos cocked his head, for the first time coming aware that his First flew behind him at a discreet distance. It was a measure of his rage that he hadn’t noticed. Any other time Dragos was aware of everything that happened within his vicinity.

Dragos noted that Rune’s telepathic voice was as calm and neutral as the other male’s physical voice would have been had he spoken the words aloud.

There were many reasons why Dragos had made Rune his First in his Court. Those reasons were why Rune had thrived in his service for so long. The other male was seasoned, mature and dominant enough to hold authority in a sometimes unruly Wyr society. He was intelligent with a capacity for cunning and violence that came close to Dragos’s own.

Most of all, Rune had a gift for diplomacy that Dragos had never achieved. That talent made the younger male useful when treating with the other Elder Courts. It also helped him to navigate rocky weather when Dragos was in a rage.

Dragos’s jaw clenched and he ground massive teeth shaped for maximum carnage. After a moment, he answered, I am well.

How may I be of service? his First asked.

His mind threatened to seize again in sheer incredulity of what he had found. He snarled, There has been a theft.

A pause. Rune asked, My lord?

For once his First’s legendary coolness had been shaken. It gave him a grim sense of satisfaction.A THIEF, Rune. He bit at each word. A THIEF has broken into my hoard and taken something of mine.

Rune took several moments to absorb his words. Dragos let him have the time.

The crime was impossible. It had never happened, not in all the millennia of his existence. Yet it had happened now. First someone had somehow found his hoard, which was an incredible feat in itself. An elaborate fake setup complete with state-of-the-art security was located below the basement levels of Cuelebre Tower, but no one knew the location of Dragos’s actual hoard except himself.

His actual hoard was protected by powerful cloaking and aversion spells older than the pharaoh tombs of Egypt and as subtle as tasteless poison on the tongue. But after locating his secret lair, the thief had managed to slip past all of Dragos’s physical and magical locks, like a knife slicing through butter. Even worse, the thief managed to slip out again the same way.

The only warning Dragos had received was a nagging unease that had plagued him all afternoon. His unease had increased to the point where he couldn’t settle down until he went to check on his property.

He had known his lair had been infiltrated as soon as he had set foot near the hidden entrance to the underground cavern. Still, he couldn’t believe it, even after he had torn inside to discover the indisputable evidence of the theft, along with something else that trumped all other inconceivability.

He looked down at his clenched right foot. He wheeled in an abrupt motion to set a return path to the city. Rune followed and settled smoothly into place behind him, his rear right wingman.

You are to locate this thief. Do everything possible, Dragos said. Everything, you understand. Use all magical and nonmagical means. Nothing else exists for you. No other tasks, no other diversions. Pass all of your current duties on to Aryal or Grym.

Dragos sensed other conversations in the air, although no one dared direct contact with him. He suspected his First had begun giving orders to transfer duties to the others.

He said, Be very clear about something, Rune. I do not want this thief harmed or killed by anyone but myself. You are not to allow it. You should be sure of the people you use on this hunt.

It will be on your head if something goes wrong, Dragos told him. He couldn’t have articulated even to himself why he pressed the matter with this creature who for centuries had been as steady and reliable as a metronome. His claws clenched on his implausible scrap of evidence. Understood?

Understood, my lord, Rune replied, calm as ever.

Dragos noticed they had returned over the city. The sky around them was clear of all air traffic. He soared in a wide circle to settle on the spacious landing pad atop Cuelebre Tower. As soon as he settled he shifted into his human shape, a massive six-foot-eight dark-haired male with dark bronze skin and gold raptor’s eyes.

Dragos turned to watch Rune land. The gryphon’s majestic wings shone in the fading afternoon sun until the other male also shifted into his human form, a tawny-haired male almost as massive as Dragos himself.

Rune lowered his head to Dragos in a brief bow of respect before loping to the roof doors. After the other male had left, Dragos unclenched his right fist in which he held a crumbled scrap of paper.

Why had he not told Rune about it? Why was he not even now calling the gryphon back to tell him? He didn’t know. He just obeyed the impulse to secrecy.

Dragos held the paper to his nose and inhaled. A scent still clung to the paper, which had absorbed oil from the thief’s hand. It was a feminine scent that smelled like wild sunshine and it was familiar in a way that pulled at all of Dragos’s deepest instincts.

He stood immobile, eyes closed as he concentrated on inhaling that wild feminine sunshine in deep breaths. There was something about it, something from a long time ago. If only he could remember. He had lived for so long, his memory was a vast and convoluted tangle. It could take him weeks to locate the memory.

He strained harder for that elusive time with a younger sun, a deep green forest and a celestial scent that drove him crashing through the underbrush—

The fragile memory thread broke. A low growl of frustration rumbled through his chest. He opened his eyes and willed himself not to shred the paper he held with such tense care.

It occurred to Dragos that Rune had forgotten to ask what the thief had stolen.

His underground lair was enormous by necessity, with cavern upon cavern filled with a hoard the likes of which the world had never seen. The treasure of empires filled the caves.

Astonishing works of beauty graced rough cavern walls. Items of magic, miniature portraits, tinkling crystal earrings that threw rainbows in the lamplight. Art masterpieces packed to protect them from the environment. Rubies and emeralds and diamonds the size of goose eggs, and loops upon loops of pearls. Egyptian scarabs, cartouches and pendants. Greek gold, Syrian statues, Persian gems, Chinese jade, Spanish treasure from sunken ships. He even kept a modern coin collection he had started several years ago and added to in a haphazard way whenever he remembered.

His obsessive attention to detail, an immaculate memory of each and every piece in that gigantic treasure, a trail of scent like wild sunshine, and instinct had all led Dragos to the right place. He discovered the thief had taken a U.S.-minted 1962 copper penny from a jar of coins he had not yet bothered to put into a coin collecting book.

The thief had left something for him in place of what she had taken. She had perched it with care on top of the coin jar. It was a message written on a scrap of paper in a spidery, unsteady hand. The message was wrapped around an offering.

The theft was a violation of privacy. It was an unbelievable act of impudence and disrespect. Not only that, it was—baffling. He was murderous, incandescent with fury. He was older than sin and could not remember when he had last been in such a rage.

He looked at the paper again.

I’m sorry I had to take your penny. Here’s another to replace it.

Yep, that’s what it said.

One corner of his mouth twitched. He gave himself a deep shock when he burst into an explosive guffaw.