PRIDE WEEK: YA Recommendations by John

If you’re interested in any of the books I’m about to mention in this post, comment below about your favorite LGBTQ YA romance or why you’re interested in reading the book(s) I’ve mentioned.  This will enter you in a giveaway for these three books that will end 4AM EST on Friday.

As most people know, YA isn’t in the same genre as romance novels.  A lot of YA (Young-Adult) fiction deals with strong romances at the center or background of its plots, and it’s always a challenge to find YA novels that feature a strong, central romance that is LGBTQ.  Today, I’m going to highlight my three favorites that I consider more genre-oriented.  There are classics like Annie on My Mind and The Geography Club that feature romances as well – and they are worth a look as well – but they also feature a lot of angst over coming out.  The three YA LGBTQ romances I think everyone should read focus more on the relationships and encompass what I consider to be a great amount of LGBTQ pride because they don’t have a care about their sexuality.

Just in case this wasn’t established, this list is personal.  It’s by no means comprehensive or the definitive on good LGBTQ YA romance.  Without any further jabbering… 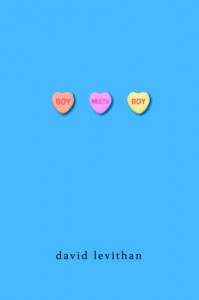 This book is probably my all-time romantic read for people who want to see a regular romance.  The plot is predictable and the romance is a basic boy-meets-(boy) story.  It is all done with a purpose, though, and that’s what makes it a win.  Levithan sets out to masterfully show readers that the formula can work no matter what sexuality the main couple represents.  It’s also been around for a while, but manages to have a pretty ethereal feel for a contemporary book.

The thing that readers will either find jarring or (in my case) spectacular is the fact that the world Levithan creates is a completely gay-friendly one.  The town the novel takes place in banned the Boy Scouts because it excludes gay people and created the Joy Scouts.  Can you imagine the star quarterback also being Prom Queen?  The transgendered star quarterback in Boy Meets Boy is.  LGBTQ teen romance is represented with a pure simplicity in this world, and it’s the perfect read for a reader – especially an LGBTQ teen – to escape in and realize that things can and will be good.  A great example of a book that has pride in its representation of LGBTQ YA romance. 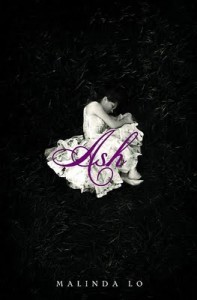 A fairy-tale with Chinese influence.  A retelling of Cinderella.  A lesbian main pairing that’s garnered a lot of well deserved attention.  These are some of the things that have made Ash a new break-out book in the YA genre, and Malinda Lo does a lot of them with fluidity and grace.  Her world is surreal and the romance that blooms between her characters is sweet and gentle.

What makes this book a worthy choice for pride week is something similar to what makes Boy Meets Boy worthy.  Ash shows an alternate, fairy-tale world where the pairing between two women is not the main conflict of the romance.  The romance between Ash and the king’s Huntress is one conflicted by rank more than anything.  Their gender means nothing to the love that blooms between them, and it’s pictured effortlessly.  The book itself is also more genre-fiction than most LGBTQ YA novels, which means the book hardly puts up a fuss about what identities its characters believe themselves to be. 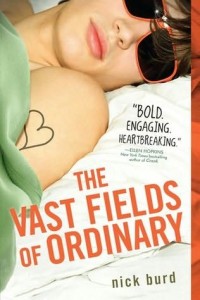 The Vast Fields of Ordinary by Nick Burd

The most angst-ridden of my choices, The Vast Fields of Ordinary is a YA novel that is criminally under-appreciated in my opinion.  It, unlike the other two, does take place with a character coming out, but he accepts his sexuality itself with gusto.  It also focuses on the romance the most.  The writing blew me over with how emotional and connective it was.

What makes this worthy of the pride week?  The romance is a big deal in this book.  It’s the main conflict and it’s angst ridden and filled with a lot of characterization in the mix.  The main character is in a fuck-buddy relationship with a closeted athlete, but quickly falls for a guy who isn’t popular or normal by any means.  The relationship is sweet and tender, and it explores a lot of feelings and emotions that go with being an LGBTQ teen in a relationship.  It’s the most ‘literary’ in terms of genre type of the three choices, but it’s a powerful book.

These books all hold a special place in my heart because of how they treat LGBTQ YA romance.  It’s not an afterthought of coming out.  The romance is important and, whether the mainstay or the in background  of the plot, it is well-done.  These books show LGBTQ teens that they can get into a relationship and have it be like every other relationship.  From first-hand experience, that is a truly awesome quality for an LGBTQ YA book to possess for readers.