DearAuthor Recommends for May 2007

No Humans Involved is the latest entry in Kelley Armstrong’s Women of the Otherworld Series. Jaime Vegas, necromancer, confronts her past while trying to literally put some ghosts to rest. Armstrong brings a new twist to the necromancer mythology by making Vargas one of the weaker paranormal creatures. She can’t cast spells, she doesn’t have super human speed or strength. But she begins to realize that power over the dead can be just as fearsome. Romance fans will be delighted with the inclusion of a quiet but meaningful romance between Jaime and Alpha Pack leader Jeremy who has been an important part of the series since its inception with Bitten. Jane (Hardcover, May 1, 2007)

Sandra Schwab brings back the gothic with May’s release of Castle of the Wolf. This Beauty and the Beast retelling is set in the Black Forest. Fenris, the eldest son of the Graf von Wolfenbach, lives in a castle that heroine, Cissy, inherited. Fenris is a true beast, given to black rages that stems from the fact that he was maimed in the war against Napoleon. When he returned, his family was disgraced and his fiance left him. Cissy is a 27 year old spinster who, at the death of her father, faces living as her brother’s unwanted relation. Owning her own castle, even if it does come with a Beast, is more attractive than being the unpaid nanny for the rest of her life. The fairy tale quality of the story along with the gothic overtones makes this an attractive and unconventional historical read. Jane (Mass Market, May 2007)

Loretta Chase’s Not Quite A Lady could also be titled Not Quite What We Were Expecting. Though steeped in Chase’s trademark charm and wit, this final book in Chase’s Carsington series is more serious and emotional in its subject matter than any of the previous Carsington books. The Carsington family has despaired of Darius, the Earl of Hargate’s youngest son, who is both a scholar and a seemingly heartless rake. In the attempt to make something of his son, the Earl of Hargate challenges Darius to make something of a dilapidated estate. But as interested as Darius is in that challenge, he is even more fascinated by the mystery his new neighbor Lady Charlotte Hayward presents. For beneath her perfect, polite exterior, Charlotte hides a thorny interior, and a painful past that Darius is determined to unearth. Readers will be reaching for their handkerchiefs and sighing over the romanticism of this tale. Janine. (Mass market, April 24,2007). 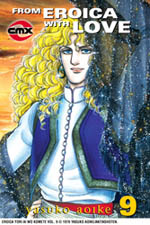 A flamboyant British art thief who looks suspiciously like Robert Plant. His nemesis, a wickedly cold East European NATO officer with an affection for tanks. They meet in volume 1 and keep up a love hate relationship for over 30 volumes. This long running (since 1976) witty shoujo series about the exploits of Dorian Red Gloria and his band of inept and stingy art thieves (Eroica) has kept manga readers entertained for decades. Their adventures take them around the world and into the paths of cold war spies, foreign royalty, and even into the pope’s bedchamber (it’s the best place to go when one wants to steal a pope). Don’t let the number of volumes scare you away; most of their stories are complete in one volume. Jan. (CMX is releasing vol 9 of From Eroica with Love in May 2, 2007.)