Madhouse by Rob Thurman is recommended by Jia. (Thurman is a woman if that matters to you and I have to admit I have a pro-female author bias so I thought I would throw that out there). Madhouse is a continuation of a series about two brothers which started with Nightlife and its sequel, Moonshine. Caliban Leandros, half monster, and his fully human brother Niko run a preternatural detective agency in New York City but their real mission is to put down the AUphe. The Auphe, a group of sadistic monsters from hell, bred Cal as their key to transforming the world into their own personal playground. Jia loves this series because there is great plotting, a fully realized paranormal world and, well, because the Leandros brothers are hot. They wield guns, serrated daggers, swords, and axes. I think if you love the Winchester boys of Supernatural, there’s a good chance you will love the Leandros brothers of Thurman’s books. 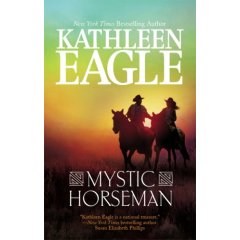 Mystic Horseman by Kathleen Eagle is from Jayne. Long time Eagle fans will recognize hero Dillon Black from “Ride a Painted Pony. He’s a struggling single parent who loves his kids and is trying to make a go breeding Indian ponies. His effort is helped when Ella Champion and her transformation reality show comes to town. Ella’s show is like Extreme Home Makeover except it focuses on fixing something that will benefit the community. In this case, it is Dillon’s horse camp which brings horses and the Lakota youth, descendants themselves of one of the Great Plains horse tribes, back together. If you are looking for a romance which provides a tribute to Lakota, you can’t get much better that this one.

Shaken and Stirred by Kathleen O’Reilly is another recommendation from Jayne. O’Reilly writes some of the smartest straight contemporary books on the market and while she’s had some misses, Shaken and Stirred is a bonafide hit. Gabe owns and runs a bar in New York called Prime. It’s been in his family for generations. Four years ago, Gabe gave Tessa a job and saved her life. Since that time, she’s been working toward gaining her independence which is symbolized by Tessa having her own apartment, maybe even owning. Tessa and Gabe know that there is something between them but Tessa is obsessed with the future and Gabe is all about today. As Jayne says, the story is “about Tess finding herself and gaining confidence to stand on her own and of Gabe deciding that love is worth making changes and waiting if you’re sure she’s The One.” edited to add, it is currently 1:09 am on the 3d of March and having just finished the book, I just wanted to say I think this book is awesome. Jane.

Please let us know what you think of our picks and give us your own suggestions. There are new readers everyday to DA and I just want you all to know that you can feel free to disagree with our picks. It won’t offend us at all!