READALONG/DISCUSSION of The Master and Margarita, Week 4 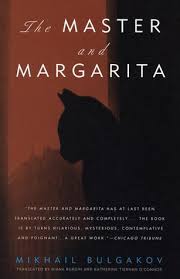 Welcome to the fourth and final week of our readalong/discussion of Mikhail Bulgakov’s The Master and Margarita. You can find the introductory post here, Week 1 here, Week 2 here, and Week 3 here.

And so we come to the end. We discuss the last six chapters and the epilogue and talk about the book as a whole.

After all the excitement of the previous weeks, this week felt a little calmer, although it certainly had its share of OTT behavior. But we finally get the resolutions of the various storylines and we bid goodbye, in several senses, to Woland and his retinue and other main characters. When we left off last week, Margarita had just finished reading the Master’s manuscript, we pick up with the Moscow police trying to make sense of all the havoc that Woland & Co. have wrought. Meanwhile, Woland is gathering his group together for a last big event in Moscow, and he’s considering the long-term fate of M&M. I don’t want to give away the ending, because it’s well worth coming to unspoiled, but we do find out what happens to everyone, both in the Moscow setting and in the biblical story. And we get another manic set piece featuring Behemoth. There can never be enough Behemoth in this book.

I thought the choices worked well for each character. You can see the influence of religion and spirituality on the choices Bulgakov makes for the characters, and they are just within that framework. The supporting characters, especially those who continue their lives in Moscow, are changed by Woland’s visit but they go on. Woland finishes with a flourish, but he doesn’t do as much damage as he could have, which makes me wonder if his observation in Chapter 12, that modern Muscovites were “In general, reminiscent of the former ones,” led him to be more merciful.

I think you did the best not-spoilers description of the ending possible under the circumstances.  I wanted to thank you once again for reading the book with me and doing those posts and as an important aside thank you for helping me to clarify the nit about the ending that bothered me for years.  When I say bothered I only meant that I was not sure I understood a certain part of the ending correctly.

Overall I was happy with the final act of the drama too.  I agree that it fits the story well and without spoilers there is really not much that I can add to your description.

Now that we’ve finished the story I want to talk about the book in general.  What is your final verdict as to why Woland and his team were sent to Moscow in the first place? Actually when I say sent, I am not always sure that this was the case.  Maybe Woland wanted to come and deliver whatever things he wanted to do on his own, who knows.  I mean I think it is made very clear that he obeys the higher powers , but important decisions by Higher Powers seemed to have been made as the story unfolds not before hand.  So I wonder how much was predetermined by fate and how much just unfolded spontaneously ?

What are some of the main themes of the book for you?  To me , besides religion and spirituality, Woland delivering justice to servants of the communist regime was always up there and very important.  Of course it is in big part a satire on the Soviet Union, but I thought that the argument that he was making was also that Satan and his demons are nicer people than a lot of those who work for this regime.

First, let me thank you in return for telling me how much you loved the book and reading it with me. I guess we should also thank the Higher Powers for putting the book on sale and providing the catalyst to finally get it to the top of my TBR! I knew it was considered a modern classic, and I knew it was the favorite of a lot of people, but I didn’t expect to be as captivated by it as I was. I will surely read it again, so that I can savor it as I go.

I think that Woland & Co. were sent (or sent themselves) to Moscow to show a society of avowed atheists that perhaps they shouldn’t be so sure about their beliefs. My husband, who is reading the book right now, pointed out to me that the Muscovites in the novel invoke the devil in their speech all the time, even though they claim not to believe in him. So Woland made their figurative speech reality. As powerful, punitive, and unpredictable as the Soviet government was, Woland was all that and more if he chose.

I can’t remember if I said this earlier in our discussion, or in one of our background chats, but Woland is the version of the devil who gets humans to act on their worst impulses, rather than directly forcing behavior. This is in line with Bulgalkov’s overall approach, which is to highlight the flaws of humanity as emanating from within. Evil and goodness coexist in his world, and they can’t exist without each other.

I agree that the parallels between religious and State demons are a major theme. He doesn’t think any more of dogmatic atheists than he does of Soviet apparatchniks; to him they’re both peddling false facts as “truth.” He returns to that theme in the final chapters, where the police and bureaucrats blame all of Woland & Co.’s actions on “foreign hypnotists.” It reminds me of that saying, “who are you going to believe? Me or your lying eyes?” Ivan, who writes about Jesus as a real person, is one of the few characters who grows and develops in his understanding of how the world really works, and he pays for it in terms of his mental health.

The satirical aspects, which frequently descend from funny to the grotesque, are so thick and deep that no one who doesn’t have a similarly deep and thick understanding of the Soviet system is going to catch them all. I got more of them once I could see parallels with other state-controlled systems, but I still missed a lot. But if a reader isn’t versed in Soviet history, she can still glean so much from this novel. If you’re an artist, Bulgakov has a lot to say about the relationship between artists and society, and about art, truth, and politics. The way that greed, ambition, and power corrupt ordinary people has a lot of resonance with our world today. And then there is Behemoth. How can you not respond to that cat? He is the cat of cats.

I keep wondering why Behemoth and his attics work so well for me.  I mean of course he is hilarious and disperses the punishments on his Boss’ orders and on his own initiative which made me laugh, but it is not as if an anthropomorphic animal is something terribly unique in literature.  So while typing my rambling responses I decided that big part of the reason why Behemoth works (besides the humor) is because most of the characters seem to ignore the most obvious part of his persona.  He is not, um, exactly a cat.  I mean it should be obvious to them that cats don’t ride on the trams, cats don’t send telegrams to the relatives of dead people. Heck, cats don’t send telegrams to anyone.  Oh and cats don’t dress up for the ball and don’t do many other things.  So it should be obvious that Behemoth is not exactly a cat and nevertheless the only person who makes such a comment is Master.  Everybody else may have been surprised by our cat but the comments feel as if cats are usually able to do s lot of things previously mentioned and Behemoth just went a little bit out of order.

I do agree that a lot of satirical commentary is rooted in the universal themes for many state controlled societies .  I mean sure Bulgakov based it on the specific experiences living in the Soviet Union in the thirties but to me his commentary is more than just discussing one specific country .

Woland just leaves such an impression on me every time I reread the book and part of the allure truly was that I could not quite get a grasp on why he was in Moscow in the first place.  Thanks for coming up worth the fun ideas and a lot of those make sense to me.

This is very true about Behemoth. I will only add that given what we experience with cats and their personalities, Behemoth embodies what we think cats might do if only they express their true selves. There’s something very cat-like about him, even at his least cat-like.

It has been a wonderful discussion, Sirius, and I hope readers will give the novel a chance when they are in the mood.