Warning: mysqli_query(): (22032/3141): Invalid JSON text in argument 1 to function json_contains: "Invalid value." at position 0. in /home/customer/www/dearauthor.com/public_html/wp-includes/class-wpdb.php on line 2187
 READALONG/DISCUSSION of The Master and Margarita, Week 3
July 20, 2018

READALONG/DISCUSSION of The Master and Margarita, Week 3 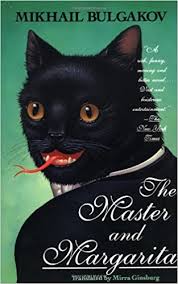 Welcome to the third week of our readalong/discussion of Mikhail Bulgakov’s The Master and Margarita. You can find the introductory post here, Week 1 here, and Week 2 here. Sirius and I will be talking about everything through Chapter 26, which takes us more than three-quarters of the way through the novel.

So after teasing us with a short appearance in Chapter 10, Margarita finally takes center stage in Book 2. And my goodness, she is worth the wait. We know from what we’ve read previously that she was deeply in love with the Master and supporting him as he wrote his novel. Although she is married to a perfectly nice and accomplished man, she doesn’t love him, and the Master calls Margarita his “secret wife.” When he disappears, she is heartbroken and has only a few mementos to remember him by.

But then, as she’s sitting on their old bench by the Kremlin, Azazello (who is one of Woland’s retinue) approaches her with a proposition. Margarita has a pretty good idea who is behind the proposition, and she accepts it. At the appointed time, she anoints herself with the cream he’s given her, instantly looks and feels a decade younger, and turns into a witch, complete with broomstick. And then the fun really begins. She flies over Moscow and its environs, wreaks vengeance on a particularly vicious critic of the Master’s work, and ends up in Apartment 50 to be the star attraction at Satan’s Ball.

I thought that the tone of the second book was different somewhat in comparison to the first one. More somber and not as funny? Which to me made perfect sense – Woland and company have fewer interactions with the awful people who occupy many positions of power in Moscow, they already delivered a lot of their hilarious smack downs to those who deserved it and now we get a chance to observe them in their um more natural habitat?  Of course as you said below Behemoth was still hilarious as always  and humor did not disappear completely but overall I thought the story took less amusing turn.

Margarita’s initial chapters really suited my real life mood this time. I really wanted to wreak vengeance on someone and do it in style, so for that reason I felt elated when I was reading the beginning of book two.

I found these chapters, from when Margarita accepts Azazello’s offer through the Ball, to be a nonstop thrill ride. Margarita is a wonderful character and she’s so different from most of the other people we’ve met. She has an enviable life from the outside, but all she really wants is to be reunited with her beloved. And she loves him so much. When she takes flight on her broom and goes after the flat of the critic, Latunsky, who lives in a posh new building for government-favored artists, she’s doing it for the Master, not for herself. She makes her pact to try to save him and recapture their life together.

The story really changes gears here, because now we’re directly in Woland’s world. This part reminded me of Faust, and also other theatrical and operatic pieces in which you have elaborate and complex balls as set pieces. Bulgakov’s theater expertise really shows through, as it did in Chapter 12. It’s dark and occasionally terrifying, and it’s very effective.

I agree they’re not as consistently funny, but we get relief from the intensity on occasion. Everyone dresses lavishly for the ball, including Behemoth:

“Well, what’s all this now?’ exclaimed Woland. ‘Why have you gilded your whiskers? And what the devil do you need the bow-tie for, when you’re not even wearing trousers?’ ‘A cat is not supposed to wear trousers, Messire,’ the cat replied with great dignity. ‘You’re not going to tell me to wear boots, too, are you? Puss-in-Boots exists only in fairy tales, Messire. But have you ever seen anyone at a ball without a bow-tie? I do not intend to put myself in a ridiculous situation and risk being chucked out! Everyone adorns himself with what he can.

I really like that Bulgakov made sure to establish that Margarita was married to a nice, handsome and well off man who loved her and the only problem was that she didn’t.  Once again I am not sure if I am remembering how I felt when I read the book for the first time or those were my later expressions, but I think that when I was first reading about her becoming a witch I felt as if this is how it was supposed to be. Woman overpowered by grief would do what Margarita did, because of course Bulgakov’s writing was that persuasive. Of course part of it was that I was already used to supernatural taking place on the pages of the book, but part of it was just myself being completely convinced by the genius writing.

The Ball was amazing and as you said, terrifying at times. I was amused that even at such obviously supernatural  event Bulgakov managed to inject the story of somebody who was trying to deal with his “housing issue” by expanding the apartment.  I also thought that Ball scene was vvery visual. I am not a very visual reader, but every little part came alive in front of my eyes and some of them I wish stayed dead.

Even when Woland offers Margarita her wish in return for her appearance at the ball, her first request is for someone else. Woland has to force her to ask for something for herself, and at that point the Master appears and they are finally reunited. He is disoriented and beaten down from his time in the mental institution, and she has to convince him that she really wants him, whatever condition he is in. It’s a lovely chapter and it made me sniffle a little.

I take it their love impressed you?  :) I am always amazed just how little space Bulgakov takes to establish such powerful connection between them.

Woland was also being his entertaining self when he meets Master for the first time.

“Do you know with whom you are presently speaking?” Woland asked the visitor. Whose guest are you? ‘I do,’ replied the master, ‘my neighbor in the madhouse was that boy, Ivan Homeless. He told me about you.’ ‘Ah,yes, yes,’ Woland responded, ‘I had the pleasure of meeting that young man at Patriarch’s Ponds. He almost drove me mad myself, proving to me that I don’t exist. But you do believe that it is really I?”

Woland (with the help, of course, of Behemoth, who is hilarious in these chapters) restores the full manuscript back to the Master, having told him that even though he tried to destroy it, “manuscripts don’t burn.” We then switch back to the Pontius Pilate story, which builds in force through the recounting of the aftermath of the crucifixion (as rewritten by Bulgakov). These chapters are stylistically a real contrast to the Moscow-set storyline; they are tight, focused, and no a word is wasted. Everything serves a purpose, and the atmosphere is stifling. There’s an interesting parallel in the two stories, because they’re both nearing resolutions but they’re not quite done yet, I think.

“Manuscripts do not burn” is another one of those quotes that became  quite widespread amongst Russian Intelligentsia of the certain age. I was not sure if it happened after the book was published, or Bulgakov just picked up on but apparently it did. Another one is when Koroviev makes sure that nobody would find poor Master missing from the mental hospital because he makes Master’s medical records go missing.

Koroviev flung the medical records into the fireplace. ‘No papers, no person,’ Koroviev said with satisfaction.’

“What you say is true,’ the master observed, struck by the neatness of Koroviev’s work, ‘that if there are no papers, there’s no person. I have no papers, so there’s precisely no me.”

I am sure you know about the phenomenon in the Soviet Union and I am sure it is still present in Russia called “propiska” where the person had to make sure they are registered at the place of their residence, this quote seemed very appropriate for the subject.

The almost end of Pontius Pilate’s story  felt almost desperate to me, because no matter what he did, he could not change what happened and he knew it I thought.

“Almost desperate” is a really good way to put it. The stories are reaching their conclusions, and in the Master and Margarita’s case we hope they’ve been given a measure of happiness together, but a deal with the devil is never without strings. And Pontius Pilate has also arrived at a resolution point, a more tragic one for both him and his society; but I have this feeling it’s going to get more intense, not less.

We’ll see what happens next week, when we wrap up the last chapters and reflect on the book as a whole. I’m excited to get to the end, but I’m also sorry, because what a journey this has been.