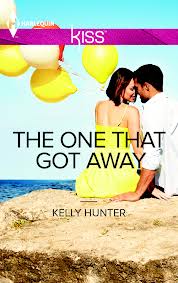 This month’s bookclub selection is Kelly Hunter’s “The One That Got Away.” ( A | BN | K | S ) This is a contemporary and despite the balloon covered frivolity, this is a darker book about reunited lovers.  I really enjoyed the book but I had some issues with the restraint the author showed during the story  and I thought it would be a great book for discussion.

Good job? Tick. Newly purchased apartment? Tick. Evie’s life is on a pretty even keel at the moment. The only thing missing? A man with an edge to keep things interesting. Enter Logan Black. Tortured, distant and sexy, Logan has edge written all over him. He’s also the man who tipped Evie over the edge a few years back – she gave him everything, but he didn’t know when to stop taking. Leaving Logan was the hardest thing Evie’s ever done. Until now. Because Logan’s back, the chemistry is as blistering as ever, and this time he’s not going anywhere…

→ Jane
Previous article: REVIEW: In the Heat of the Spotlight by Kate Hewitt
Next Post: Discovery of eBooks Will Never Improve Until Retailers and Publishers Learn to Speak Like Customers