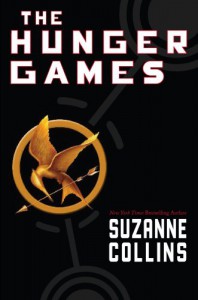 On October 15th, Dear Author will host a book club event for Suzanne Collins’ Hunger
Games. This is a book that was recommended by Jia. It’s a story about a sixteen year old girl who offers herself up as a Tribute in place of her younger sister, as a player in the annual hunger games, whereby 12 children compete to the death to win a year of boon for his or her district and a lifetime of wealth for themselves.

This is a gripping story. With twists, turns, and lots of action, it kept me on the edge of my seat. Not only that, there’s no denying the power of its themes. War and violence leave scars on the next generation. Haymitch may be the town’s middle-aged drunk but can you blame him? Not did he survive a brutal battle to the death, now as a victor he must mentor future tributes. That hurts. Imagine getting to know these children, coaching them, hoping for their victory- and then watching them die. Year after year, that has been Haymitch’s fate. Of all the things he could have resorted to in order to cope, drinking might be one of the least destructive options available.

I can’t recall that we’ve ever hosted a Book Club before so we are bound to do it weirdly but we hope you will come on October 15th and participate in a discussion of the book including speculation on where it will go.

Also, if you are reading this in your feed reader, you’ll note that there are ads on the bottom of the feed. This is intentional. We have added Google Adsense ads to the feed where we think it will be the least intrusive. The way we get paid is if you click on an ad but don’t feel compelled to do so.

→ Jane
Previous article: Purchase details re: Patricia Briggs and JR Ward
Next Post: I take everything back about Virgins