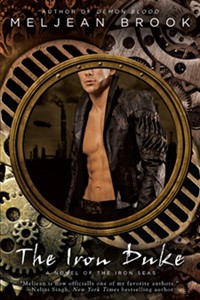 The Iron Duke by Meljean Brook has captured the attention of thousands of readers. We are big fans of this book here at Dear Author but don’t just take our word for it. 387 Goodreads readers have given the book an average of 4.40 stars and it is a nominee for the best paranormal romance at Goodreads in 2010. Over 55 reviewers at Amazon have rated the book an average of 4.5 stars.

Around the blogosphere, you can read any number of reviews. From Hilcia at Impressions of a Reader:

I loved The Iron Duke. It’s a fast paced adventure with intrigue and excellent worldbuilding. I loved all the characters, both central and secondary — heroes and villains — the steampunk details and atmosphere.

Up until a few weeks ago, if you told me I would be knee-deep and utterly enthralled in a “Steam Punk” book I probably would have laughed out loud and declared on the spot where my reading loyalties lie. I’m a Vampires, shape-shifters, demons, etc. kinda gal. I’ll even stretch for a fallen angel here and there, although he better be bad arse or forget it!!

and while this isn’t the most positive review of The Iron Duke, I thought it was a great one nonetheless by Byrt at BookYurt:

Meanwhile, there are AMAZING ideas cluttering up the background of this story and it is painful to watch them be passed by in favor of the romance. The social tensions between the people who survived the Mongol occupation and those who fled and have now returned (i.e. those who have nanites in their blood and those who don't); the mysterious Blacksmith who can create living metal; the actual plot behind the murders; the Duke's history as a slave; how Mina's wonderful relationship with her adoptive father came about when her parents were initially so disgusted by the sight of her; how she can possibly get her job done when she's spit on by just about everyone she sees; the fear of a weapon that could control everyone who has nanotechnology in their blood (a second coming of the nightmare of Horde control); whatever happened to the Horde and why they haven't tried to take over Britain again; the emotional damage to those who were puppets under the Horder's control – I absolutely loved all of this, and it is all glossed over and rushed past in favor of Mina's utterly stereotypical romance. ARGH.

I think the BookYurt points out that there is a lot for us to be talking about in regards to The Iron Duke and I invite you to join the bookchat to begin at 8 PM CST tonight. Meljean Brook will join us at 9 PM CST so that the readers can chat about the book and say anything we like without the author looking over our shoulder. Come and let’s discuss.