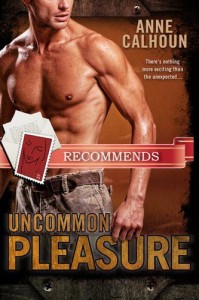 1 – What was the inspiration for this duology?

Ty first appeared in a Quickie I released through Ellora’s Cave called ON THE EDGE. I intended him to play a very minor role in the story when I drafted it, but the moment he showed up at No Limits, the bar where so much of the action takes place, he was a smart-ass, wounded as hell, and honestly, a little more interesting than the hero, John, at that point. I had to consciously tell Ty to go sit and be broody elsewhere while I finished John and Lucy’s story.

Later I was approached to write Ty’s story for an opportunity that didn’t pan out. This left me with a finished novella…and Sean, another hero who intrigued me in a completely different way. I wrote Sean and Abby’s story later in 2011, with the idea of writing a book comprised of two separate stories woven together by the characters’ decisions and choices.
2 – Your work is often novellas or shorter stories, but they never seem to short change the romance. Is writing in a short format more challenging or easier for you?

As for not short-changing the romance…that’s the whole point! If what the characters do in bed (or against a wall, or in the back seat of a car) doesn’t land like a grenade in their relationship, then I’m not doing my job as a romance writer.

3 – Ty would definitely classify as a slow to warm up hero, occasionally being deliberately cold to Lauren. Did you worry at all the readers would have a hard time identifying or rooting for him?

LOL! No! I was pretty sure Ty was a classic wounded alpha. I was more worried readers would find Lauren’s confident response to him off-putting. She’s no blushing virgin, not by a long shot. There’s one scene where Ty’s behavior might cross the line from wounded into mean, but I like a big fall before the HEA. J

4 – Thematically, all romances are about the redemptive power of love, but this theme seems intensified in cases where the heroes have experienced the theater of war. Why do you think this is?

As a writer I’m very interested in the aftermath of war, in how that kind of service and experience affects the characters’ relationships with the people they love, or want to love. Ty and Sean both served in Afghanistan, and for both of them, that experience wreaked havoc on their relationships. Ty’s haunted by something he feels he should have prevented, but didn’t. Sean felt he had to choose between the girl he left behind and the men under his command, but that fifteen months he was a platoon lieutenant isn’t the rest of his life. Making those choices, facing combat, will change a person forever. The people who willingly put themselves on the front lines of anything – war, police work, social service of any kind – provide good fodder for creating complex characters with wounds and fears. They know things about themselves and the world that make it harder to love…and make their love that much sweeter in the end.

5 – Sean is one of my favorite hero types, a Caregiving Alpha, which is quite a juxtaposition from Ty. Was this a deliberate choice?

I love Sean. I freaking, flat out love him. I love his nuances, I love his patience, I love his brains and his determination, I love how he sees his flaws and tries to overcome them in his own geeky way. So yes, it was a deliberate choice.
6 – Was the decision to include ménage scenes in both stories and editorial choice? Or yours? And how do you think the scenes inform the story and the development of the relationship between the romantic leads?

The decision to include ménages in both stories was entirely mine, and intentional. I mirrored the final sequences to set up a sexual chain of events that trigger actions and emotional consequences for all the characters.

Ty’s fighting his attraction to Lauren, so he tries to drive her away by suggesting she sleep with Sean. Lauren, because she’s sexually adventurous and not about to let Ty get the upper hand, ups the ante by suggesting the ménage, something she never would have if she knew about Sean’s situation with Abby. Because Sean’s distraught over losing Abby for good (or so he thinks), he agrees to the menage. But during that ménage Sean learns something about who he is and what he wants that night, so he sets out to get Abby back. When Abby finds out what Sean did with Ty and Lauren, she makes a decision of her own, one that’s motivated by hurt and fear – the same fear she’s had all along with Sean, that she’s not enough for him – and sets up the second ménage.

Characters are composites of their experiences. They do things that are perfectly in character (Ty and Lauren) and they normally wouldn’t (Sean and Abby), with consequences all around. In other words, bringing someone else into bed will impact their relationship with each other, with the third character, and all of their relationships as well…especially if things are already strained (as they are in romance novels)!

Over to you readers, what did you think of Uncommon Pleasure?