BOOK CLUB: The One That Got Away by Kelly Hunter 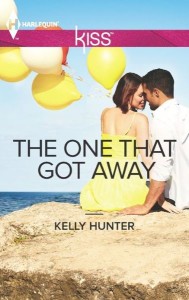 1) What was the genesis of your story?
A bunch of romance author friends and I were comparing Presents alpha heroes to the likes of Christian Grey and Gideon Cross. Dominant behavioral traits defined them all, yet Presents heroes didn’t really dominate in the bedroom. Was this a line constraint? Given the success of books like FSoG and BTY, would it stay a line constraint? After a hard day at the office, did a 21st century alpha hero really just want to come home and sub?

We talked about incorporating D/s sexual dynamics into sexy category romance. Would the sex scenes need to be fully realized and described? Could you load up the subtext and go easy on the details? Would glossing over those details limit exploration of character? Limit the resolution? Would readers feel short-changed? I really wanted to explore these questions, preferably within the framework of story.

2) What is the theme or overriding concept, as you understand it, behind the KISS line?

I put this question through to KISS Senior Editor Bryony Green.

Bryony: Harlequin KISS is flirty, fun, fresh and contemporary! It is a brand new series that reflects the way 25 – 35 year olds actually find love today. It’s about spirited, independent women – their lives, work, friendships and how they meet the guy who’s right for her. And when you’re talking about women who know what they want and don’t need a man to make their life complete, these men have to be super-hot and alpha in a totally 21st century way! The guidelines are here: http://tinyurl.com/9wmcmtd


3) The balloon covers indicate a fairly light hearted romance but the story of Evie and Logan is fairly dark. Did the tone evolve or did you know going in, that this would be a darker romance.

I knew going in that this story would be darker and more experimental than my usual. I got the go ahead from editorial and started writing. The cover came later. More on the cover later.

4) Was there any thought to Evie and Max having a romance? Why or why not?

The first scene I wrote for this story was that of a newly engaged Evie meeting Max’s family for the first time and realizing that she’d once been madly in love with his brother. I liked the inherent conflict. Max’s brother would be the hero. It could have gone either way at that point, but that was the direction I chose. Given that Max wasn’t going to be the hero, I needed that initial engagement to be one of convenience so that he could walk away unscathed. Cue the set-up of Evie and Max agreeing to marry in order to access his trust fund. I don’t often work backwards to get to the set-up, but this time I did.
5) Logan’s feelings toward Evie were conflicted due to his past. What changed in the intervening time? His control or his feelings overcoming his desires?
For me, what changes for Logan is that he learns how to trust. Logan trusting in himself more, as he tries to navigate an intense love relationship without doing damage. Logan trusting that Evie can hold her own with him and rein him in, both in the bedroom and out, should he ever go too far.

6) The dark feelings that Logan had exhibited themselves in a sexual manner yet the sex scenes are rather restrained and there was no attempt to work those control issues out in the bedroom. Was that intentional? Why did you choose to go that route?

Initially, I wrote sex scenes for the story that included pain play and breath play. This let me explore bedroom control issues more (though I never fully resolved them) and shone a different light on character. It made Logan more confronting and the story very dark. If I’d had to label the story at that point, I’d have called it erotic romance. Not a problem. I’d gone into this story perfectly willing to pick at the edges of what was sexy category romance and what was not. I took the breath play out. Reworked the characterization. Took the pain play out. Tweaked. Put it back in. Tweaked. Took it back out (drove myself nuts…).

Other factors came into play. I’d written the story with a Presents Extra audience in mind but then my publisher told me that the story was going to open for KISS. Fantastic, but the potential audience for the story had just become a mystery box. I saw the cover (And it’s sweet and romantic and contemporary and… doesn’t fit the story at all). My story had identity issues. My cover had… balloons.

I have no sway over cover concepts. And this cover was pulling double duty in representing not just my story but an entirely new series. Some KISS stories don’t have explicit sex scenes in them at all.

I took another pass at the story. By now I’d pushed just about all of the sexual pain play and a lot of the sexual power play into subtext. Would readers feel short-changed by this decision? I’d soon find out. I’d wanted to find out.
*note to self: Next time you get curious, Kelly, step away from the manuscript and go visit Madagascar. Plenty to satisfy curiosity there.


7) Do you intend to write more for the KISS line or the HP line? Or, in other words, what are your next writing plans?

I’ve another KISS story on the go. Amnesia. I love this trope. It’s my duty as a proud category romance author to twist this trope at least once. As for writing straight Harlequin Presents, I’ve never actually written for HP editorial, even though 3 or 4 of my stories are packaged as such. It’s complicated. Will a simple ‘I’ve no plans to write for HP editorial’ suffice?

I have a single title contemporary romance in the works and a fifteen thousand word story that’s coming out in May as part of an Entangled Anthology called When Honey Got Married... . Collaborating with Kimberly Lang, Anna Cleary and Ally Blake on this project was an absolute joy. Four linked stories. One big Louisiana society wedding… My story’s called Nina Tempted The Lord. Yes, really.

Thanks for the Book Club pick, Jane, and the opportunity to answer a few questions

Over to you readers. What were your thoughts on “The One That Got Away” by Kelly Hunter.

→ Jane
Previous article: REVIEW: The One That Got Away by Kelly Hunter
Next Post: REVIEW: Hysteria by Megan Miranda