This month’s Book Club pick is Guardian Demon by Meljean Brook. It’s the conclusion to a long running series about guardian angels, demons, humans, and vampires. My favorite review is probably Brie’s from Romance Around the Corner. It has illustrations and everything. The world that Brook created is vivid and big and the conclusion to the series fit it perfectly. I don’t think you can start with Guardian Demon although Meljean does have a “story so far” conclusion that you can read before each book in the series.

But even for non readers of the series, you may be interested in the evolution of the series and what lies ahead for one of our favorite authors, Meljean Brook. 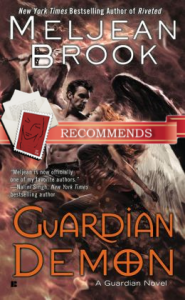 1)  When you started this series, did you have a clear vision of where you wanted to end up or did that evolve over time?

Both. I had a clear vision of the overall story arc. I knew which layers of the worldbuilding I would be peeling away as the series progressed, I knew major plot points (especially those involving Michael, the Guardians’ leader), and I knew everything that I needed to accomplish before I reached the final book in the series.

But aside from the first two books and the final book, I didn’t know which characters I’d be using, or exactly how those characters would influence the way that those established plot points would unfold. For example, in the first book I hadn’t even thought of characters like Jake, Irena, or Rosalia — yet they play incredibly important roles in their own books and in other books. When I began the series, they were (at best) vague shadows floating around in my head. I had a few heroes that I’d never intended to give their own books — Jake was one, Deacon was another — but when I wrote them in supporting roles in earlier books, I either liked them so much that I couldn’t help myself (Jake) or I hated them so much that I thought the effort of converting them would work well in the upcoming book (Deacon). For other characters, I knew that I’d eventually make them a hero/heroine, but I waited to use them because they would best fit a certain plot point. Irena was one of those — I hinted at her existence in book #3, really introduced her in book #4, and then gave her book #5 — because that was the book where everything changes and goes to hell, and her character was the best to step in and (avoiding spoilers) fulfill a certain role.

So for the worldbuilding, that was always solid — I didn’t make up anything as I went along. The same goes for the overarching storyline. But the characters were never set in advance, because for each story, I wanted to make sure the characters’ conflicts and that plot point resonated as strongly as possible. And although I could look forward and plan ahead for some characters, until I actually wrote the book I didn’t always know how it would work out.

2)  How do you keep track of your series details? Do you have a book? A spreadsheet?

It’s all in my head.

3)  I love the “story so far” feature on your website where you summarize the past events up to the current release. How did you come up with that idea?

Even though I kept the world in my head, I knew readers wouldn’t be doing the same. Not only is there a lot of information to take in from my series, most readers I know are consuming romances voraciously — that means they have a lot of different worlds and rules to keep straight. There was also a six-month break between books in the series (and later, that time between books increased to over a year.) So I thought I’d help readers out and remind them of the important plot points that came before the current book in the series.

Plus, I knew that many new readers were intimidated by the length of the series. When new books came out, I often read questions like: Can I start here?

I found that question was impossible to answer. When it comes to series, every reader is different. Some *have* to start at Book #1. Some readers jump around in the series. Some new readers picked up Books #5, #6, or #7 and had no trouble following along; other readers were completely lost. And in each book, I spent as much time as I could re-explaining the worldbuilding and the history in the series so that new readers could follow along, but that explanation is always intertwined with the narrative and given in bits and pieces as the reader goes along. It’s not a straightforward explanation, and keeping track of “what went before” at the same time the book is moving forward isn’t always easy.

So the Story So Far is designed to give that straightforward explanation.

4)  Do you worry about “spoiling” the series for readers?

No, not really — and for two reasons. I assume that if a reader is starting with Book #6, that reader is going to be spoiled anyway. I’d much rather that a reader be spoiled with big plot points than be confused. (Not every reader would agree, I’m sure, but I assume that reader will see the spoiler warnings and turn away, anyway.)

Secondly, if a spoiler erases the emotional impact of a plot point, then it means I didn’t do my job very well. The *surprise* will be ruined, sure — and that is never fun, for readers or for writers. But if the only reason a plot point resonates with the reader is because it was the equivalent of jumping naked out of a birthday cake … that book isn’t going to hold up. If I do my job well, then that spoiler becomes a tease, instead. It will make the reader want to go back and found out how [that spoiled thing] happened.

For me, that is the real point of these books anyway (and any book). It’s not about a single plot element that can be spoiled — it’s about the adventure and the relationships, and all the small things that happen between the big moments. That’s where a lot of the best stuff is.

5)  I know you are an avid reader yourself.  Who are some of your romance influences? How about your writing influences, if different?

I used to be an avid reader. I haven’t read as much in the past few years. *sob*

Every time I name influences, my answer seems to change. I’m not sure why. There are days when I feel like my greatest influences are all the Harlequin writers from the 80s and 90s, because I was a category-reading fiend — starting when I was eight. But that also included a lot of older Harlequins, because my grandma had a spare bedroom full of them and I sneaked a ton of books out of there. Johanna Lindsey, no doubt. I read some of the classic bodice rippers, but they weren’t my favorites, and I didn’t read nearly as many of them as I did the Zebra hologram single-titles and the like. Then Silhouette Shadows came along and changed my life, because although I’d read other PNR romances before that, they were few and far between. Suddenly, there was an entire category line! Heaven.

So I’m sure that those books influenced me and my idea of romance as a genre — along with Jane Austen, all kinds of fairy tales, and Terminator. But so did Superman and Lois, all kinds of not-so-happy books, Anne Rice and Anne Bishop. It’s so difficult to point to a few, just because I start thinking of other books that influenced me, and the list always seems endless. Maybe I’m easily suggestible.

My writing influences come from everywhere, and the same thing happens when I begin to name them. Basically, I write what I like to read — and so I think about the things I’ve liked when I write, and those influence me the most. For pure technical issues, Stephen King’s ON WRITING was the only book on writing I’ve ever felt spoke to me and my process. And when I was struggling with my novella writing, I read a few favorite paranormal/SF novellas over and over to figure out why they worked for me. Those included Patty Briggs’s “Alpha and Omega,” Marjorie Liu’s “A Dream of Stone and Shadow,” Angela Knight’s “Roarke’s Prisoner,” (AK also has a great article here about keeping novellas simple), Kresley Cole’s “The Warlord Wants Forever,” and a few others.

6)  How do you feel that the series has come to an end? I’ve been reading reviews and readers were thrilled with the final book, feeling you really delivered, yet sad that the series is over.
I didn’t do everything I wanted to do with that last book (I cut out a few subplots that would have tied up a few minor plot threads), but for the most part, I’m really satisfied with how the series ended and that I accomplished almost everything I set out to do at the beginning. I’m glad I stuck to my plan of eight books and gave a solid finish. I could drag it out, because the world is complex and I could always fit more stories in, but the big story I wanted to tell is done and I feel like I should leave it there.

Which doesn’t mean I might not revisit these characters for small stories. I have a novella planned from one of the cut subplots (a companion story, but not something necessary to read to understand/enjoy GUARDIAN DEMON) and there is one other loose thread that I want to tie up — but if I do, it would probably be a story with an entirely different feel to it than the Guardian series. I can’t see that as a series, though, but just a one-off.

7) What is next for Meljean Brook?

More Iron Seas and steampunk romance! I’m working on THE KRAKEN KING right now. And I’m tossing around a few ideas for other books, some in series and some standalones, but there’s nothing official yet.

→ Jane
Previous article: REVIEW: Dark Waters by Toni Anderson
Next Post: REVIEW: Caught Up in You by Roni Loren